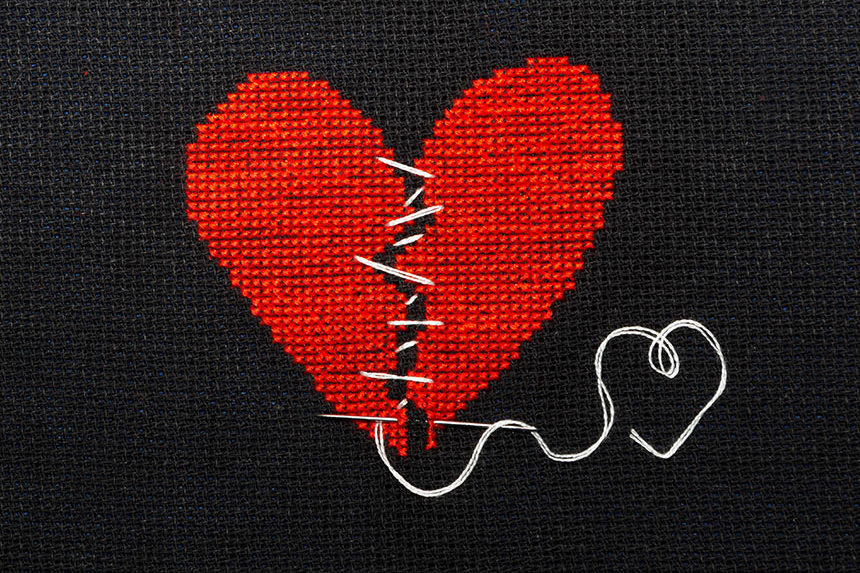 The heart bestows life and death. It also instigates metaphor: It is a vessel that fills with meaning. The heart has always been linked to bravery. Even the word courage derives from the Latin cor, which means “heart.” A person with a small heart is easily frightened. Discouragement or fear is expressed as a loss of heart.

The richness and breadth of human emotions are perhaps what distinguish us most from other animals, and throughout history and across many cultures, the heart has been thought of as the place where those emotions reside.

The idea that the heart is the locus of emotions has a history spanning from the ancient world. But this symbolism has endured. If we ask people which image they most associate with love, there is no doubt that the valentine heart would top the list.

The heart shape, called a cardioid, is common in nature. It appears in the leaves, flowers, and seeds of many plants, including silphium, which was used for birth control in the early Middle Ages and may be the reason why the heart became associated with sex and romantic love (though the heart’s resemblance to the vulva probably also has something to do with it). Whatever the reason, hearts began to appear in paintings of lovers in the 13th century.

Later, heart-shaped ivy, reputed for its longevity and grown on tombstones, became an emblem of eternal love. This association between the heart and different types of love has withstood modernity. When Barney Clark, a retired dentist with end-stage heart failure, received the first permanent artificial heart in Salt Lake City, Utah, on December 1, 1982, his wife of 39 years asked the doctors, “Will he still be able to love me?”

Today we know that emotions do not reside in the heart per se, but we nevertheless continue to subscribe to the heart’s symbolic connotations. Heart metaphors abound in everyday life and language. To “take heart” is to have courage. To “speak from the heart” conveys sincerity. We say we “learned by heart” what we have understood thoroughly or committed to memory. To “take something to heart” reflects worry or sadness. If your “heart goes out to someone,” you sympathize with his or her problems. Reconciliation or repentance requires a “change of heart.”

Over the years, I have learned that the proper care of my patients depends on trying to understand (or at least recognize) their emotional states, stresses, worries, and fears. There is no other way to practice heart medicine. For even if the heart is not the seat of the emotions, it is highly responsive to them. In this sense, a record of our emotional life is written on our hearts.

Fear and grief, for example, can cause profound myocardial injury. The nerves that control unconscious processes, such as the heartbeat, can sense distress and trigger a maladaptive fight-or-flight response that signals blood vessels to constrict, the heart to gallop, and blood pressure to rise, resulting in damage.

In other words, it is increasingly clear that the biological heart is extraordinarily sensitive to our emotional system — to the metaphorical heart, if you will.

Perhaps more than any other area of medicine, cardiology has been at the forefront of technological innovation and quality improvement over the past 50 years. This golden period has witnessed a barrage of life-prolonging advances, including implantable pacemakers and defibrillators, coronary angioplasty, coronary bypass surgery, and heart transplantation. Preventive health initiatives, such as smoking cessation and cholesterol and blood pressure reduction, have supplemented these biomedical advances. The result has been a 60 percent drop in cardiovascular mortality since 1968, the year I was born. There are few stories in 20th-century medicine that have been as uplifting or far-reaching.

For a while it appeared that cancer would replace heart disease as the leading cause of death in the U.S., but no more. The rate of decline in cardiovascular mortality has slowed significantly in the past decade. There are many reasons for this. The fall in smoking rates has leveled off. Americans have become more overweight. Diabetes cases are projected to nearly double in the next 25 years. But I believe there is another reason, too. Cardiology in its current form might have reached the limits of what it can do to prolong life.

The law of diminishing returns applies to every human enterprise, and cardiovascular medicine is no different. For instance, ever since coronary thrombosis was shown to be the cause of most heart attacks, cardiologists have taken it as an article of faith that more rapid treatment of such thromboses improves patient survival. “Time is muscle,” goes the operative mantra, and the shorter the delay, the better. Yet a study of nearly 100,000 patients published in 2013 in The New England Journal of Medicine found that shorter “door-to-balloon” times — the period from a patient’s hospital presentation to inflation of a balloon to restore coronary blood flow — did not improve in-hospital survival. The median door-to-balloon time dropped to 67 minutes, from 83, in the period studied, but short-term death rates did not change.

There are several plausible explanations for this result. Perhaps heart attack patients who are healthier and at low risk for death are already getting expeditious treatment, and those who are at higher risk are experiencing the most delays. Perhaps the follow-up time in the study was too short, and if we waited a bit longer, a survival benefit would be seen. Or perhaps there is another reason. Mortality after a heart attack has already dropped tenfold, from 30 percent to 3 percent, since Mason Sones invented coronary angiography in 1958. Can the tweaking or speeding up of existing procedures possibly yield any significant additional benefit?

There are other examples of such diminishing returns. In my specialty, heart failure, medications such as beta-blockers and ACE inhibitors have profoundly improved survival since their advent in the mid-1980s. Yet recent studies of newer agents — endothelin blockers, vasopressin antagonists — have shown little benefit. Today, patients’ risk factors, such as hypertension and high cholesterol, are better controlled.

It is getting harder to improve on existing successes. No doubt we should celebrate the rise of high-tech medicine. For example, more than 90 percent of patients who present directly to hospitals that do angioplasty have door-to-balloon times today of less than 90 minutes, with a median time of approximately 60 minutes, a major improvement from only a few years ago. However, this means that the bar is continually being set higher for every new treatment.

I believe that cardiovascular medicine in its current form, focusing on investigating minor iterations of commonly used drugs or add-on therapies or optimizing existing procedures, will increasingly produce only marginal advances in the years ahead. We will need to shift to a new paradigm, one focused on prevention — turning down the faucet rather than mopping up the floor — to continue to make the kind of progress to which patients and doctors have become accustomed. In this ­paradigm, psychosocial factors will need to be front and center in how we think about health problems. Despite the centuries-old association of the heart with emotions, this is still a domain that remains largely ­unexplored.

However, today it is increasingly clear that chronic diseases like hypertension, diabetes, and heart failure are inextricably linked to the state of our neighborhoods, jobs, families, and minds. Heart disease has psychological, social, and even political roots. To treat our hearts optimally will require interventions on all these fronts. This is much easier said than done, of course. Psychosocial “repair” is just as prone to unexpected consequences, difficult trade-offs, conflicting values, and diminishing returns as any medical treatment. We cannot even agree on what should be repaired. But we will have to find ways, as Peter Sterling, the neurobiologist, has put it, to “reduce the need for vigilance and to restore small satisfactions,” such as our contact with nature and with one another. For some, this will require city-planning initiatives to encourage walking or bicycling, for example, instead of more sedentary lifestyles. Others will require fortification in more social realms, such as the enhancement of public life. For still others, cardiovascular benefits will come from more individualistic pursuits, such as yoga and ­meditation.

Whatever the case, it is increasingly clear today that the biological heart is inextricably linked to its metaphorical counterpart. To treat our hearts, we must repair our societies and minds. We must look at not only our bodies but also ourselves.

Sandeep Jauhar, M.D., Ph.D., is the director of the Heart Failure Program at Long Island Jewish Medical Center. He is the author of Doctored and Intern and writes regularly for The New York Times.