This was the week that the quarantine got to me. Oh, I’m fine. But also: not fine!

But it is what it is, a phrase often used in regards to sports that I’ve always hated with a passion but that now seems apt. We do what we have to do right now, and we’ll see what happens next. It’s what that “next” is that’s making us all so itchy. Will things go back to normal or will we have to live in some sort of “new normal”? I pray for the former but suspect the latter.

A lot of people won’t be shaking hands anymore (and people who don’t wash their hands 20 times a day will be the odd ones), more people will be working from home, restaurants might be run differently, air travel won’t be the same, and maybe supermarkets will be a lot different from here on out. I don’t think we’ll have to follow the arrows one way down an aisle forever (side note to my fellow shoppers: Is it so hard to follow this rule right now?), but I wouldn’t be surprised if the cleaning procedures we’re seeing now are permanent in all stores and those plexiglass partitions at the register are a regular thing. If we got rid of salad bars and those wide-open bagel stations, it wouldn’t be a terrible loss.

What am I looking forward to most? Not hearing the word contactless every five minutes.

What are some of the changes you’ve seen happen since this whole thing started that you think should stick around even when everything is back to “normal”? Let me know in the comments.

How about stargazing? I don’t mean going to entertainment sites to find out what the cast of Friends is up to (that reunion is still coming!); I mean looking up at the night sky.

That’s turning out to be the perfect family activity right now. Not only is it cheap and something you can do together in your backyard — or maybe a short car trip away as long as you stay away from others — but because there’s less air and light pollution, the sky in many ways has never looked better.

When was the last time you printed out an email or a text and kept it?

The USPS has been going through some hard times the past several years (there are many reasons why and we could debate that), and COVID-19 hasn’t made it any easier. So there’s even more reason to want to save it. Will Leitch explains at NBC’s Think why the post office is still magic, and The New Yorker’s Casey Cep explains why we can’t afford to lose it.

I even like paying bills by mail. Getting an email saying something is due is so impersonal.

What has your quarantine diet been like? Mine hasn’t changed drastically, though I have discovered — or should I say rediscovered, since I’m sure I’ve had them before — that Hostess Cinnamon Coffee Cake is outrageously good. Other than that, lots of chicken and pasta and chocolate.

Could we even get through a quarantine without chocolate and other snacks? (Answer: no.) Frito-Lay knows this too, so they’ve started a web site, Snacks.com, to help you with all of your snack food needs. You can order 100 Frito-Lay products — including Cheetos, Lay’s chips, Smartfood, Rold Gold Pretzels, and Grandma’s Chocolate Chip Cookies — and they’ll deliver them straight to your door. PepsiCo, the parent company of Frito-Lay, also has PantryShop.com, where you can have “pantry kits” delivered. The kits can be a mix of snack foods, beverages, even breakfast foods.

Isn’t Snacks.com a great domain name? The company has had it for years and worked to get the site up and running in 30 days.

As a bald man who owns his own trimming kit, I’m not having a problem with an out-of-control mane. I know it’s a problem with others, though. Women are posting selfies of what their hair looks like after weeks of not being able to go to a salon, and men are growing “quarantine beards.” (If you see me and I have a beard, it’s not a quarantine beard; I just haven’t shaved.)

If you need a haircut, this might finally be the time to learn how to cut your own hair. Maybe you can even go retro and get a Flowbee. It’s making a comeback.

Little Richard — real name Richard Penniman — always said that he invented rock ’n’ roll, and there’s a good argument to made that he did. The incredible piano player and showman stormed into the ’50s scene with such songs as “Tutti Frutti,” “Long Tall Sally,” “The Girl Can’t Help It,” and “Good Golly Miss Molly.” He also appeared in several movies and later became a preacher. He died Saturday at the age of 87.

Jerry Stiller was probably best known as Frank Costanza, George’s not-quite-all-there father on Seinfeld, but he had a long career on TV and in film. He was one half of the comedy team Stiller and Meara and appeared in such movies as Hairspray, Airport 1975, and the terrific The Taking of Pelham One Two Three. He was also a regular on the CBS sitcom The King of Queens. He died Monday at the age of 92.

Roy Horn was half of the famous illusionist team of Siegfried & Roy. Horn was severely injured by one of his tigers, Mantacore, during a 2003 Las Vegas show. He died last week at the age of 75.

Barry Farber was an influential radio staple since 1960, hosting talk shows on WINS, WOR, WMCA, the ABC Radio Network, and other outlets. He also later ran for both mayor of New York City and Congress, became a TV host, and opened his own restaurant. He died last week at the age of 90.

Florian Schneider was the cofounder of the German experimental tech rock band Kraftwerk. He died last month at the age of 73.

Martin Pasko was a prolific, award-winning writer of such comics as Superman and Wonder Woman, and of TV shows like Batman: The Animated Series, Max Headroom, Buck Rogers in the 25th Century, Teenage Ninja Mutant Turtles, and the ’80s reboot of The Twilight Zone. He died Sunday at the age of 65.

Mary Pratt was a pitcher for the Rockford Peaches, one of the teams of the All-American Girls Professional Baseball League, an inspiration for the film A League of Their Own. She was the last living member of the original 1943 team. She died last week at the age of 101.

Yes, he wrote The Wonderful Wizard of Oz and its sequels, but he also wrote such books as The Life and Adventures of Santa Claus, The Twinkle Tales, The Fate of a Crown, and Policeman Bluejay, many under various pseudonyms. 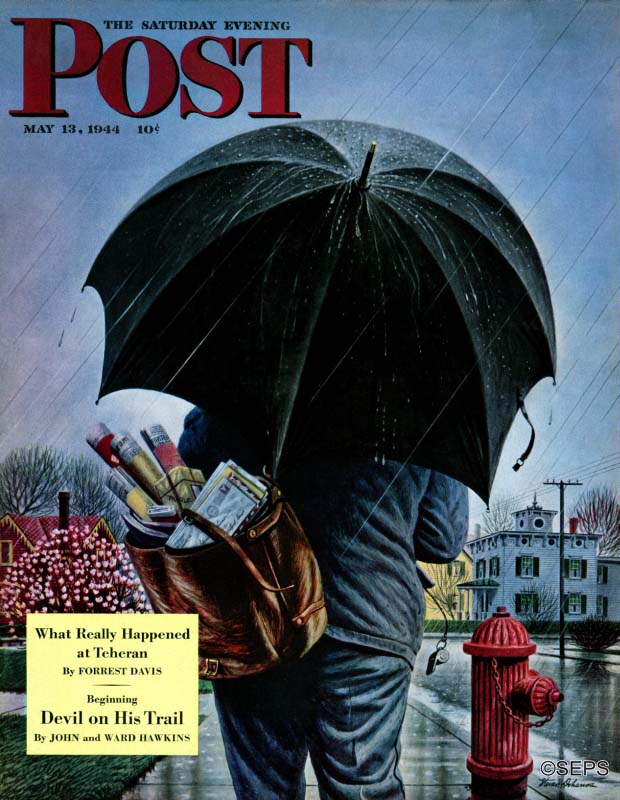 I chose this Stevan Dohanos cover for obvious reasons.

That old jingle has been going through my head a lot this week. Was that just a New England commercial? It drove into our heads that brown eggs are better than white because they were from local farms. I don’t know if that’s true or not but, hey, May is National Egg Month.

Here’s a recipe from Bobby Flay for Eggs Benedict (the secret is to put vinegar in the water). Here’s a recipe from Curtis Stone for Herbed Deviled Eggs, and here’s one from Stone for Scrambled Eggs with Smoked Salmon and Chives. If you’re just in the mood for a sandwich, Allrecipes has a recipe for Delicious Egg Salad. I don’t think the delicious in the title is necessary since I’m going to assume that’s the plan for all recipes at Allrecipes.

By the way, you might be boiling your eggs incorrectly. It’s one of those “easy” things that’s easy to mess up. Here’s a video tutorial from Simply Recipes.

This is the 70th anniversary of the day that celebrates each branch of the military.

This day was originally a celebration of Queen Victoria’s birthday and is now celebrated as the birthday of the Queen of Canada.