Can you believe it’s almost July? Time flies when you’re having … fun?

Some social distancing notes from this past week:

It’s official: Baseball is back. Teams will report to “spring” training next week and will play a 60-game season.

The October New York City Marathon has been canceled. It was to be the 50th anniversary of the race. It will now take place in October 2021.

Several pro tennis players — including Novak Djokovic and Grigor Dimitrov — tested positive for COVID-19, thanks to taking part in the really ill-advised Adria Tour. We’ll have to see how this news affects the rest of summer tennis, including the U.S. Open in August.

The Iowa State Fair has been canceled, along with Oktoberfest in Munich, the White House Correspondents’ Dinner, and even Costco sheet cakes. No cruises for a while either.

The Barcelona Opera reopened this week. They couldn’t have humans in the audience, so they had plants.

Speaking of plants, we don’t know what things will be like this holiday season, but rest assured, there will be a Rockefeller Christmas tree!

As if we don’t already have enough to deal with, now comes word that a Saharan dust plume — a massive cloud of dust that darkens the skies and may even make you cough — is traveling thousands of miles from Africa and should hit the United States right around the time you’re reading this, maybe even sooner.

The Number One Movie in America

What do you do if you directed a movie but a pandemic has closed all of the movie theaters? You can do what Christian Nilsson did, something that made sure his short film was the number one movie in America.

Those of you who had Michael Keaton in your “Who Will Play Batman Again?” office pool, congratulations! Looks like he’s going to don the suit again for several DC movies, starting with The Flash.

But what about Robert Pattinson, who will play the role in the upcoming The Batman? That movie will probably be separate from the other DC movies, but because The Flash involves time travel and a multiverse and things like that, they could actually exist in the same superhero world. I’m sure it will be confusing but profitable.

I know I’ve talked about both of these things several times in this column, but I have a love for them and I’ve been thinking a lot about them during this pandemic.

I’m a big letter-writer, not just because I like the form but also because I don’t want to live in a world that’s just text messages and Facebook posts. Pen pals are good medicine, and no one is going to save a text message or social media Like. I need that connection to the past, and writing something out longhand actually makes me slow down and think. I’d also like to save the post office.

I also love reading the letters of famous writers, and Dwight Garner has a great piece in the New York Times about that very subject. In addition to his picks, I’d also suggest The Selected Letters of Raymond Chandler and Letters of E.B. White.

I don’t know what you’ve been doing the past few months while many of us are staying home a lot more than usual, but writing letters to friends and family again — real letters, written by hand or on a typewriter, with an envelope and a stamp and everything! — are a terrific way to pass the time and connect with those you love in a way you haven’t done in many years. Or ever, if you’re younger. And don’t tell anyone you’re doing it. Imagine the smile on their face when they go to their mailbox and pull out a letter from a friend.

And can we talk a bit about landline phones? Yes, I know we all have supercomputers in our pockets that can do so many incredible things and have us on call 24/7 (there’s no hiding from anyone anymore), but there are reasons to hold on to your landline phone, as Nicholas Gilmore has pointed out. They’re more reliable, they sound better, they’re more secure, they don’t have to be charged, and it’s a lot more satisfying to slam a landline phone down when you’re good and mad than to click a wimpy button. Even more satisfying if it’s a rotary phone.

I do fear that one day the phone companies will make it so we can’t even use landline phones anymore. The technology will move forward and everything will be smartphone or web-based. But until that day, to paraphrase Charlton Heston, they can have my landline when they pry it from my cold, dead hands.

CBS’s Steve Hartman is doing some wonderful things with his On the Road segments, stories that no one else covers (he’s one of the best storytellers on television), and that includes this piece about the mysterious mailbox that someone placed in the Vermont woods.

Ian Holm had a lot of great roles in a lot of great movies over his long career, including Chariots of Fire (for which he received an Oscar nomination), Aliens, Brazil, Big Night, and four Lord of the Rings movies. He was also an acclaimed stage actor. He died last week at the age of 88.

Joel Schumacher directed such films as The Lost Boys, Batman and Robin, Batman Forever, The Client, St. Elmo’s Fire, and A Time to Kill, along with several music videos and shorts. He died Monday at the age of 80.

William Hale directed dozens of TV shows over the years, including The Invaders, The Time Tunnel, Lancer, Night Gallery, The Streets of San Francisco, and The F.B.I. He died last week at the age of 88.

Lewis John Carlino wrote and directed The Great Santini and wrote the screenplays for I Never Promised You a Rose Garden, Seconds, The Mechanic, The Sailor Who Fell from Grace with the Sea, and Class, along with various TV shows. He died last week at the age of 88.

Elyse Weinberg was a singer-songwriter whose 1968 folk-rock album Elyse went largely unnoticed until another musician/producer found it in a record store and decided to contact Weinberg and re-release it. Another old album of hers was later released, as well as a new album in 2009. She died in February at the age of 74.

Murphy was one of the most decorated soldiers of World War II (you can read a list of his medals here) and went on to become an actor and songwriter. He died in a plane crash in 1971.

The movie, based on the Peter Benchley novel, pretty much invented the summer blockbuster — for better or worse — and made millions of people not want to go swimming ever again. 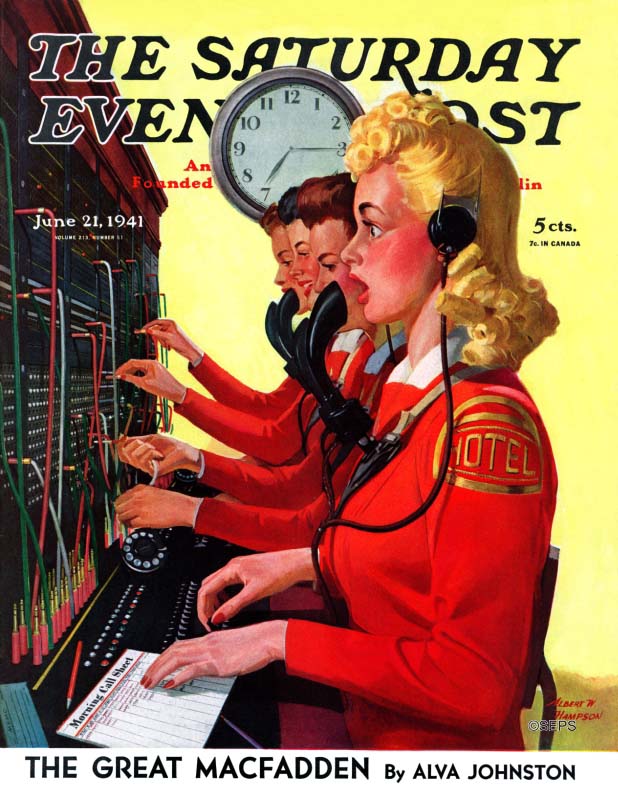 I miss switchboard operators like this. I miss talking to the operator on the phone period. I miss busy signals too.

Since I’ve talked about switchboard operators and letter-writing and typewriters, I thought the recipes this week should also have a retro feel.

From Mid-Century Menu — an incredibly fun recipe site — comes this recipe for Lima Beans and Marshmallows from 1935 (it’s better than it sounds), this one for a 1956 Franko Snack, and this one for Carrot Bread from 1967. Another one of my favorite sites is the terrific Dinner Is Served 1972, which has recipes for Stuffed Ham Sandwiches, Calico Stuffed Peppers, and Crunchy Baked Chicken. And for dessert, Vintage Recipe Cards has this recipe for Chocolate “Brownie” Dessert. Brownie is in quotes because it’s a Weight Watchers recipe from the ’70s and they probably only have a passing resemblance to what you and I call brownies.

Please note that the recipe also calls for red and green food coloring, which are never used for some reason.

Today’s the day to celebrate the men and women who work under a famous creed: “Neither snow nor rain nor heat nor gloom of night stays these couriers from the swift completion of their appointed rounds.” But that’s not an official creed, just an informal one.

It was originally called Dominion Day and it celebrates the anniversary of the Constitution Act, which combined the Province of Canada, New Brunswick, and Nova Scotia.