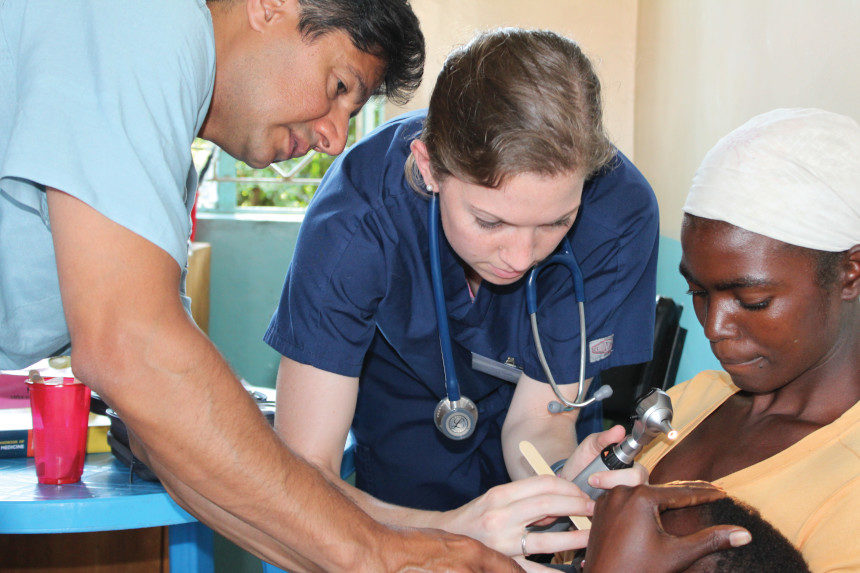 Training station: Dr. Desai and a med student treat a young patient in Kenya. “I liked the idea of giving patients skills to help themselves,” he says. (Courtesy Gautam Desai)

At a bustling primary care clinic in rural Guatemala, Gautam Desai speaks with a mother and her daughters. The girls, ages 2 and 4, are two of nearly 300 patients that Desai and his volunteer team will examine in an auditorium turned makeshift medical center in the mountain town of San Juan Alotenango. Desai’s team includes 11 doctors and 39 med students from Kansas City University, where he’s a physician and family medicine professor, and the room in the town’s municipal building buzzes with a noisy collision of conversations, crying babies, and rambunctious kids.

Desai speaks calmly above the clatter. His two young patients have colds, so he prescribes nasal spray, vitamins, and Tylenol. Such common remedies may seem unremarkable, but for many rural residents in developing countries like Guatemala, Tylenol is a big deal. Nasal spray is a big deal. Anything you might buy at your local drug store is a big deal, from sunscreen to reading glasses. In fact, the team hands out around 100 pairs of reading glasses a day during this two-week annual trip, and it can be a life-changing moment, particularly for tradespeople such as weavers who hand-sew huipils, the colorful, patterned garments worn by many Guatemalan women.

Desai has made these simple yet significant gestures to patients in multiple countries. Over the past 20 years, his teams have treated roughly 40,000 people, not just in Guatemala, but through twice-a-year clinics in Kenya and a once-a-year clinic in the Dominican Republic. Here in Guatemala, his American students and professionals see up to 400 patients a day with conditions ranging from arthritis to rashes.

Despite his compassion and his passion for healing the sick, the modest, mellow Desai, who looks like David Duchovny in scrubs, initially resisted a career in medicine. He had seen the long hours worked by his father, aunt, and multiple family members, all of whom were physicians.

“My dad would never take a vacation,” says Desai, who was born in India but moved to Michigan with his family at age 5. “We’d have to force him to come to graduations and stuff like that.” Determined to enjoy life, Desai traded his pre-med studies at Boston University for a degree in psychology. He was contemplating a career in real estate when his brother, also a physician, encouraged him to consider osteopathic medicine. Desai was intrigued by this more holistic approach to healthcare that focuses not simply on treating symptoms but understanding how patients’ lifestyles and environment affect wellness.

After earning his medical degree from Michigan State, he joined KCU in 2000. When a dean learned that he spoke Spanish, he was invited on a KCU trip to Guatemala. Soon he was leading the trips, which are supported by DOCARE International, a nonprofit focused on healthcare in under-­resourced communities. For a man who was once worried about working too many hours, leading trips in three countries — while also seeing patients and supervising residents at KCU’s Family Medicine Residency Program — is a heavy load.

“He’s working on these trips year-round,” says volunteer Sarah King, a med student who graduated in May 2020. “There’s so much organization that goes into it. But he does a good job delegating to students to get us involved. He has fostered community and camaraderie.”

Students work hard. Each morning, they lug supplies from their hotel in the Spanish colonial city of Antigua and load large cases onto buses for a roughly three-hour round-trip drive. The clinics are held in a different town each day. Students talk to patients, obtain their history, and conduct a physical exam. A physician or physician’s assistant then meets the patient and reviews the findings. Together, they develop a treatment plan.

The students are well supervised — “We’re not like, ‘Hey, go take that appendix out,’” Desai jokes — and they obtain invaluable hands-on experience in unique circumstances. One student talked excitedly on the bus ride back to Antigua about using a portable ultrasound to examine a large ovarian mass. Students also improve their Spanish and help people who often have never seen a doctor. Those opportunities are a big reason why med students attend KCU, Desai notes. Working abroad will not only make them better doctors, many students say, but it has encouraged them to work in underserved communities at home.

“I think working abroad re-centers us on why we’re passionate about medicine, and with the lack of resources here, it makes us use our brains in a different way,” says Yana Klein, a fourth-year medical student and one of the trip’s student leaders.

Another benefit: Students are exposed to a level of poverty unlike anything they’ve seen in the U.S. The encounters make them more empathetic. Klein mentions her interaction with a 96-year-old widow who arrived at a clinic with age-related ailments. “I offered a little bit of help with her pain,” says Klein, but just as important to the patient was the human contact. “We talked about her anxiety and sadness. It didn’t seem like much, but she started crying because she was so grateful. Just giving someone a little bit of time and kindness can go a long way.”

That emphasis on empathy, Desai believes, will remain with students as they pursue their medical careers. And he has experienced locals’ gratitude as well. For each of his annual visits to Guatemala, Desai spends about $30 for 30 baby chicks, paid for by KCU staff who contribute to his “chicken fund.” The volunteer team provides two chicks to various local patients who farm or know how to raise them. The chicks will grow to be egg-laying chickens, providing families with eggs, which provide both a nutritional boost and a reduction in food costs (some families also sell the eggs).

Desai’s natural humility makes him cautious about basking in the adulation of patients, but still, it feels good to be appreciated. “Sometimes we go back to a village and someone recognizes us and says, ‘Hey, I’m following your advice,’” he says. “Those moments make me happy.”

Featured image: Training station: Dr. Desai and a med student treat a young patient in Kenya. “I liked the idea of giving patients skills to help themselves,” he says. (Courtesy Gautam Desai)