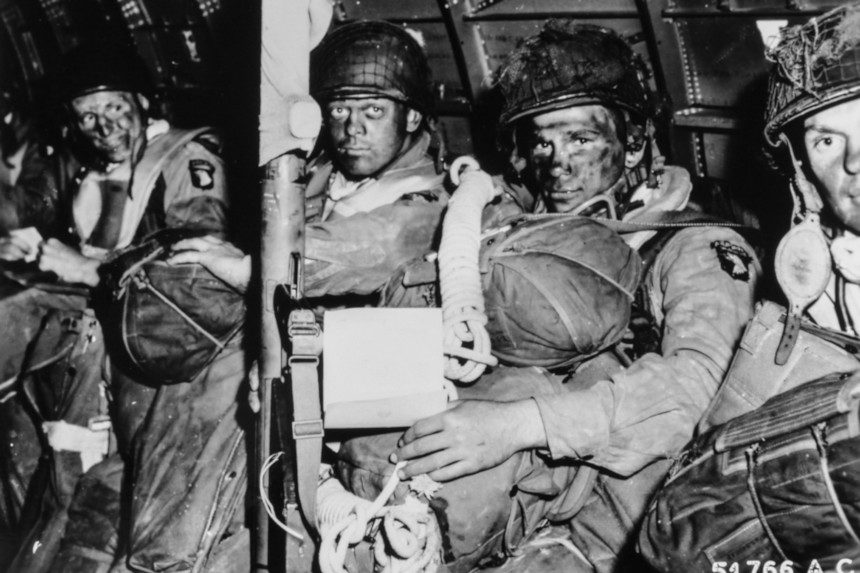 —This article originally appeared in our January 21, 1956, issue. General Matthew Ridgway recounts the paratrooper invasion by the 82nd Airborne Division during the nighttime hours of June 5, 1944: The day before D-Day.

A buzzer buzzed, the green light flashed. Back in the plane, Captain Schouvaloff, a Russian-language officer with a devil-may-care wit about him, stood up. In his hand he held the hook of his static line — the lifeline of the paratrooper that jerks his chute open as he clears the plane. “Pray tell me,” said Schouvaloff, “what does one do with this strange device?”

From the tense nerve-straining men there came a burst of laughter. With this laughter ringing in my ears, I dived out the door toward the ground 600 feet below.

The battle for Normandy had begun, and I was falling fast into the midst of it. Above me and to the right, the chutes of the men who had followed me out of the plane showed dimly against the moon. I came down straight, into a nice soft grassy field, rolled, spilled the air from my chute, slid out of my harness, and looked around.

Dark shapes were moving nearby. I grabbed for my pistol. It was gone, and as I stooped to grope for it in the grass, I caught the bulky outline of a cow. I have never been so pleased to see a cow. Her presence meant that this field was not mined or spiked with “Rommel’s asparagus” — sharp wooden stakes that could impale a paratrooper or rip the bellies out of the gliders that were to come in at first daylight.

All through the night, the troopers came in, by twos and threes. They came in slowly. The unexpected clouds my formation had struck as we neared the drop zone had scattered the other elements of the division widely.

Later we learned that the Germans were broadcasting to the world that the 82nd had been annihilated. The truth was that within the next few days the 82nd annihilated the German 91st Division.

Featured image: Sky warriors: The resolute faces of paratroopers as they prepare for their initial nighttime assault. (U.S. Army)