In 1976, the Jell-O company debuted its pistachio pudding mix. It was the ’70s, so one of the first things that people did was turn it into a “salad” — the word here meaning, of course, a combination of pudding, Cool Whip, pineapple, and nuts. (Maraschino cherry optional but encouraged.) General Foods, which owned Jell-O, published a recipe for what would later become “Watergate Salad.” They initially called it “Pistachio Pineapple Delight.” The Watergate scandal was a year in the past, but in a time before internet news, it was still as fresh in people’s minds as pudding powder in a factory-sealed packet. Somebody came up with the name, and as these things do, it caught on. (It has also been claimed that the name originated with a chef at the Watergate Hotel, who non-scandalously served a form of the salad to guests. But that’s just not as fun a story, is it?)

The thing about Watergate Salad, however its moniker developed: it’s a combination of pudding, canned fruit, and imitation whipped cream. For the modern palate, there are more enjoyable ways to consume pistachio pudding. Enter: Watergate Cake.

This recipe, adapted from Vintage Cakes by Julie Richardson, uses homemade pistachio pudding instead of the boxed kind. It’s a little more effort, but the flavor is much more “real,” and the rich texture is worth the work.

Finely grind pistachios and ⅓ c sugar in food processor. Transfer to saucepan. Add milk to pistachio-sugar mixture and warm over low heat until hot (don’t let it boil). In a separate bowl, whisk the egg yolks, remaining sugar, salt, and cornstarch. Slowly pour ⅓ of the pistachio mixture into the egg mixture, whisking all the while. Pour back into saucepan with the remaining milk mixture and whisk over medium-low heat until it begins to bubble. Whisk and heat for about one minute after the bubbling starts, until thick. Pour into a mesh sieve and strain through. Cover and chill 1 hour.

Preheat oven to 350°. Prepare 2 8-inch cake pans by buttering and flouring the bottom and sides. Place an 8-inch circle of parchment paper in the bottom of each. In a medium bowl, sift and mix flour and baking powder. Set aside. Blend butter and sugar until fluffy using a stand or handheld electric mixer set to medium-high. Add oil and vanilla extract and mix well. Add eggs one at a time. Lower mixer speed to medium-low. Alternate adding flour mixture and milk until both are incorporated. Do not overmix! Measure 1 cup of prepared pistachio pudding and stir in by hand. Pour batter into pans and bake until done, about 30 minutes. Remove from oven and let cool.

Whip cream with stand mixer on medium. Stop before peaks form. Add mascarpone, sugar, and vanilla. (If you want a brighter color, add a couple drops of green food coloring at this stage.) Increase mixer speed to high and whip just until peaks are firm. Fold in ½ c prepared pistachio pudding, then another ½ c. 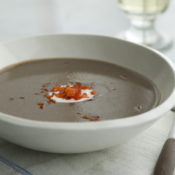