In the 1920s flapper era of parties and glamour, no Saturday Evening Post artist covered the period of graceful elegance like Ellen Bernard Thompson Pyle. Born in Germantown, Pennsylvania, on November 11, 1876, Pyle had a slow-building rise to fame that spanned many decades between her art studies and her working years as an artist.

Pyle began her studies at Drexel Institute (now Drexel University) in 1895. While there, she studied under Lydia Austin and Charles Graffy. She was at the top of her class, earning a spot in Howard Pyle’s summer art school at his studio in Chadds Ford, Pennsylvania, in 1898 and 1899. It was at Howard Pyle’s summer school that she joined a group of prodigy illustrators including N.C. Wyeth, and met her future husband Walter Pyle, who was helping his brother Howard.

The story of her relationship with Walter was complicated, and ruled over much of her time away from her lifelong passion creating art. Though the two met at Walter’s brother’s summer art school, it was years before they would reconnect. Walter was 17 years Ellen’s senior. At the time the two met, Walter was also married to another woman.

Having finished her formal education, Ellen moved home to live with her parents and was working as an illustrator from her makeshift home studio by 1901.

In 1903, Walter’s first wife died. Six months later, he called upon Ellen. Within the year, the two were married and they moved to Wilmington, Delaware. Ellen took time away from art to raise her growing family. Madly in love, they had three children: son Walter Pyle, Jr. (1906) and three daughters, Ellen (1907), Katie (1911), and Caroline (1914).

Walter was a wealthy businessman who owned a feather factory in the northeast. In 1918, the family moved to their newly purchased 40-acre farm, Westbrae, in Greenville, Delaware. Walter suddenly died of Bright’s Disease a year later in 1919 at the young age of 42.

Ellen, then widowed, returned to working as an artist in order to provide for her three children. Walter’s sister Katherine sent three of Ellen’s illustrations to The Saturday Evening Post in 1922, two of which were immediately selected by the Post’s famous editor, George Horace Lorimer.

Over the course of the next decade and a half, Pyle completed forty covers for The Saturday Evening Post, illustrations for Parents’ Magazine, Literary Digest, Pictorial Review, and Everybody’s Magazine, and 10 dust jackets for books by author Berta Ruck. Ellen Bernard Thompson Pyle died of a heart condition on August 1, 1936, at the peak of her career as a working artist.

Today, many of her illustrations remain housed in private collections including those built by her living relatives. In 2006, an original Saturday Evening Post illustration was rediscovered through the television series Antiques Roadshow, where the work was appraised with a value between $25,000-$30,000. In 2009, her great-grandchildren organized a “career retrospective” show at the Delaware Art Museum. 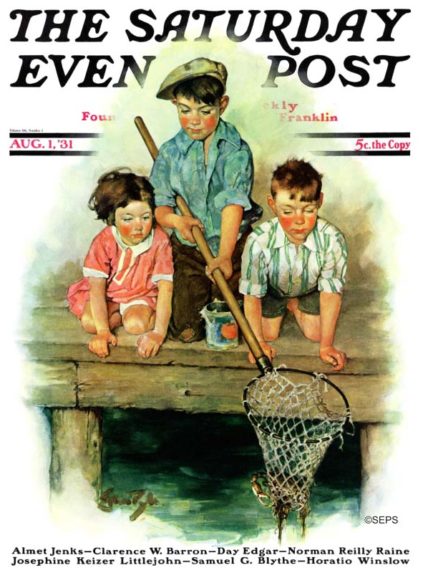 Maryland
The Chesapeake Bay makes a great location for crabbing, with more than 7,000 miles of shoreline and plenty of piers to dip your net. Any good Marylander knows what to do with that fat crab, but these kids don’t look so sure.