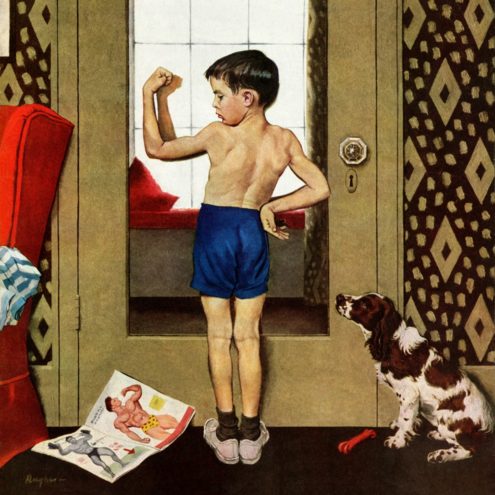 Born in New York City in 1907, George Hughes grew up in the epicenter of twentieth century art and advertising.  He stayed in the city until adulthood, skipping college to attend the National Academy of Design and the Art Students’ League in the city.

After having finished his education, he provided freelance illustrations to the fashion industry including works for Vanity Fair and House and Garden.  In 1936, the automotive industry drew him away from New York to Detroit.  He worked in a stable job, contracted as a special designer, a Mechanical Designer for car companies.  He disliked the industry, and shortly thereafter moved back to New York City.

Upon returning to the city, he had a short-lived first marriage and joined the Charles E. Cooper Studio.  He created art and copy for the firm, and was eventually picked up as a talent for representation by American Artists.  He quickly remarried.  This time, love lasted a lifetime.  He married a woman named Casey, and the two had a total of five daughters.

In 1942, Hughes caught the eye of Saturday Evening Post Art Director, Ken Stuart.  Hughes had created a simple illustration for an interior fiction piece in the magazine.  Stuart then commissioned Hughes for a series of WWII portraits of American generals titled “These Are the Generals.”  This collection brought Hughes early national fame, and the Post kept tabs on his developing work for later possible covers.

With a growing family, Hughes and his wife decided they needed more living space.  It was time to leave New York’s urban sprawl.  George knew that Arlington, Vermont was growing in popularity among American artists.  The Schaeffers, the Rockwells, and the Athertons were all family friends who lived there.  In 1946, George and Casey bought a small farm near the other artists.

Their apparent reasons for purchase included the scenery and good business. The Hughes’s wanted to cultivate an air of artistic sophistication, forcing themselves into the popular artist group.  Their plan paid off as Hughes soon became a recurring Post cover artist.

Hughes once remarked that he enjoyed sailing in summer, duck hunts in the fall, and skiing in winter.  Arlington, Vermont turned out to be the perfect place to build his life.  The Hughes’s developed lasting friendships as well.  George often ran into Norman Rockwell in downtown Arlington.  Rockwell would ask George’s opinion on his sketch ideas, but constantly painted the opposite of George’s advice in his final draft.  The situation became a running joke between the two artists.

George Hughes’s first Saturday Evening Post cover was on the April 17th, 1948 issue.  From that point on, Hughes had a successful career in the art world.  He completed a total of 115 Post covers, along with illustrations for McCall’s, Woman’s Day, American Magazine, Reader’s Digest, Good Housekeeping, and many more.

Hughes, more than any other Post artist except Rockwell, survived the rise of photography.  His last Post cover was July 14th, 1962 until he completed one more for the magazine revival in 1971.  In the 1970s, he switched professions in the art world to become a successful portrait artist.  He lived a full life, and died in 1990.  During his lifetime, Hughes had seen his work on display in the Detroit Museum, the Pennsylvania Academy of Fine Art, and the Art Institute of Chicago. Nevada
The setting of this depressing encounter is not fifty miles from nowhere. This is nowhere. Artist George Hughes pieced together the landscape from some of the more desolate terrain of the Southwest, where the skies are not cloudy all day and where seldom is heard a discouraging word. Both pedestrians on our cover have, however, been subjected to some rather discouraging words: Exactly 2.6 miles in either direction is a fuelless automobile, and in each automobile sits a wife who was ignored earlier in the day when she suggested, “Don’t you think we’d better stop? The sign at that station says, Last Gas for 40 Miles.” And you should have heard the discouraging mutterings when these chastised males discovered that their spare-gas cans were drier than a sun-baked skull.

View Artwork Out of Gas New Jersey
True, these poor fellows on Mr. Hughes’ boardwalk are heart-rending, also 5,000 souls sardined into nearby cottages, but as oceans are useless without water, can’t everybody resolve to observe this as Be Kind to Rain Week?

View Artwork Rain on the Boardwalk