John Falter was a born and raised Midwestern illustrator, originally from Nebraska. Born in 1910 in Plattsmouth, Falter moved to Falls City in 1916 for his father’s job.  From an early age, Falter found art and illustration attractive.

Even as a young man, the artist marketed his skills, creating a comic strip called “Down Thru the Ages” for the Falls City Journal.  The Journal’s cartoonist, “Ding” Darling, happened to be a Pulitzer Prize-winning artist who encouraged Falter in his illustrative work. 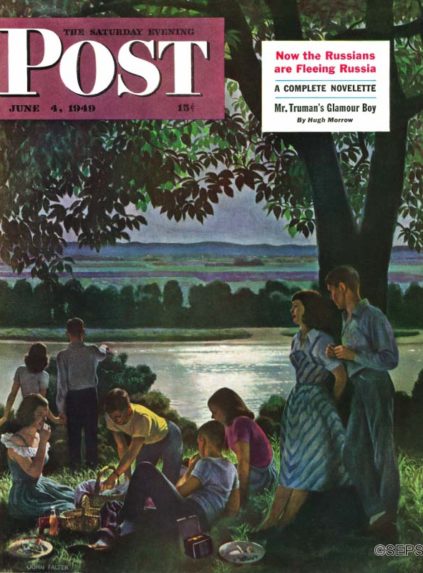 California
On the long fishing pier at Santa Monica, California, tourists from all over the United States stand packed together like sardines while they try to catch fish. Many of the fishermen go through their routine calmly and expertly; occasionally a greenhorn flies into a tizzy, yelps for the landing net and hauls in a dwarf flounder or something else depressing. Artist John Falter was non-committal about whether he caught anything—besides a Post cover. Delaware
New Castle, on the busy Delaware River, is six miles south of the state’s largest city, Wilmington, and two miles off the main highway. Once it was Delaware’s capital. Founded in 1651, it was William Penn’s landing place when he came to America in 1682. Penn is thought to have spent a night in the house at the extreme right of our cover. The spire atop the Court House (left foreground) was used as the center of a twelve-mile radius in part of the 1763-67 survey—to settle a boundary dispute—that resulted in the Mason-Dixon Line, which later played a key part in United States history.