Newell Convers Wyeth (1882-1945) was born in Needham, Massachusetts. Wyeth was invited to join Howard Pyle’s Brandywine School of art in 1902, and quickly connected with Pyle’s style.

His first commissioned illustration was a bucking bronco for The Saturday Evening Post in 1903. A year later the magazine commissioned him to illustrate a western story, so he went west and worked as a cowboy in Colorado and visited the Navajo in Arizona. At one point his money was stolen so he worked as a mail carrier to make enough money to get back home.

Wyeth went on a series of trips out to the west, gathering artifacts and immersing himself in the wild west and Native American cultures. Eventually he started illustrating classic literature. He illustrated editions of Robin Hood, Rip van Winkle, and The Yearling. His greatest success was considered to be his illustrations for Treasure Island by Robert Louis Stevenson.
Wyeth also created advertisements for clients like Lucky Strike and Coca-Cola.

In 1945 Wyeth received an honorary Master of Arts degree from Bowdoin College.

Wyeth is the father of noted painter Andrew Wyeth. View Artwork Child on a Donkey 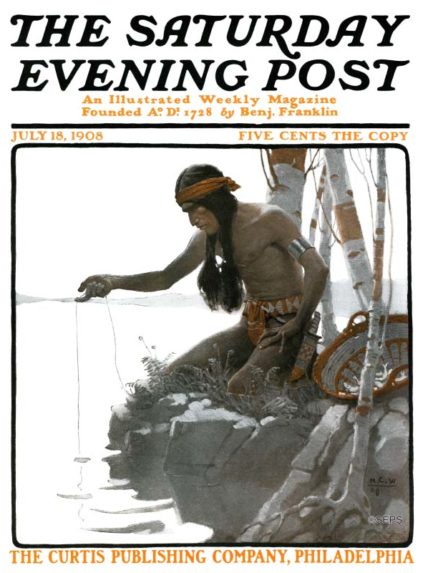