"I do art work for people. I feel like I have to be relating to somebody. That's important to me to be able to be of use, of value."
-Thorton Utz

A southerner, Thornton Robyn Utz was born in Memphis, Tennessee in 1914 where his father worked as a craftsman in horse-drawn carriage trimming until he moved over to automobile upholstery. From a very young age, Thornton Utz began drawing and illustrating without any professional training. He made his own comic strips to pass out to schoolmates. By high school, Utz had received encouragement from his teachers to pursue a career in the arts. His passion for art and illustration would build into a defining style that heavily influenced advertising and illustrating throughout the 1950s and 1960s.

Utz’s work was so popular he received steady work before even having graduated from Memphis Technical. Utz was quick to make friends throughout his life. At Memphis Technical, he met a young man by the name of Euclid Shook, who became his artistic partner for several years. The two worked semi-professionally on advertisements and boards for fairs and carnivals across the state. They graduated from high school in 1933 and together enrolled in The Academy of Art in Chicago.

While studying art in Chicago, Utz shopped his skills around various advertising firms and print shops looking for work. His time in Chicago helped form his defining illustrative style. Looking back, Utz believed the time was wasted, saying, “I don’t think I learned much that year- except that I would never learn art in art school.” Much to the artist’s own chagrin, his style developed most in Chicago because of his schooling and the influence of his relationships. The most important artistic relationships he developed were those of Coby Whitmore and Ben Stahl. They all later became prominent members of The Chicago Gang of illustrators, friends who worked together to build a synonymous style for illustration. In Chicago, Utz met his wife, Louise Prohaska, through Ben Stahl. The two fell in love with one another over the course of a long period, eventually marrying on March 6th, 1940.

Utz received his first major illustration contracts designing color page art for Bell Aircobra, leading to his discovery by The Saturday Evening Post for an illustration and agent signing in 1944. Utz quickly settled his family just outside of New York City in Westport, Connecticut where he could work for large publications and advertising firms from home while helping to raise two daughters and a son. Utz was fascinated by the Americana style and often chose to depict suburban families living their every day lives. Some of his favorite artistic choices involved objects of technology and movement such as buses, trains, and cars. The idea of mass transportation and its commentary on the speed of the times fascinated the southern boy whose father had to shift from working on horse carriages to automobiles.

By the 1950s, Thornton Utz was using the interactions in his life to reach out to the rest of the country through art. His illustrations of American families going to work, cooking, cleaning, mowing the yard, and completing other chores made for a strong connection to the sensibilities of the time. His potrayals of the successes and humors of American stereotypes resonated with the country’s citizens in the post-war boom economy. His work made him one of the most popular illustrators in post-war America, fetching commissions for forty-five Saturday Evening Post covers during the decade.

In the mid-1960s, Utz’s wife Louise fell ill and the artist took time off from his work to take care of her at the house. The family moved to Sarasota, Florida for her health where Utz was able to return to his work as an artist. He founded a cartography business designing maps. He eventually remarried and had more children. He sold his business and became a successful portrait artist, completing works for President Jimmy Carter, his wife, Rosalyn, and his daughter, Amy, and even commissions for the Princess of Monaco. Utz lived a full life as an artist with a successful career spanning many areas of the industry. He died in the year 2000. 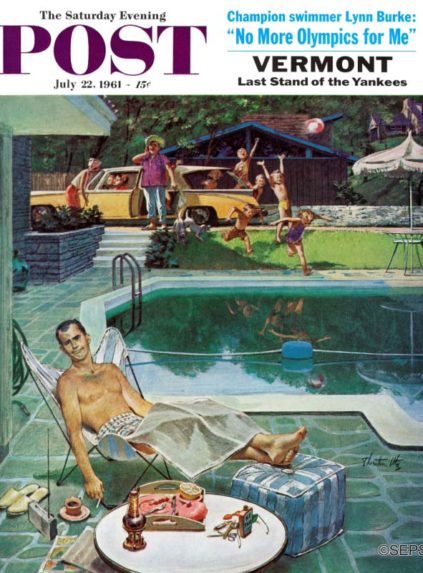