Letters to the editor ran the gamut.

“…[Y]ou have reduced your magazine to one which any decent American would rather be without or hide because of the obscene picture on the cover.” Don’t laugh. I receive and distribute enough “Letters to the Editor” to know there would be very similar comments today. Of course, if this is “obscene,” centuries of great masters should be ashamed of themselves.

But an overwhelming number of 1955 readers were pleased. “What did you expect a mermaid to wear? A sweatshirt?” wrote a Michigan reader. A letter from Alabama asked, “What bait is best?”

The original painting is in the collection of Director Steven Spielberg, an avid Rockwell collector. It’s 1959 and the news is grim. Krushchev is threatening to use atomic weapons; inflation and job woes dominate the news, and, according to the old newspaper, thugs beat two men set to testify against union pickets. It’s an ugly world out there. Our young graduate looks appropriately wary as he sets off to solve all these problems.

As seen in the photo above, Rockwell created a life-sized painting of the soon-to-be-cover. Post editors couldn’t resist asking Norman if he ever fell from his stool while painting the graduate, making no attempt to squelch images of the artist face-down in his palette. Editors were like that because a) America’s favorite artist falling on his noggin would make a great story, and b) they just enjoyed giving Norman a hard time. To paint the lower portion, Rockwell came down and sat in his regular chair. Post editors had provided the background newspaper, saving the artist some detail work, so he claimed he was making sure the Post got its money’s worth in square feet. The great Norman Rockwell was not above dishing it back. Rockwell and baseball—what could be more American? In the 1957 Red Sox locker room, a rookie shows up at spring training (hint: this must be spring training, since the palm trees in the window clearly rule out Boston!). Playing the part of the rookie was local baseball star Sherman Stanford. Real Red Soxers filled out the scene: Lower left was Sammy White, and the other two players sitting were Frank Sullivan and Jackie Jenson. Behind the rookie, Billy Goodman is wiping away the smile. These gracious gents visited Rockwell to pose, meeting the neighbors while they were there, making the artist even more of a hero to the townsfolk.

The shirtless guy to the left was referred to by Rockwell as “John J. Anonymous,” who once tried out for the Red Sox. He was thrilled when “manager” Rockwell put him in the line-up. Ted Williams stands in the middle, which was a good trick, since he couldn’t make it to the studio. The artist used a stand-in and consulted his baseball card collection to get Williams’ profile. He always knew that bubble gum would come in handy. Birds and bees are okay, and I understand about Fluffy and her kittens, but this other stuff is revolting.

Dad has to be given credit for attempting to explain that although mothers and fathers sometimes feel like throttling each other, they really are in love and children come along. Then they work hard to keep food on the table and the mortgage paid for those offspring who sometimes annoy and worry their parents to distraction. But all in all, brave Dad concludes, life is a pretty darn good invention.

Junior has his own conclusion: this is just Too Much Information. Wooden gym floors and cheering on the team—memories are made of this. But not all the memories are joyous. The other team got lucky with a last-second shot, leaving the middle girl in shock and her cohorts looking like dejected bookends. It is no consolation that this is the character-building aspect of sports.

But, girls, even older folks remember cheering their hearts out for the home team, and the feeling of the stomach plunging five stories as the boys’ brave efforts fall apart. So you are entitled to a good cry before remembering that you guys whipped them last season, and by golly, you can do it again next time! 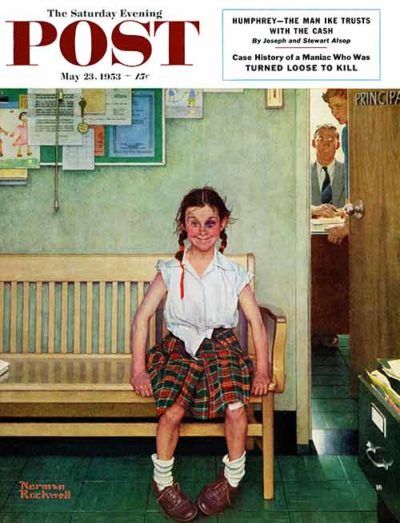 Yes, that is Mary Whalen again. You saw her in the first segment of “Rockwell in the Fifties” as “The Girl in the Mirror” and in “A Day in the Life of a Girl.” But don’t worry, she didn’t really have a black eye—the toddler pictured below did.

Rockwell loved the idea of a smug schoolgirl who bested her opponent in a fight. This, of course, leads to the Principal’s office, where inside there is some discussion on just what to do with the miscreant.

Rockwell underestimated how difficult it was to paint a black eye. He tried smearing charcoal around Mary’s eye, but that didn’t work. A black eye is more complex, with a bit of yellow, a touch of purple, some red, and a certain puffiness. His attempts to create a shiner from memory were not working. He decided to find a kid with a real black eye he could duplicate. He called all his contacts, even local hospitals, but it seemed nobody had a kid with a fresh black eye in stock.

As we would say today, his plight “went viral.”

A Massachusetts photographer decided to run an ad requesting a child with a black eye and it was picked up by the wire services. Rockwell himself offered five dollars for a nice ripe one. Responses ran from a prison warden down South who wrote that there had been a riot and he had hundreds of black eyes available to a father who cracked he would give all of his kids black eyes for five bucks (that joke probably played better in 1953). Finally, a little boy named Tommy managed to acquire two black eyes, as active little kids sometimes do, and his father drove him from Massachusetts to Rockwell’s studio in Vermont. Even the little children must suffer for art, but at least little Tommy got his picture in the Post: Next week: Final installment of Rockwell in the 1950s.