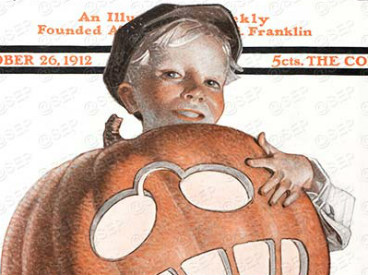 Jack-o’-lanterns, masks, and merriment—in the early 1900s, the ghoulish holiday wasn’t so different than it is today. Theodore Roosevelt was the U.S. president from 1901-1909. Yet in 1912, when this J.C. Leyendecker cover (left) appeared, Roosevelt was still a force of nature. That same year, he had a falling out with former good friend and then-President William Howard Taft and decided to challenge him in the upcoming election. The Republican bigwigs favored Taft though people like this youngster said “Bully!” for Roosevelt. In the 1930s, Anne Estelle Rice (1877-1959) left illustration and began a career designing operatic sets and costumes in London. But her passion for theater was showcased in her illustrations, such as the 1904 cover (left). Rice often drew figures in theatrical costumes and settings. This cover is one of three she did for the Post; the contour lines and simple details shown in the uncomplicated silhouette are definitive of her style. An invalid as a child, Charles Allan Gilbert (1873-1929) drew pictures to entertain himself. He officially took up the study of art at age 16, and at 21 he studied for a year at the Académie Julian in Paris, where greats such as J.C. Leyendecker were trained.

Gilbert chose beautiful, buxom women as subjects, much like his contemporaries: Charles Dana Gibson and Howard Chandler Christy. Besides four covers for the Post, Gilbert illustrated books, posters, and calendars, but his work is often overlooked for the one image he is best remembered for: The intriguing 1892 double image called All is Vanity. 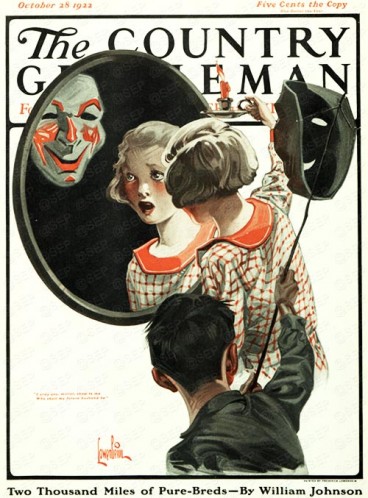 German-born Frederick Lowenheim (1870–1929) was a storybook illustrator in the early 1900s. Like his book illustrations, Lowenheim’s 15 covers for Country Gentleman were often scenes depicting children in amusing situations, such as the Halloween prank on the October 28, 1922, cover (left).

A poem from an early 1900s postcard explains the girl’s horrified expression: “On Hallowe’en look in the glass, Your future husband’s face will pass.” Norman Rockwell painted 35 covers for Country Gentleman, which like The Saturday Evening Post, was published by Curtis Publishing Company. Known as “a journal for the farm, the garden, and the fireside,” Country Gentleman‘s content included farm news, gardening and canning advice, and fiction.

Most of Rockwell’s covers for the farm centric magazine centered around a character he created: city-slicker Reginald, who visits his country cousins frequently, only to be made the butt of their jokes.

In the 1921 Halloween cover (left), however, Rockwell shows us a more peaceable side to country living.