Celebrate Mother’s Day with 1950s covers from popular Post illustrators Richard “Dick” Sargent (1911-1978) and John Falter (1910-1982). And if any of these covers remind you of your own childhood … you might want to order a bigger bouquet. 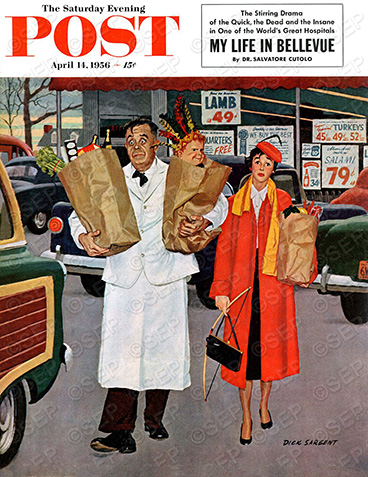 Moms today may not have to reenact the American Indian Wars with junior in the store aisles, but that doesn’t mean multitasking with a grocery list and an active toddler is any easier than it was 50 years ago.

Popular artist Dick Sargent was a master of what art experts have come to call “sitcom covers.” Editors noted of this 1956 cover that Sargent, just to prove it could be done, borrowed a little boy to fit into a paper bag. “He let the boy’s father do it to assure that he himself would not get scalped.”

Sargent’s adeptness with facial expressions told the story: the mom’s weariness, the shell-shocked look of the grocer, and an expression on the boy’s face that says, “My work is done here.” “Once upon a time a very small boy stood on the roof of the garage behind his home,” Post editors wrote of 1953’s Learning to Fly (at right). “He had made every reasonable arrangement to fly down. He had carefully studied the aerodynamics of the situation and met them with the most scientific equipment available.”

The cover was a flashback to a Nebraska afternoon when artist John Falter himself was on the roof of his boyhood home, as his own mother agonized below. And the boy, who grew up to recreate the comical events of his childhood for the enjoyment of Post readers everywhere, eventually found his wings. “What is lovelier than the glow of carefree joy in the faces of happy children?” asked Post editors of this 1952 illustration. “Will the lady on the cover have the heart to defend her food and change those expressions to the pinched melancholy of starvation? She will if she can make it across the room in time.”

Sargent had set the scene for Crashing Mom’s Card Party in his dining room with real pastries, testing the self-restraint of his three sons. “The mouths of those sons began to water,” wrote the editors, “They watered for a week. Two weeks. Three. Then the sons were released at the pastry. They ate it so fast they apparently did not notice it was petrified, claims the fiendish father.” There is much to be said about good intentions, besides the road to you-know-where being paved with them. Adding to the tension in this piece, an apple waits in the unsuspecting Mom’s path (no doubt left by one of her good-intentioned little helpers).

“My main concern in doing Post covers was trying to do something based on my own experiences,” illustrator John Falter said. “I found my niche as a painter of Americana with an accent on the Middle West. I brought out some of the homeliness and humor of Middle Western town life and home life.” Like Learning to Fly, this Falter cover is fraught with enough anxiety to make the viewer cringe for Mom (and Dad). While the artist conveys enough despair for us to recognize that the situation is distressing, the overall effect is humorous.

In addition to childhood’s predicaments, Falter depicted a wide range of subjects, including nature’s beauty and intricate bird’s eye views of cities.

Visit our Artists Gallery and tell us which is your favorite Post cover by John Falter, Richard Sargent, or other artists. For a chance to be featured in our next Readers’ Favorites series, send your email to [email protected]. Remember to include your name, along with the title and date (or just a good description) of your favorite piece.