Over the next few years, COTS built a base of support from foundations, government, and the people of Burlington. Individual contributions came from all over the area and included the annual COTS Walk that draws 1,500 walkers and raises thousands of dollars each year. Past recipients of COTS help have also stepped up to the plate. “Sometimes it was only $15,” says Rita. “But they wanted to give back, and I want people to know that.”

As the need for shelter grew, particularly among women and children, two more shelters were opened and a homeless prevention program got underway. But in 2010, a tumbling economy finally took its toll and crippled local businesses. Many COTS supporters lost their jobs or had to cut back on basics like food and clothing. Contributions sank.

As she walked down Church Street in Burlington that year, Rita ran into Abbey Duke. The two were friends, and Rita updated Abbey on the situation at COTS. And as they talked, Abbey began to wonder if her cookies could do anything to help. After all, cookies sure seemed to work for the Girl Scouts. Abbey sells nine different kinds of cookies at Sugarsnap, her retail food store, restaurant, and catering operation. She also has a small space at the Lake Champlain ECHO Lake Aquarium and Science Center, a popular tourist attraction on Burlington’s waterfront. The cookies are a hit at both places.

“Running a small business I try to do what I can, but there’s not a lot of cash running around,” explains Abbey. “So the idea of selling the cookies and contributing the profits to COTS was exciting.”

Neither Abbey nor Rita had a clue how they would sell enough cookies to give COTS a new revenue stream. But the next day when Abbey was talking with her friend Roberta MacDonald, senior vice president of marketing at Cabot Creamery, about raising money for a new kitchen, the notion of COTS, cookies, and Abbey’s baking skills all started to come together. Abbey chuckles as she recalls the conversation. “Roberta is a force. Within 15 minutes, she announced, ‘We’re starting this program. We’re gonna make cookies, and you’re gonna bake ’em!’”

Which is exactly what they did.

Finding money is challenging for any nonprofit. But during the past two years, achingly slow economic growth, budget cuts, grandstanding politicians, and sequestration has made it a nightmare. Fortunately, Roberta is used to thinking creatively. “I get these brain bubbles,” she confesses. “So I look at something like this and think, ‘We’re farmers. We don’t have any money. What can we do?’”

What Cabot’s marketing team did was develop a program that was both simple and effective: They branded the cookies, “Cookies for Good”; hung banners in the shelters’ windows; and bought ad space on VTDigger.org, a digital Vermont newspaper. Then they sent Abbey a whole herd’s worth of butter and told Sugarsnap’s customers what Abbey, Rita, and Roberta were up to.

Sugarsnap’s customers were key, says Roberta. And not just those who stopped in for one of Abbey’s sustainably sourced salads or a cup of Chipotle Sweet Potato Soup. Suddenly local businesses jumped on the bandwagon, including Ben & Jerry’s, Fletcher Allen Health Care, the University of Vermont, and more. They ordered cookies for holiday parties, weddings, board meetings, corporate retreats, and corporate receptions held in December. All told, the Burlington community ordered hundreds of boxes of cookies to give as gifts to family, friends, clients, and employees. Still amazed at how fast the orders came in, Abbey shakes her head: “We had to learn how to fold hundreds of boxes for thousands of cookies.”

Last year, the Cookies for Good program sold more than 38,000 cookies. And combined with a portion of earnings from Abbey’s catering operation—which also used the cookies—the Cookies for Good program generated a whopping $23,000 during the past two years for COTS, says Rita. “Those cookies kept the rooms warm, the water running, and the lights on for 221 individuals and 117 families. And that includes 182 children who had a safe place to do their homework.”

This year the cookies will help even more. The shelters are already full—and the temperature is headed for zero.

Want to try your hand at one of Sugarsnap’s tasty cookie recipes? Check out Abby Duke’s Bittersweet Orange Chocolate Cookies! 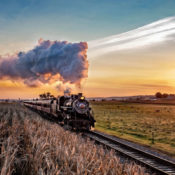