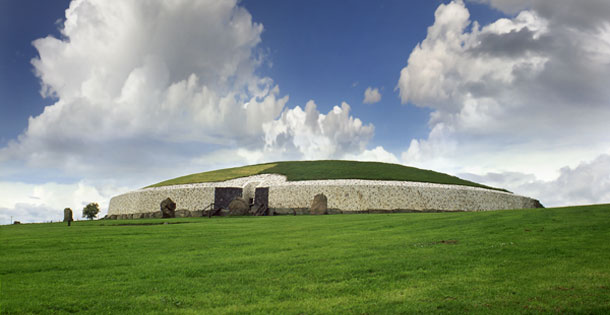 Twenty years ago I rafted the Colorado River in the Grand Canyon. For 16 days, we dug our paddles through the crest of frothing waves and hiked up to side canyons with names like the Silver Grotto and Vasey’s Paradise. I camped out and stared up at clusters of stars so close I could almost grab them, and awoke to the sound of bighorn sheep clacking horns. I’d never felt more free or happy in my life, so when I came back to NYC, I shed a husband who was not interested in having adventures, sold my film production company, and became a freelance writer.

These days, I crisscross the country and circle the globe, often writing about the best suites of the most luxurious hotels, the swankiest restaurants, and the hottest in-spots. If there comes a day when I have to slow down, lay down or die, I hope people will say, “Remember how Margie Goldsmith went everywhere and did everything? Wouldn’t that be fun?

I lay on my back on a cold stone plinth in the Irish countryside in Country Cork waiting for something to happen. The coffin-sized slab was part of James Turrell’s Sky Garden Crater, an artwork built on a prehistoric site and said to be a transformative experience. Ireland’s ancient earthworks have always resonated with me, especially Newgrange in County Meath, a 5,000-year-old megalithic mound where, on the winter solstice, a beam of sunlight creeps across the floor to the end of the passageway.

I looked up at the blue sky and watched the clouds float across it. The slab was at the bottom of a crater surrounded by a grass wall, like a green womb. I closed my eyes and breathed slowly, but I still didn’t feel transformed. After half an hour, I still felt nothing so I gave up.

To get out of the crater, I had to go back through a dark, dingy tunnel–which I didn’t want to do–so instead, I climbed to the top of the hill. From my bird’s-eye view the whole thing looked like a sacrificial spot but not much else. Why did so many people rave about it? What was all the brouhaha about? I pulled out my harp–not the golden harp with silver strings, Ireland’s coat of arms, but a blues harmonica whose gritty notes wafted into the air and took away my disappointment.

Later, as I finished dinner at Liss Ard, home to Terrell’s giant earth and stone work, the general manager approached and asked if I’d had a chance to visit the Sky Garden. Did I like it?

I loved it, I lied. Why couldn’t I tell her it was like the Emperor’s New Clothes?

“It’s extraordinary at night,” she said. “Do you want to see it in the dark?” I nodded. Maybe the dark would make the experience transformative.

Carrying bamboo kerosene torches, we walked along the driveway; under an arch; down the stairs; past the pond; along a forest trail through the dark tunnel; and down the steep stairs to the plinth. We blew out our torches and lay foot-to-foot on the stone slab. Neither of us spoke. I stared up into the inky darkness but it was too cloudy to see stars. After a few minutes it began to rain. “Oh, what a pity,” she said.

We made our way back to the country house. “What exactly are you supposed to feel when you’re there?” I asked.

“It’s personal,” she said. “But if we could only see the stars, it would really be something.”

I sure didn’t come all the way to Ireland to see the stars, so I said “There’s live music in town. Would you like to go?”

I love Irish music, especially the uilleann pipes and Bodhran drum. Unfortunately, by the time we got there, the town of Skibbereen was closed down except for one pub. Inside was a bartender and a three-piece band playing soft rock. “Hey,” the guitar player said as we entered, “Can either of you sing? We need a female singer.”

We both shook our heads and took seats at the bar. The band launched into Neil Young’s “Down by the River.”

“Don’t stay at the bar,” the guitar player said, “Come sit here.” We pulled up chairs and they played Van Morrison’s, “Brown Eyed Girl.” The guitarist asked, “Are you sure either of you don’t sing? We really need another vocalist.” Again we said no. “That’s too bad,” he said.

They played the introduction to Paul Butterfield’s “Born in Chicago,” a song I’d been practicing for the last month. Without thinking, I pulled my harmonica from my pocket and held it up. “I can’t sing,” I said, “but if you play in the key of A…”

“Go way outa that!” The guitarist’s grin was so wide I figured what he’d said was a good thing. I started playing softly, but when it came to the harp solo, I let loose.

“Jasssus, go,” the guitarist said and pushed the microphone toward me. I cupped it with my hands, closed my eyes, and wailed.

They begged me to play a second song and then a third. And maybe it was because I hadn’t felt anything special at the Sky Garden, or maybe it was because I was in a pub in the middle of nowhere, but whatever it was, for me, playing the blues with the Skibbereen boys in Ireland was a transformative experience.