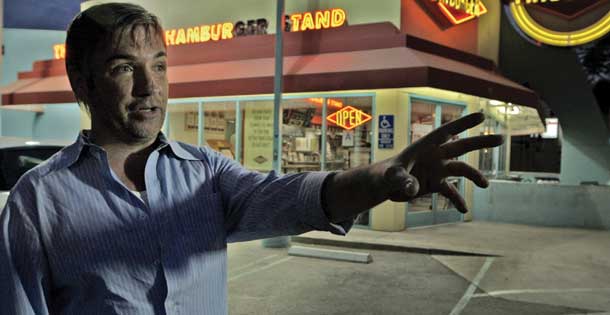 Back in the ’80s, Matthew Boger and Tim Zaal didn’t have much in common. But fate brought them together one horrible evening.

Matthew was a small-framed 14-year-old from outside San Francisco with a sweet smile and a soft heart. He was also gay, and when he told his mother, she couldn’t accept it. “Take it back,” she told him.

“When I wouldn’t, she threw me against the wall and told me to get out,” he recalls. “That’s the last time I ever saw my mother.”

Matthew hitched a ride to Hollywood and made his home in a park off Santa Monica Boulevard. “I lived in that park 24 hours a day, and I ate out of garbage cans,” says Matthew. “I’m not proud of it, but I did whatever I had to do to survive.”

Tim Zaal was a beefy 17-year-old middle-class kid growing up in the San Gabriel Valley area of Los Angeles. But after his brother was shot by a black man, Tim changed. For him, the incident became an indictment of anyone who was different. And it filled him with hate.

He made it to Hollywood almost every weekend as part of the mass pilgrimage of punk rockers that attended concerts in the area. It was a rough crowd. “Violence was a daily part of my life back then,” says Tim. “It was not uncommon to see people pulled out of their cars and beaten.”

One night in 1980, Matthew and Tim met in Hollywood. “I was at Okie’s Dog getting a hot dog,” recalls Matthew. “They had video games, and it felt like a safe place where I could escape my hell for a few hours.” But Tim and his hooligan friends considered the popular hot dog stand their territory. As Matthew remembers, there was a sudden, loud commotion from across the street. As he turned, he saw Tim shouting, “There they are. Let’s kill all the little faggots.”

“I saw the looks on their faces,” Matthew recalls, “and I said to all the other kids there, ‘Let’s run!’”

Matthew dashed down an alley, but Tim’s crew cut him off. They started kicking Matthew with steel-tipped boots, all the while high-fiving each other. Matthew screamed for help, but it only seemed to make Tim angrier. “So I kicked him in the head as hard as I could,” Tim says. “Then he stopped moving.”

Tim recalls being happy he had knocked Matthew out — until he realized one of the girls in his gang was screaming, “Stop, stop! I think you killed him!”

Panicked, they left Matthew in a pool of blood. “It became a secret,” recalls Tim, “one I never talked about for years. But it was always there.”

But Matthew wasn’t dead; he awoke, bleeding, battered, and alone. He crawled across the street to the park and bandaged himself with T-shirts. Finally he managed to get to his feet and walk to a drugstore where he stole first-aid supplies, then made his way to a McDonald’s for a burger. Nobody offered to help. “It was like I was invisible,” says Matthew. “Here I was, covered in bloody bandages, and nobody said a word to me.”

But the harrowing event did not break his spirit. “I knew then that I could not die on those streets,” says Matthew. “Because then they would have won.”

He wound up getting a job at that same McDonald’s. Flash forward three and a half years: Matthew had not only gotten himself off the streets, but back to school to become a hairstylist–and within a decade he was one of the most sought-after in Los Angeles.