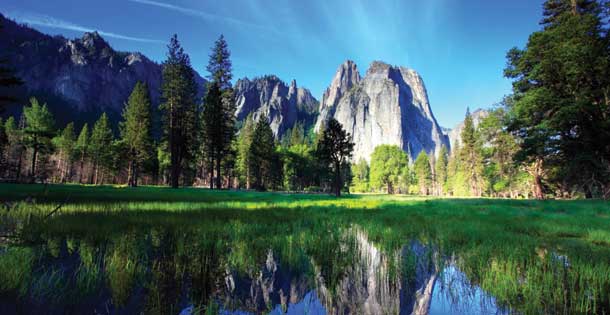 On August 25, 2016, the U.S. National Park Service celebrates its 100th anniversary. We all have our own, personal relationship with the national parks. For some, it’s a world of untouched, natural beauty; for others, it’s memories of fun vacations with family and friends. This series offers perspectives on the history and importance of the NPS. In the feature story from our March/April 2016 issue, author and consummate hiker Karen Berger writes about the past, present, and future of America’s “best idea” as she describes her personal relationship with our national parks. Read more » Many people think of our national parks as places to go see, but as this list shows, there are plenty of activities to do there as well. Read more » “America the Beautiful” is certainly an appropriate description. From the thundering power of the Niagara Falls, the panoramic splendor of the Grand Canyon, and the towering proportions of Mount McKinley, residents are surrounded by some of the most majestic places on Earth. But what about all the places in between? Read more » Interview by Jeanne Wolf
Documentarian Ken Burns talks about what the national parks system means to him and what he hoped to accomplish with his 2009 documentary The National Parks: America’s Best Idea. Read more » From 1938 to 1941, the National Park Service employed WPA-FAP artists to create promotional posters for the parks. Only 14 designs were created before the project was suspended at the onset of World War II. Of the 14 produced, few survived. Read more » In 1953, Horace Albright tells the story of a campaign to save “the Big Trees” for the public. Read more » In 1954, Conrad Wirth, the director of the National Park Service, was responsible for 24 million acres of properties and the myriad troubles that came with them. Today, NPS sites cover an area larger than New Mexico, and the problems keep coming. Read more » Overseeing the Parks Is No Picnic

In 1950, a Pulitzer Prize–winning historian warned the American people to keep an eye on the Bureau of Reclamation’s Colorado River Project, which proposed a dam that would cover most of Dinosaur National Monument. Read more » Long before there was a National Park Service, Americans were traveling to the parks on horseback and in stagecoaches. After the railroads began building spur lines to the parks, they started advertising their park routes to Post readers. Read more » The Post voiced support for the National Park Service bill again in February of 1916. Here, he argues that the wisdom of the plan to preserve these parks for future generations “is so self-evident that no room is left for argument.” Read more » In March 1916, the Post drummed up more support for the creation of the NPS by tapping into readers’ sense of patriotism. The editorial compares America’s mismanaged national parks with the unified (and more popular) Canadian parks system. Read more »