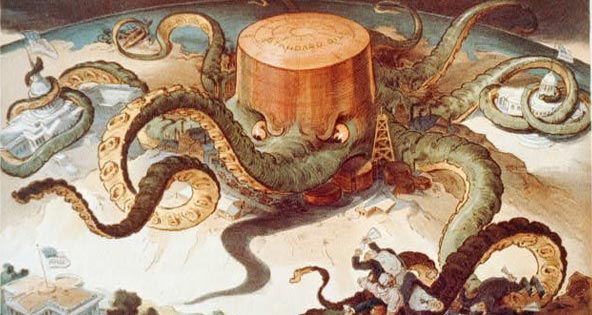 The Supreme Court’s decision in the case of Standard Oil of New Jersey v. United States, handed down 105 years ago on May 15, 1911, was a turning point for both the American government and interstate business. And like any important Supreme Court case, the decision wasn’t without controversy.

John D. Rockefeller founded Standard Oil in Ohio in 1870. The business grew quickly and spread throughout the United States. In 1882, Standard Oil’s principle stockholders came together to turn the business into the nation’s first trust. This trust would involve more than 40 corporations that were connected through complex, impenetrable legal structures, and would eventually control 90 percent of the petroleum business, from drilling to refinement to retail.

Fearing the effects of growing monopolies not only in oil but in tobacco, sugar, and steel, Congress attempted to establish government regulation through the Sherman Anti-Trust Act of 1890, which forbade “every contract, combination in the form of trust or otherwise, or conspiracy, in restraint of trade or commerce.” In 1892, under the terms of this act, the Ohio Supreme Court ordered Standard Oil to dissolve and distribute its share through 20 companies.

The action made little difference to Standard Oil, which operated in several states. It simply shifted its assets and interests to Standard Oil of New Jersey, well outside the jurisdiction of the Ohio Supreme Court, and continued to dominate the market.

Individual states did not have the power to restrain this interstate behemoth; only the federal government could. But the Sherman Act was so broadly worded that a literal interpretation of it would cause more harm to the country’s interstate commerce than allowing the trust to continue and the monopoly to grow. For 12 years, the act proved useless for breaking up anything but trade unions.

In 1900, journalist Ida Tarbell wrote an exposé on Standard Oil, accusing them of gaining market advantage through unfair business practices, including buying up essential supplies to keep them out of competitors’ hands, undercutting competitors’ prices until they folded, and striking secret deals with railroads for exclusive low rates for transporting oil.

With the public crying for justice and fairness, President Theodore Roosevelt took action in 1902, and his Department of Justice filed a federal anti-trust suit against the company. The case lasted over two years, called 444 witnesses, and produced a 14,500-page report, which concluded, in 1909, that Standard Oil should be dissolved. Standard Oil appealed, but on May 15, 1911, the Supreme Court upheld the ruling.

Not for the last time was the argument made that the Supreme Court was forced to do the work that Congress wouldn’t.

The Post had always supported Roosevelt and his progressive principles for both government and business, but this judicial interpretation of federal law had the editors and many others worried. Though the Post approved of the outcome — the dissolution of a monopoly — it was wary of the precedent of judicial legislation that had been established. The following two editorials from 1911 illustrated to Post readers the dilemma that was the Standard Oil Trust.

For a Commission on Trusts

President Taft sent a special message to Congress in which he said, concerning the Sherman Anti-Trust Act:

“The Supreme Court in several of its decisions has declined to read into the statute the word ‘unreasonable’ before ‘restraint of trade.’”

May 15, 1911, in the Standard Oil decision, the court did read the word “unreasonable” into the statute, and Justice Harlan cogently objected that this amounted to legislation on the part of the court. But the court had to legislate because Congress persistently refused to.

The Oil Trust was formally organized in 1882, controlling about 90 percent of the country’s petroleum industry. In 1892 the Supreme Court of Ohio solemnly pronounced it an illegal combination in restraint of trade.

The trust promptly reorganized in New Jersey and continued exactly as before. Meanwhile, it had become evident that the separate states could not possibly exercise effective control over the great industrial combinations that were steadily increasing in number and power, so in 1890 Congress made a poor bluff at discharging its duty to control them by passing the Sherman Anti-Trust Act, which simply forbade them to exist. Of course they continued to exist and to multiply until a large portion of the country’s interstate industry was conducted by them.

When the Supreme Court came to decide the Standard Oil case, it faced the alternative of literally interpreting the statute, thereby disorganizing an important part of the country’s commerce, or of bringing the law into some sort of consonance with the facts. It chose the latter course, and the net result is that with regard to this important problem of control over monopolistic interstate industrial combinations the country stands virtually where it stood 30 years ago. A combination that would then have been illegal under the common law is now illegal under the Sherman Act as interpreted by the court.

More than 20 years ago another phase of this same problem — namely, the need of some sort of effectual control on behalf of the people over monopolistic interstate business — came before Congress. That phase of the problem concerned the railroads, and Congress created the Interstate Commerce Commission. For a long while the commission was moribund; but of late years it has been steadily building up an effectual control over the railroads. It has accumulated and studied a mass of facts in that relation, and Congress has added to its powers when experience has shown such additions to be necessary.

Will Congress create, along the same lines, an Interstate Trust Commission; or will it, for another 10 or 20 years, relegate this growing trust problem to nine estimable gentlemen — trained in law but not in legislation or economics, much burdened with other duties and responsible only to themselves — who constitute the Supreme Court?

What the Sherman Act Has Done

The anti-trust act of 1890 reads: “Every contract, combination in the form of trust or otherwise, or conspiracy in restraint of trade, is illegal.” Deciding the trans-Missouri freight case in 1896, the Supreme Court said: “The plain and ordinary meaning of such language is not limited to that kind of contract which is in unreasonable restraint of trade; but all contracts are included and no exception or limitation can be added without placing in the act that which was omitted by Congress. … In other words, we are asked to read into the act by way of judicial legislation an exception that is not placed there by the lawmaking branch of the Government. … This we cannot and ought not to do.” If the act were to apply only to unreasonable restraints of trade, the court added, “Congress is the body to amend it, and not this court by a process of judicial legislation wholly unjustifiable.”

Fifteen years passed, during which Congress refused to amend the act; but in deciding the Standard Oil case the court did read in the word “unreasonable” — thereby, as Justice Harlan says, not only reversing its former decision but practically amending the act by judicial legislation.

This, then, is one thing the Sherman act has accomplished — caused the Supreme Court to reverse itself and to exercise a legislative function that belongs to Congress. It has also assisted powerfully in the matter of flooding Wall Street with watered stock. The device of a New Jersey holding company was resorted to primarily in order to circumvent the anti-trust law, and vast issues of watered stock have been the most conspicuous by-product of that device. If we had had in the last 20 years an intelligent law permitting and regulating industrial combinations — instead of this Sherman act, which merely prohibited such combinations — hundreds of millions of dollars of watered stock would never have been issued.

And in 20 years this prohibitory Sherman act has not checked the growth of a solitary industrial combination theretofore formed; nor in a solitary instance has it prevented the formation of a new combination. The Supreme Court decisions in the Oil and Tobacco cases hold out no promise whatever of effectual prohibition of, or control over, industrial combinations. Here and there such a combination, after several years of litigation, may be adjudged illegal and forced to reorganize; but the actual trust problem will not be touched until Congress passes new and intelligent legislation on the subject.