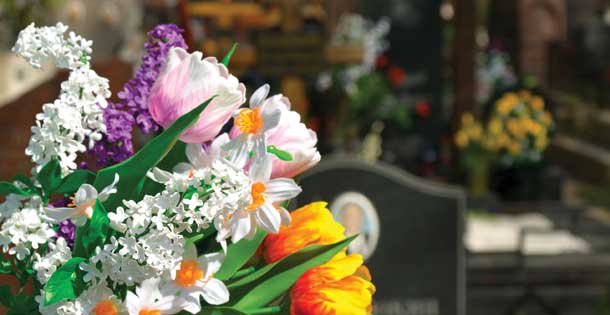 First Law of Etiquette: Nothing about death is supposed to be funny. Ever. But try telling that to Scott Entsminger, of Mansfield, Ohio. Actually, you can’t, because Enstminger died in 2013. He wasn’t going anywhere, however, without first sending an unmixed message to his favorite, if perennially downtrodden, NFL team. “He respectfully requests six Cleveland Browns pall bearers so the Browns can let him down one last time,” his death notice said. You could practically hear the howls all the way to the Ohio River.

These days, death notices and obituaries are increasingly, outrageously comedic. And weird. It wasn’t always thus, of course. Even now, embracing levity when speaking of the recently departed (even if you are the departee) generally invites a scornful “Shame on you.” Traditionalists would just as soon approve of an Amy Schumer sketch at a graveside service.

I suppose it’s a sign of the wackadoodle times in which we live that people have begun turning to these goodbyes — long the last bastion of reverential dignity — to even up scores, influence political voting, or crack a joke. The dead, it turns out, are just like us. Except, of course, for the not-living thing.

This year especially, death notices are being called upon to support or slam various presidential campaigns. “Do not vote for Hillary Clinton,” it said unambiguously in the notice for Larry Upright, a North Carolinian. “Please vote for Donald Trump,” Ernest Overbey Jr.’s notice instructed — in the very same sentence in which was provided the street address of the local brain-tumor center.

Well, let’s grant that it’s one of the few privileges of being gone: Who’d dare criticize you for the awkwardness of your last expressions in print?

Some folks, knowing of their imminent demise, have used the once-in-a-lifetime opportunity to write every sentence of their own obituaries. The results have been uneven. Kevin McGroarty, an advertising executive from rural Pennsylvania, said in his obit that he died after “battling a long fight with mediocracy.” He additionally confessed that he “leaves behind no children (that he knows of).” A real cut-up, that McGroarty.

The dead, it turns out, are just like us. Except, of course, for the not-living thing.

A less circumspect man, it seems, was James William Adams, late of Wyoming, who claimed in his obituary that he was “deprived of his final wish, which was to be run over by a beer truck on the way to the liquor store to buy booze for a date.”

You have to wonder if Adams, when he was alive, had somewhere crossed paths with William “Freddie” McCullough, of Georgia. They shared a punkish spirit. McCullough’s obituary, in 2013, reported that he “loved deep fried Southern food smothered in Cane Syrup, fishing at Santee Cooper Lake, Little Debbie Cakes, Two and a Half Men, beautiful women, Reeses [sic] Cups, and Jim Beam. Not necessarily in that order.”

Not only has the new obit lit taken a turn toward the decidedly odd, it’s opened wide an opportunity for a kind of what-the-hell honesty in the genre. That honesty, in itself, is not a bad thing, but it has unearthed a lot of dark humor amid what you’d normally figure were sad times.

For instance, death notices written by surviving family members, now permit one final chance to drive a shard into the unbeating heart of their unloved ones. These can be horribly unfair. Cruel. And yet spectacularly winning. Let’s have a look at the obit for Dolores Aguilar, of Northern California. It was written of her after she died several years ago that Aguilar “had no hobbies, made no contribution to society and rarely shared a kind word or deed in her life. … Her presence will not be missed by many.” Seriously. I wouldn’t make this up about someone who cannot defend herself. Even if she was a lout.

My absolute favorite of these modern obituaries was written about Douglas Legler, a North Dakotan who left us last year. He’d insisted on a remembrance that was concise. It was. The complete, unedited text of his obituary: “Doug died.” So touching.