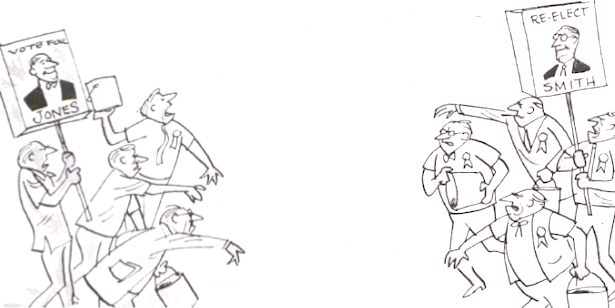 In the last few weeks of the recent election, it wasn’t uncommon to hear people say, “I wish it were already over.” Americans, it seemed, had heard enough negative campaigning. This year, the tone was particularly bitter. When a recent poll asked voters if they were “excited,” “disgusted,” or neither by the 2016 campaign, 82 percent chose “disgusted.”

Americans have come to expect negative, attacking campaigning in our elections, but the speeches and advertisements seem to have grown more bitter and offensive with each campaign.

The Wesleyan Media Project recently studied the amount of negative advertising from the last four presidential campaigns. Between 2000 and 2012 the percentage of negative campaign ads rose from 30 percent to 65 percent. The ugly tone of political campaigns is nothing new, of course. In 1962, Bruce L. Felknor thought it was reaching a dangerous level. A former director of the Fair Campaign Practices Committee, Felknor wrote “Gutter Politics” for the Post in the November 3 issue and proposed solutions for ending the practice.

He wasn’t just worried about the tone of campaigning. He feared that the rise of smear campaigns would discourage qualified people from running for office. Who, after all, would subject themselves to having their past mistakes publicized and exaggerated, or tolerate listening to vicious lies endlessly repeated in the media?

It is generally agreed that negative ads work only on undecided voters, but a study by the Ohio Media Project says that they also reduce overall voter turnout. Moderate voters, it says, prefer to stay home rather than vote in bitter elections. An extensive Rutgers/George Washington University study, however, found no correlation between voter turnout and the tone of the campaign.

Can we expect future campaigns to get even uglier than this year’s? While it’s hard to imagine a more combative campaign, no doubt someone could find a way to take campaigning down an even darker path.

Negative campaigning will probably continue until it loses its influence on voters. But even now it isn’t necessary to a successful campaign. John Hickenlooper won the 2014 governor’s race in Colorado without running any negative ads, showing that it’s still possible to get into office without stepping into the gutter.