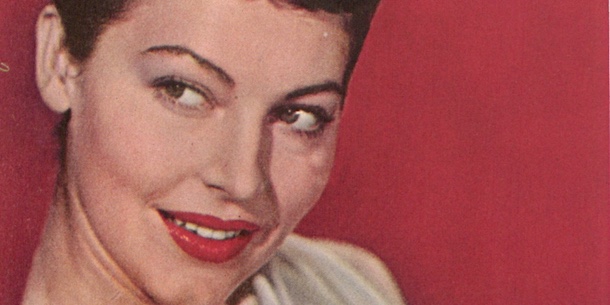 In view of the things that have happened in her career, it is certainly ironic that Ava Gardner should be known to many as “the girl who married Mickey Rooney and Artie Shaw” and as nothing more. This identification is still made automatically, although there are signs that indicate that the ex-Mrs. Rooney and ex-Mrs. Shaw is well on her way to achieving her own identity. Her services as a movie actress are in such demand that when, within a single week, cinema star John Payne was approached by four producers offering him starring roles, each of them held out “We’re hoping to get Ava Gardner as your co-star” as an inducement for signing with them.

More significant still, after seeing her in The Hucksters, a film critic for the New York Morning Telegraph wrote that, although heretofore she had been considered just another bit of Hollywood fluff, she had played the role of the ambitious nightclub singer in that film in a way that showed unexpected talents as an actress, and she had demonstrated that she possessed a personality full of sincerity and warmth, plus a not-inconsiderable beauty. On the basis of this one performance alone, The Telegraph’s critic predicted that she was headed for stardom.

It is equally sardonic—but not at all unusual in Hollywood—that she should have spent four long years at her home studio (Metro-Goldwyn-Mayer) posing for leg art and uttering an average of a little more than one line per movie in a wearying succession of B films, only to have pictures produced by outside studios make movie fans suddenly conscious of her existence. Hollywood took a long, whistle-punctuated look at the sultry gun moll in The Killers and the bosomy hometown girl in Whistle Stop and christened her “M-G-M’s tomato surprise.” (Editor’s Note: In the 1940s, “tomato” was slang term for a pretty, but unintelligent, woman.)

She may have been a surprise to M-G-M, but she is definitely no tomato, as disappointing as that statement may be to collectors of pinupiana. “It depends entirely on the girl,” she says sagely. “I’ve never had to slap the hands of the men who really know me to get them to behave.” But the fact that she has been thought of in tomato terms has given rise to still other examples of irony. Recently, when she visited her bank to make a withdrawal, her shoulder-length red-brown hair flowed helter-skelter. She wore her favorite costume: saddle shoes and socks, a ballerina skirt, a blouse. Her face was innocent of makeup. The cashier looked at her suspiciously, then retired to the rear of the bank to check her signature and consult with the head cashier. When he came back, he apologized and explained, “You just don’t look like Ava Gardner.”

Not only bank cashiers but some of Hollywood’s plushier hostesses seem convinced that when they ask her to a party, one of the screen demimondaines she has played will show up. Not long ago the secretary of a movie mogul’s wife reached her on the phone to say, “Mrs. — expects you for dinner next Friday evening. She is sure you will amuse the stags.”

When such things happen, Ava Gardner is annoyed, but not surprised. “People are always expecting to see a girl like Kitty from The Killers or Jean Ogilvie from The Hucksters instead of me,” she says.

Even in a community with heavy dragon lady and femme fatale content, she is often visualized by the public as a leading member of the breed; out till all hours every night with a new beau, dripping in orchids and mink, and probably having a heavy late date, or two, afterward.

But a number of people in Hollywood who know Ava Gardner when she’s not working in front of a movie camera disagree sharply with the public. If they are to be believed — and they pack a lot of conviction into what they say about her — the hussy-seeming Gardner whom the public meets in newspaper photos, Sunday feature sections and picture magazines is largely a creation of makeup, clever lighting, slick camera work and gossip columnists striving to gratify their readers’ wishful thinking.

According to her lawyer-manager’s wife, Ruth Rosenthal, “Ava is a cushion plumper at heart, a girl who ought to go back to North Carolina, marry some nice man and have a flock of babies.” It doesn’t make for inflammatory copy, but the truth is that Ava spends a lot of time acting as a babysitter for the children of such friends as the Rosenthals.

Ava herself says, “Sometimes as much as two weeks will go by and I won’t have a date. I can’t see any percentage in stepping out just for the sake of stepping. Two months ago I showed up at a drive-in with a boy, and right away the columnists said we were going to be married. The trouble with most of the people in this town is that they believe everything they read in a column, even if they’ve paid a planter to plant it there for them.”

But had it not been for a photographer brother-in-law, Larry Tarr, the North Carolina–born “second-look girl” would have drawn second looks only in her native Tarheel bailiwick. When she was 18, the youngest member of the Gardner family packed her saddle shoes, washed and blocked her sweater collection, and took off to spend a vacation with a married sister, Mrs. Larry Tarr, in New York.

Tarr, a great one for taking people’s pictures in his mind, made a mental snapshot of his young sister-in-law, who sat half asleep across the breakfast table from him. Afterward he strove to capture the same effect in his studio and sent copies of the portraits he had taken to Ben Jacobson, a New York Metro-Goldwyn-Mayer representative. So melting was the result that Jacobson asked to see the original. When Ava was ushered into his office, he gave her a script to read. When she read it, he couldn’t understand a word she said. The girl standing before him not only had the South in her mouth but a large slice of North Carolina’s farming country as well. When Jacobson asked her name, she replied “Aa-a-a-vah Gahd-nah.” She pronounced the word “five” [as] “faave” and dropped her g’s all over his office, like shattered magnolia blossoms.

Jacobson shook his head in dazed fashion and said, “We’ll make a silent test. If I send a soundtrack out to the Coast with nothing on it but vocal spoonbread, they’ll have my head examined.”

Hollywood legend has it that when her silent test arrived in California, M-G-M’s brass reached for their telephones and yelled, “She can’t act; she didn’t talk; she’s sensational! Get her out here!”

But it wasn’t until later that The Killers set Ava Gardner’s feet tentatively on the stardom road. Then The Hucksters established her as a star personality. Yet, ironically, she was reluctant to appear in it. Her reluctance stemmed from two things. One of them she explains thus: “I’d begun to think that playing bad girls had served its purpose so far as I was concerned, and I didn’t want to play that kind of role exclusively.” The other reason was the fact that she was still suffering from an her ingrown inferiority complex stemming from a combination of her “tomato” reputation and her failed marriages, and playing opposite a star of Clark Gable’s magnitude frightened her. Studio pressure was brought to bear upon her, and numerous individuals warned her that she was passing up a fine opportunity.

In the end, she yielded, but when the cameras rolled, she still felt unsure of herself. When she was called upon to sing a song to Gable, she was so embarrassed at warbling a torchy ditty to a star on whom she had had a crush as a teenager that she couldn’t continue until he left the set. “They gave me a chair to look at instead of Clark,” she says. “After that it was better.”

Thankfully, being jittery didn’t stop her from turning in a grade A performance. She even contributed a switch that gave her part more warmth. Her Jean Ogilvie role had been written as that of a rapacious dame, bent upon using her sex to get ahead. Ava didn’t dilute this sex element, but the girl she played was human and understanding, rather than rapacious. She managed to seem the kind of girl who’d rather whip up a cozy meal in her apartment for a man and feed him a shot of after-dinner brandy than blow his coin at a hot spot.

In an interview, Gable said, “Would you like to know who I think is the most glamorous girl on the horizon? Keep your eye on Ava. I think she’s great. I believe that in another two years you’ll find she’s the best young actress in Hollywood.”