If you’ve ever read from the Flat Stanley children’s book series, you’re at least somewhat familiar with the writing of Jeff Brown. Raised in New York, Brown became a child actor after attending the Professional Children’s School. His career took him to Hollywood to work as a producer and story consultant with Paramount Studios, but he eventually returned to the East Coast to work in magazines. Brown worked in the editorial departments of The New Yorker, Life, Esquire, and this magazine.

As an associate editor, Brown wrote a few short stories for The Saturday Evening Post, including “Incident on the Tenth Floor.” The following humor short, a write-up of an imaginary international film festival in Colorado, appeared in the Post in 1968. Brown’s sendup of pretension and absurdity in arthouse cinema came at a time of sea change in art and film. Some edits have been made.

For the benefit of those unable to attend next month’s Pikes Peak International Film Festival, here is a review of the more notable entries.

The lyric pastoralism, the poignant plastic qualities that have long thematically dominated the Swedish film, are much in evidence here. Bathing au naturel in a pond on her father’s farm, lovely 19-year-old Ingrid is secretly observed by a vacationing Oslo banker (Oslö Benker) who later employs her as a maid at his chalet, where she is seduced by her employer’s young son (Jong Söhn) and cast out, only to be held captive in the mountain but of a crazed peat seller (Peter Sellers). Escaping at last, Ingrid returns to her father’s pond; weeping for her lost innocence, she bathes with all her clothes on and drowns.

Awarded the Golden Nude at the recent Trans-Scandinavia Festival, the film is the first directorial effort of one of Sweden’s leading actresses, Mai Güdness, who appears briefly in the role of Ingrid.

Game Warden Ronnie Smythe-Hadley’s documentary account of Fanga, a leopard raised from gamboling kitten to mature pet in the Smythe-Hadleys’ African home. The perseverance of the documentary film maker is particularly evidenced by the thrilling climactic footage of Mrs. Smythe-Hadley being devoured by Fanga under the family piano. “She kept shouting. ‘Shoot, shoot!’” her husband recalls. “I knew she meant film, of course, so I just kept grinding away.” His sob-choked narration of the episode pays tribute to his late wife.

A superb example of Slavic realism, set in the confectionery district of historic Warsaw. In the words of director Stanislaus Czik:

“But now comes to Chocolate Works new bonbon girl, Wanda. Very pretty. very athletic, plays every day ping-pong in recreation hall. For Wanda the foolish Zygmunt feels great love, has dreams to win Christmas ping-pong tournament so she will have love for him. From old raisin box, he makes paddle; every night, secret, he has practice in small closet of miserable two-room flat.

“At last is Christmas! Through storm of snow, old Zygmunt goes in street to tournament. But at gates of Chocolate Works — whoosh! whoosh! — wind blows him down, and now on top of him come one streetcar, one bus. So no ping-pong, no Wanda, no more Zygmunt with his foolish dreams.”

The film is cast entirely with amateur chocolate workers.

VILLAGE ON THE GANGES (India)

The story of a small boy’s efforts to teach his water buffalo to swim.

Directed by S.K.R. Himalaya, whose earlier films (Whirl My Dervish and the musical Hello, Delhi!) have been acclaimed for their trenchant portrayals of Indian life.

An impetuous teenager (Doris Day) rises from obscurity in the Malibu surf to fame in Washington as Secretary of State. The playboy President (Toshiro Mifune) at first resists his love for the pretty Secretary, but surrenders when Supreme Court justices (Peter Sellers) smuggle her into the White House sauna on the eve of World War III.

In addition to the various national entries, the Pikes Peak Festival will offer two features by the controversial “underground” filmmaker, Cess Poole.

BEND MY HANDLE BARS: Socialite actress Baby Grace Hohenzollern bathes with a battered Honda in a tub of lime sherbet.

Presented on five split and revolving screens, both films are dramatically enhanced by the flicker of the stroboscopic lighting for which Poole is famed. “Incredible!” said one critic at a recent preview. “Movies have gone as far as they can go!”

“That statement neatly sums up the entire festival,” says the Pikes Peak program director. “We’re sure all who attend will agree.” 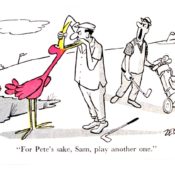