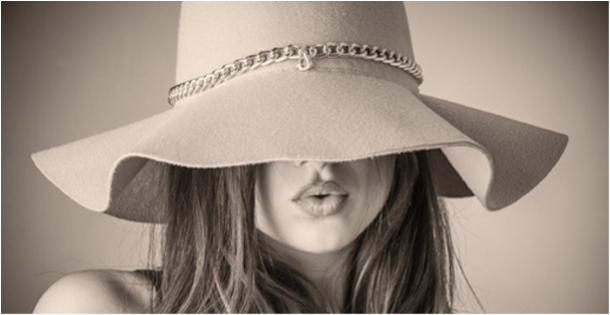 For  more about Gay Haubner’s life in the North Country,  read the other chapters  in her serialized memoir.

To my astonishment, I had fallen in love with an impoverished, unlovely artist. I was equally amazed that I was able to support myself and my elderly Yorkie, Groucho, in a very modest way by modeling, mostly at trade shows and conventions, passing out pens and pins and smiling at salesmen. One weird modeling job, posing as a girl baseball player for promotion material for a men’s magazine, had sent me on a trajectory to my new love, Michael.

I had almost forgotten about my shortstop gig for Oui, when George, the art director who cast me and then introduced me to Michael, told me to come by his office to pick up my baseball card. I was eager to showcase this photo in my modeling portfolio in case another client ever wanted to hire the world’s most unathletic girl to pose as lady baseball player, or any other job that required me to bend over and stick my butt in the air.

Oui magazine was tucked away on a single floor of the intimidating Playboy building. I found George in his cluttered office, bending over a lightbox with a thing stuck in his eye. After moving several stacks of papers and magazines and portfolios he found my baseball card. After admiring my own sporty ass, which the card claimed belong to “Pam,” I turned the card over to read my bio, along with stats about Oui readers, their youth, their salaries, and the impressive amount of money they spent on cigarettes, liquor, and cars.

“Did you write the stuff on the back?” I asked, which George found amusing. No, he told me. They gave the photos to a freelance writer, along with the reader demographics; the assignment was to fill the rest of the card with amusing, sophisticated fluff.

I was baffled how this hoohaw would sell ad space in a magazine, but I knew that I could write better copy than this, an opinion I shared with George, which he found hilarious. I needed to make more money than I was earning modeling. Michael had asked me to move in with him; for some reason he sweetened his pitch by confessing that after paying this month’s rent and child support he was flat broke. If I wanted any more Indian food dinners, they would have to be on my dime.

I argued my case with George. “Look at what the writer made up for me. My name is Pam? Pam? Why not Babe or The Say Yes Kid? Why didn’t he write that I liked to play the field, or that my favorite stadium snack was foot-long wieners? Or since Oui is so European-flavored, that I preferred playing soccer goalie because of my ball-handling skills?”

George, now laughing even harder, took me over to meet one of the Oui editors, John Rezak, who was equally bemused by the Model Who Mistook Herself for a Writer, but who had plenty of time to talk to a cute girl. It turned out that John was also a poet, and I had enough years of English Lit behind me to be able to listen to him discuss in great detail the inspiration behind his epic poem “Laika,” about the first dog to orbit the earth. After he finished reading me several of his verses, the conversation turned to our favorite poets. I won John over with the fact that John Berryman had leapt to his death into the Mississippi River the first day of my freshman winter semester; had I woken earlier (my dorm window faced the fatal bridge), I might have seen him jump.

I showed up in John’s office the next day, with three names, three nationalities, and three different personalities. I gave all of them raging libidos and bestowed on each a sexy quirk: “Would you kick me out of bed for eating croissants?” “I like a spicy meatball.” “Kiss me. What’s the wurst that could happen?

“It was fun,” I told John. “It’s like writing a sonnet: it has to be pretty and it has to fit in an exact number of lines.”

John sat me down across from him, swept up the piles of paper that covered his desk, and dropped them on the floor. He spread out Blondie’s photos and my typewritten sheets and explained what worked and what didn’t, pulling together the final copy from all three versions. John admitted that he didn’t think that there was a single Oui reader who would even glance at what I wrote, but we had to pretend as if they did and pretend to take it seriously. No wurst jokes. No Dutch girls putting their fingers in dikes.

When we were done, John signed a purchase order for me and sent me down to accounting to request my $200 check. I was now a professional pornographer.

I was a professional in the sense that I — occasionally — got paid. All my work was on spec; sometimes John would read what I wrote, throw it all in the wastebasket, and hand me a different set of photos.

Even with the thrill of those first paychecks for writing, it became harder and harder to come up with sparkling new personalities and exotic backgrounds for the models, who were basically interchangeable: perfect bodies, dewy skin, pouty lips, big sunhats, eyes cast coyly upward — or downward, as if surprised at what they saw between their legs.

I was one of several freelance writers; every issue had at least four different girl sets, each six to ten pages. All of us freelancers scrambled to get anything out of the ordinary, anything but nude girl in garden with watering can, topless girl biting her bead necklace, girl stroking feather boa. One day I pulled out of the pile of photos something shockingly different: a guy-and-girl set. This was an anomaly, as the male reader was supposed to look at the photos and picture himself with Miss Oui, not some random dude. (This experiment was short lived; a misguided editor thought that couples might want to look at Oui together.)

The photos were sepia-toned, the setting an old time-y photography studio. The male model kept most of his clothes on, including his hat and spats, while the girl model stripped down to a laced corset, garters, and stockings. I took the mocked-up pages home and had a ball making up a funny, sexy little story to go with the photos and brought everything back to Oui the next day. I couldn’t wait to show John how creative, how talented I was. He read my copy, while I gleefully waited for the compliments and the two hundred dollars. John looked up sheepishly at me and confessed he had given the photos to another freelancer and preferred his version. Of course David Mamet was a better writer of girl copy than I was.

John said, “Sorry. I’ll make it up to you. Pick out something from the front of the book pile.” This was a coup for me. Between the salacious “Letter to the Editor” (“Amelia is one hot piece of ass,” was a typical letter from a sophisticated Oui reader) and the first girl set were six to eight pages of short, supposedly witty pieces usually illustrated with a bikinied or bare-breasted girl. There were also funny photos with clever captions and a handful of reviews.

I pawed through the piles of stuff on John’s radiator and pulled out a few I thought might be fun. I struck out with my first submissions, but eventually started getting a few pieces published each month. I wrote captions for photos of topless girls playing volleyball or in a string quartet, a bunch of dancing Arabs, a dog smoking a cigar, and I finally scored my first review on a book of album cover art. Funny was encouraged but titillating was mandatory.

Freelancers who were higher up on the food chain got first crack at the books and records that came into the Oui office, or John would write a review himself if it were something by a favorite musician or author. I was never going to be allowed to write a Bruce Springsteen review; even Boston’s album Boston was reserved for a writer with more refined tastes than I had.

But I was accumulating a small jumble of my published efforts, and a few pieces actually carried my byline. I was most proud of my rave review of an English book of humorous sketches, some of which left me scratching my head. (“Minutes from the Annual Labor Conference at Blackpool”?) But it was not my own witticisms that got my review published; it was because John and George loved the book’s cover, which featured a large black swastika appearing under the title Golfing for Cats (apparently the best-selling book subjects are golfing, cats, and Hitler).

“Keep tear sheets of all your writing,” advised John. “It will help you get other freelance jobs.” I had no idea what those jobs would be or how one would go about getting them, but I took his advice.

Michael was thrilled that he could stop introducing me as “My girlfriend the model” and start saying “My girlfriend the writer.” He never mentioned that what I wrote was deathless prose such as “Giselle’s ideal man is a combination of Jean-Paul Sartre and Jean-Paul Belmondo,” running under a photo of a naked brunette holding a book no one but my editor and I noticed was upside down.

Michael, perhaps a bit oblivious to the fact that his ex-wife was an actress, signed me up for a class on Writing Theatrical Reviews, taught by a red-headed roly-poly jester of a man, Michael VerMeulen (the Michaels keep coming). The class was challenging and fascinating; it was like being back in college. Every week, VerMeulen escorted his six students to small, inexpensive theaters to watch plays, including David Mamet’s “The Water Engine,” and then he reviewed our reviews (still mad that he had beaten me out on girl copy, I gave Mamet’s play a well-deserved panning).

It was almost as thrilling as getting a check to once again be handed a bunch of my typewritten sheets with “Excellent! Well done!” scribbled across the top in red ink. I knew these two Michaels, Trossman and VerMeulen, would get along like a house on fire; from the moment I introduced them they were trading quips, engaging in intellectual one-up-manship, and trying to outdrink each other.

Michael VerMeulen had a prodigious appetite for everything. After watching him hoover up an entire cheese plate, I began referring to him as “The Cheese Engine.” His idea of a Bloody Mary was half vodka and half hot sauce, with a splash of tomato juice. He guzzled these as if he enjoyed them, his pale moon face growing ruddier and ruddier as beads of sweat popped about his forehead. When I saw him after he had spent a week in New Orleans, I didn’t recognize him: “VerMeulen, what happened?” I cried out in shock.

Michael shook his three new chins. “Breakfast, midmorning beignets, lunch, afternoon oysters, happy hour, dinner, midnight po’ boys…” Michael VerMeulen went on to have a successful career in magazines, landing a plum spot as the editor of British GQ; then he was found dead with over two and half times the lethal amount of cocaine in his system.