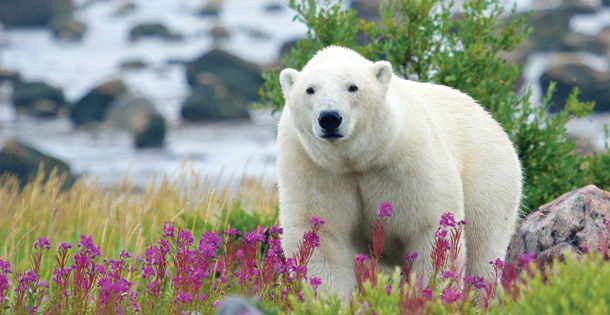 “Hello, beautiful,” the guide says, in the gentlest tone, to the polar bear lumbering toward us. We’d been watching her feed on berry-laden bushes on the muddy shores of Hudson Bay for about 20 minutes before she noticed us and headed over to investigate her audience — a dozen people from all over the world standing awestruck in matching red Gore-Tex jackets.

Our three guides have handfuls of rocks in their hands and rifles slung over their shoulders. But the weapon they use today and most days is sound. At about 40 yards, one of the guides bangs a rock against our metal buggy and the bear jumps back, startled. She veers right and saunters away, looking over her massive shoulder to give us a final backward glance.

“Polar bears are like grizzly bears on Valium, they’re just so calm most of the time. But that doesn’t mean they can’t have a bad day.”

“From a predictability perspective, polar bears are like grizzly bears on Valium, they’re just so calm most of the time,” says Andrew Derocher, a University of Alberta professor who has been studying the bears for 35 years. “But it doesn’t mean they can’t have a bad day or bad interaction or just change their behavior. And that’s always the unknown.”

The female we’d been watching is one of about 800 bears that come to the western shores of Hudson Bay when the sea ice melts around June and July. They pass the warmer months lounging around, conserving energy, and waiting for the ice to come back in November. When it does, the bears climb back on and spend the winter moving over the frozen bay and gorging on seals.

Thousands of tourists come to northern Manitoba every year to see the bears on the shoreline. The bear-watching industry started in the town of Churchill in the 1980s, when a few American journalists showed up and asked locals to drive them to the town dump to see what were then regarded as “giant white rats” scavenge in the garbage. After stories started appearing in glossy magazines, locals upped their game to accommodate the surge of tourists flocking to town. Today, one can take day trips in specially outfitted giant trucks called Tundra Buggies, or spend a week among the bears onboard a mobile hotel room, or fly into comfortable, remote lodges. The bears, meanwhile, have a new nickname: the poster children of climate change.

The bear population in Hudson Bay has been declining — as much as 18 percent from 2011 to 2016. “All indications are that Hudson Bay is not going to have polar bears in 20 or 30 years,” says Derocher. “There are so many things changing in the Arctic right now, it’s hard to predict how bears will respond. Going forward in time, changing sea ice, changing environmental conditions, competition — it’s not going to be the same as it has been in the past.”

It’s an hour-long flight from Churchill south to Churchill Wild’s Nanuk Polar Bear Lodge where we are staying, and along the way, we see a dozen or more bears lounging on the vast beaches below. Our pilot flies along the shoreline, pointing out the white blobs on the mud until we start spotting them ourselves. We land on a dirt strip on the other side of the lodge’s electric fence, where a few members of the local wolf pack sprawl out in the September sun. As our bags are unloaded, we see a black bear walk into the nearby brush. Business as usual in the wilds of Canada’s sub-Arctic.

Over the next few days, we put on our loaner red coats, pull mud-splattered blankets over our laps, and head out in open ATV buggies to look for bears, watch the wolves, and stand in the woods calling moose. Our Cree guide, Albert “Butch” Saunders, has been hunting, fishing, and trapping around Hudson Bay his entire life. He watches tracks to see where the moose might be, and when our buggies pull over, he pulls a string through a coffee canister, creating a wail that mimics the sound of a female moose. Another guide, Josh Robson, sways and dips in the long grass to impersonate a female moose. Eventually the song and dance works, and a massive bull moose emerges in the autumn mist. He doesn’t stick around long once he realizes the deception. Rather, there’s just Saunders with a big grin and a bunch of delighted people snapping pictures. Another day, as the buggies come over a crest of a hill, we see six moose running full out in the distance. More delight.

Back at the lodge, we watch wolf cubs frolic in the fall foliage through picture windows. Several scopes are set up for those who want a closer look. A week earlier, guides and guests watched through the scopes as a mama bear, her two cubs glued to her side, fended off a wolf pack. “It was terrible,” says guide Andy MacPherson of the 30-­minute attack. “But I couldn’t look away.” Many wolves in this area starve to death, and taking down a polar bear would be a feast for the pack of 18. The wolves went for the bear’s neck, but she managed to fling them off and get away with her cubs. The day after we hear the tale of the fight, we see a beautiful black wolf with yellow eyes and gashes along its side. He’s in rough shape and lies down to rest under a tree, watching us watch him. I ask MacPherson which animals he was rooting for during the fight. He just shakes his head: “Nature chooses,” he says.

When we’re outside the lodge’s electric fence, we have strict instructions: Be quiet. Stay close to the buggy. Do what you’re told. The guides use a careful system of deterrents to keep us and the bears safe. It starts with talking to the animals and progresses to startling them with clanging rocks or loud bangers. The rifles remain on the guides’ shoulders. “If I ever had to shoot a polar bear, I’d quit the business,” MacPherson tells me. He’s worked around bears for decades, studying how our behavior affects theirs. “Every time bears are seeing people, they’re learning, and they’re going to react differently in the future depending on what kind of interaction that was,” he says. “A negative interaction would be feeding animals — they’re going to come back. A positive interaction could be they come up and there’s no reward so you end up becoming part of the background.”

“All indications are that Hudson Bay is not going to have polar bears in 20 or 30 years.”

We climb into the buggies and travel about five miles to find a mother and her cub snuggling together on the mud. After about 20 minutes of watching them, the cub, curious, gets up and starts toward us. Mama dutifully follows. Guides MacPherson and Robson stand in front of us, rocks in hand. “Hey there, little guy — how’s it going?” MacPherson says. At the sound of his voice, the bears stop in their tracks. Eventually the cub, his fur gray with mud, gets bored of the sub-Arctic standoff and sits down. Mama bear stays up, lifting her snout to catch our scent 40 yards away. Meanwhile, Saunders stands with his broad back to all of us, scanning the horizon behind us with his binoculars.

“Time to go” MacPherson says, and we climb back in the buggies. As we drive off to the safety and comfort of the lodge, mama bear turns her head and watches us leave. I turn my head too, keeping my eyes on the polar bears as we get farther away and mother and cub turn into dots on the gray horizon, and then nothing at all.

Scientists estimate there are about 26,000 polar bears in the world. The bears have been categorized into 19 different groups, and they live in Arctic regions across five different countries: The U.S. (in Alaska), Canada, Greenland, Russia, and Norway. Most of the bears — about 60 percent — live in Canada, and they all depend on sea ice to get to their main source of food, seals. The four different types of sea ice are faring differently with climate change.

Seasonal sea ice, at the southern reaches of polar bear habitat, including the sub-Arctic Hudson Bay, completely melts in the summer, forcing the bears to come ashore. Bears in seasonal ice areas are the most endangered because they have to wait longer and longer for ice to form in the fall to hunt for seals.

Polar basin divergent ice forms along shorelines and retreats in summer, so polar bears either have to go ashore and fast until ice returns in the fall or swim longer distances to get to the hunting grounds on the ice. Scientists say these bears are at “great risk” because of longer swims, longer periods of fasting, and encounters with humans on the shore.

Polar basin convergent ice both forms locally and floats down from other parts of the Arctic to collect along shorelines, giving bears plentiful access to seals. The bears that rely on this ice are “faring well now,” but scientists are worried the ice may disappear within 75 years.

Archipelago ice is far in on the islands of the Canadian High Arctic and Greenland, stays put even in the summer, and will likely provide a last refuge for polar bears.

Learn more about the science of polar bears at polarbearsinternational.com.

About 4,000 years ago, the Churchill area on the western shores of Hudson Bay was used to hunt caribou and seal. In 1717, it became a trading post that passed between British and French control. In 1942, the U.S. military, with Canadian approval, established a military base there that was demolished in the early 1980s, but the airstrip was retained and now serves as the Churchill airport. The town of less than 1,000 is roughly 950 miles straight north of Minneapolis, and there are no roads that go all the way up. You have to fly in. The only rail route to Churchill was washed out in a flood in 2017 and remains unusable while lawyers argue about who is responsible for repairs, the government or the train companies.

Once you arrive in Churchill, you’ll be bombarded with primers on polar bear safety. Take them seriously. Don’t go for a walk without a local, and don’t be surprised when your young guide won’t let you off the mini-bus until she’s walked around the vehicle clapping to scare off any bears. Vehicles and front doors around town are kept unlocked in case someone encounters a bear wandering down the street and needs to make a quick exit. Special patrols chase bears out of town with noisemakers, paintballs, and even rubber bullets. Bears that keep coming back are sent to the town’s polar bear jail, a former aircraft hangar. Troublesome bears stay until the ice comes and they can be released, or they’re moved far away by helicopter.

When you do visit the polar bear capital of the world, you’ll find more than a dozen different options for accommodations, from small inns and hotels in town to luxury fly-in lodges on Hudson Bay.

Jennifer Allford is a freelance writer in Calgary, Canada. She writes a monthly lifestyle column in the Calgary Herald and has contributed travel stories to a number of publications, including the Toronto Star, WestJet Magazine, and Travel + Leisure. For more, visit jenniferallford.com.