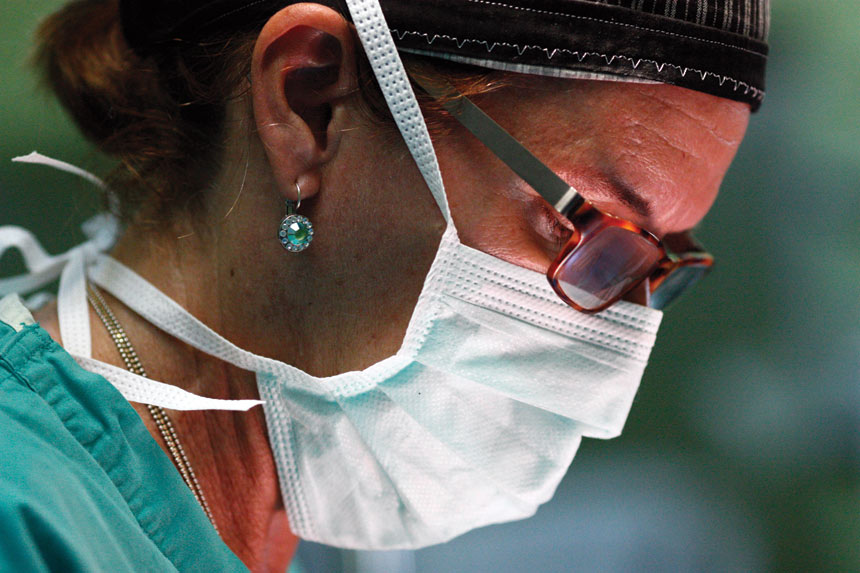 On the day that changed 7-year-old Boi’s life, he arrived at a thatched-roof hospital near his home in Mali, red dust clouds swirling from his uncle’s motorcycle. A softball-sized tumor bulged from Boi’s right cheek. The tumor had dislocated his jaw and disfigured his face, pushing his elongated mouth past his chin. He could barely drink water. Without surgery, the growing tumor would soon block his airway.

Tammy Neblock-Beirne, M.D., was in Mali with the Medical Missions Foundation when she met Boi (pronounced “Boo-uh”). MMF sends volunteer doctors and nurses to underserved communities around the world, and Neblock-Beirne — a general surgeon with Saint Luke’s Health System in Kansas City — was on a scouting trip, but also performing minor operations for another organization. Boi sat patiently as she examined him.

“He looked at me with his huge brown eyes,” she says, “and a big tear rolled over the tumor.”

She turned to Abigail Hayo, an MMF mission coordinator, and they cried, and they both knew: We need to help this child.

When they returned to Kansas City, Neblock-Beirne contacted local specialists, urging them to help, while Hayo made travel arrangements for Boi and his father and worked with the local congressman to secure visas. Three months after they met Boi in Mali, he arrived in the United States. A 10-­surgeon team at the University of Kansas Medical Center conducted a grueling 24-hour operation to resect the tumor and rebuild his face. Neblock-Beirne found herself in an unfamiliar role: Worrying instead of operating.

“I was a mother sitting in the waiting room for 24 hours, wringing my hands,” she says.

Boi was in intensive care for two months and spent the summer recovering in Kansas City. April 2018 marked the 10th anniversary of that first procedure (he’s also undergone five follow-up procedures), and today, he’s a healthy, happy eighth grader who loves video games and soccer and speaks three languages. He spent the summer of 2018 in Kansas City with his two honorary American moms and their families, as he’s done every year since his surgery.

“Our kids and Abby’s kids treat him like a little brother,” Neblock-Beirne says. “He and my husband are best buddies. We love him.”

She never imagined her life would change so dramatically when she first volunteered with MMF in 2005. Since its formation in 1996, MMF has helped more than 63,000 patients in 14 countries (it also runs health screenings for inner-city residents of Kansas City). Neblock-Beirne has made nearly 30 trips — about three missions a year — to countries such as Romania, Vietnam, Panama, Guatemala, and Uganda, frequently serving as medical director and working 15-hour shifts.

“She’s usually the last one out of the operating room,” Hayo says. “She thinks, ‘I have skills and that’s what I’m here for, and I’m going to help as many people as I can.’” The pace can be both exhilarating and exhausting. “You couldn’t keep it up for more than the four or five days that we work,” Neblock-Beirne says. “But it’s also energizing. When you’re doing surgery, you get so focused that you lose track of time. You could be standing there for four hours and think it’s been one.”

That work ethic comes from her upbringing in small-town northern Missouri. She grew up on a farm, but even as a child, Neblock-Beirne wanted to study medicine. She started as a candy striper, attended nursing school, and worked in ICU nursing before becoming a surgeon, specializing in breast cancer procedures.

In developing countries, Neblock-Beirne’s patients frequently have zero access to healthcare. Some have endured hernias and other painful conditions for nearly 15 years. In Guatemala, a woman recently traveled five hours by bus for a bladder procedure.

“So many of the surgeries would be routine here in the United States,” Neblock-Beirne says. “Over there, the people are so grateful. It’s humbling. It’s what keeps you going back.”

“Her bedside manner is incredible,” Hayo says. “In Mali and Uganda, women come in with these goiters the size of grapefruits. I can’t imagine what it’s like not speaking the doctor’s language and not knowing what’s going to happen. Tammy talks to them through translators, but she always has her hand on them. She has this calming, peaceful presence.”

The need for help can continue after the surgeries. Neblock-Beirne tells the story of a 19-year-old woman named Beatrice whom she met in Uganda. “We were screening patients outside on a veranda,” she says. “There were about 500 people, and I saw this woman. She had a baby on her back, and it looked like she had a baby on her front. Two large tumors were growing out of each breast. They were so large they were visible through her clothing.”

The tumors were malignant. Neblock-­Beirne removed them, along with some lymph nodes. After the double mastectomy, Beatrice returned the following year. This time she was pregnant.

“She looked at me and said, ‘How am I going to feed my baby?’” remembers Neblock-Beirne.

Women in Uganda breastfeed; formula isn’t available. So she arranged for Beatrice to receive two years’ worth of bottles and formula.

Good deeds invite more good deeds, Neblock-Beirne has found, and she’s eager to help. This has been particularly true with Boi. She and Hayo learned that Boi’s village didn’t have a school, so they started a nonprofit organization — The Siraba School Village — with Sophie O’Neal, another MMF volunteer, and then launched a fundraising campaign and built a six-classroom school that serves 160 students. The school is run by an eight-person staff, and the organization raises funds annually to pay their salaries and buy books and supplies. It also started a hot lunch program, which has dramatically improved students’ lives.

“So many of the surgeries would be routine here in the United States. Over there, the people are so grateful. It’s humbling. It’s what keeps you going back.”

“The kids are hungry,” she says. “They can’t learn like that. Once we started providing a daily hot meal, our teachers saw a huge difference in their capacity to learn, and parents were more eager to send the kids to school. We also hire mothers to cook the lunches so they can make a little money.”

The next project: Neblock-Beirne and Hayo are working to help Boi attend high school in Kansas City. And she’ll keep volunteering with MMF: She’s returning to Mali and India in the coming months, meaning she’ll once again use her vacation time to work. Does she ever think about trading gallstone surgeries and appendectomies for a relaxing day at the beach?