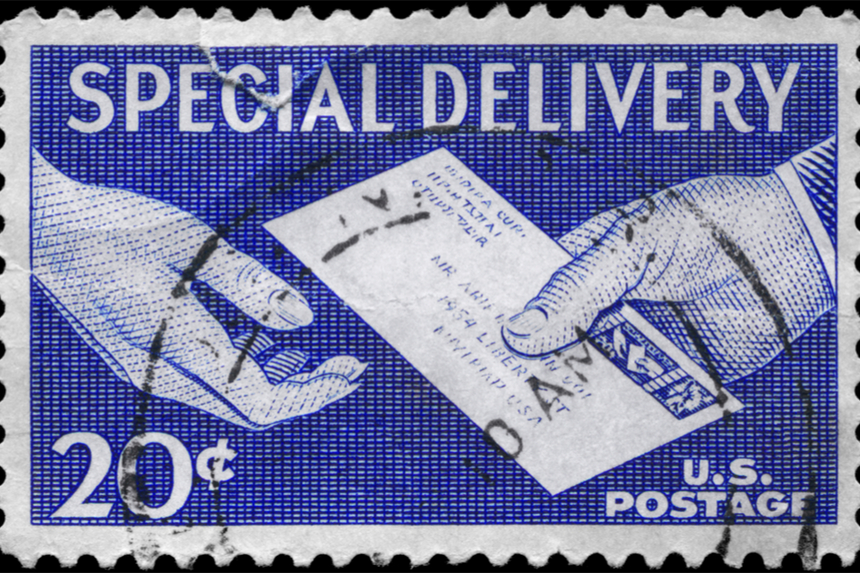 I’m a big fan of snail mail and the post office. I know “there’s an app for that” for many of the things we used to do via mail, but it’s one of the things I don’t want to give up. I still send several pieces of snail mail a month, paying bills, sending official forms, and even writing letters to people. I don’t really understand how, even in this age of the internet, a person can get by purely online, and I say this as someone who is online 10 hours a day.

Then again, I don’t understand how people get by these days not wearing a wristwatch or having cable TV either.

I talked to a couple of people (that was the extent of my research for this column) who absolutely swear they never, ever use snail mail, and even they had to admit that, oh yeah, they do send one or two things via mail here and there, like their rent checks or a bill they can’t pay online (they still don’t understand watches, though).

The United States Postal Service wants to raise the price of a first-class stamp to 55 cents, an increase of 5 cents. It would be the biggest one-time increase since 1991. I say that’s still a great deal. Imagine if mail were just now invented and they told you that, for 55 cents, we’ll deliver your mail anywhere in the country in a few days. We’d think that was pretty amazing, because it is.

I want the USPS to stick around forever, and I vote we say okay to whatever they need. A lot of people assume they take tax money, but they don’t. They have to be run as an independent organization, and they have to go to Congress to get rates approved. The money they lose every year? There are many reasons for that. Sure, I send a lot of email and pay for many things online, but I like the option of snail mail, something that won’t get hacked or get a virus, and that doesn’t make me look at yet another screen.

A lot of people say we don’t need the USPS because companies like FedEx and UPS can handle deliveries. You think FedEx or UPS is going to send a letter to a rural community across the country in two or three days for 55 cents? Good luck with that.

One of the fondest Christmas memories of my childhood is reading the annual Sears Wish Book. I would very carefully go through the catalogue to find all of the items (translation: toys and games) I wanted for Christmas. Then I would make a handy chart for my mom with each item’s name, the price, and the page where the item could be found (hey, I was only trying to be helpful!). They discontinued the catalogue several years ago, though they still publish a much smaller version in Canada and released a special Wish Book and Wish Book app in 2017.

Now Sears has filed for Chapter 11 bankruptcy. They’re closing 142 more Sears and Kmart stores, after closing 45 stores just two months ago and 103 stores a few months before that.

This is sad. I’m not saying I shopped at Sears as much as I did years ago, but it was always comforting to know that they were still there. (And they were the only place that sold my favorite brand of sneakers.) Last week, I went to the mall and the Sears was closed, just a giant wall where the entrance used to be. Next year it’s going to be replaced by a fitness center and a parking lot.

Younger people (and let’s not blame this all on “millennials,” a term publications keep using to describe anyone young) just aren’t feeling American cheese anymore. Sales of American cheese and similar products like Velveeta will drop an estimated 1.6 percent this year, which is the fourth year in a row they’ve seen a decline.

And this isn’t one of those niche things that goes nowhere, a temporary anomaly in the food world. Restaurants have taken notice, too. The A&W chain switched to cheddar, Wendy’s offers asiago, and Panera Bread replaced the American cheese on their sandwiches with a four-cheese combo that people seem to like.

Maybe it’s the plastic wrapper around American cheese. It didn’t used to be sold that way. Maybe if they start selling it without the wrapper and put the word artisanal on the package, younger people would like it again.

I mean, what do young people use for their grilled cheese sandwiches now? Gouda? Brie? This is America, not some fancy place like France!

No Womxn, No Cry

I have a theory: We’re all drowning in information. This isn’t a particularly original observation, but that doesn’t make it any less true. And not only are we overwhelmed by the usual types of information we receive — TV news, newspapers, books, history, social media — it’s that people are trying to change the things we already know, things we don’t need to change.

This week’s example: the spelling of the word woman. We all know that’s the way it’s spelled, right? Well, some people want to change that. A library and museum in London called The Wellcome Collection sent out a tweet — and this is usually how all bad ideas start — asking if the word woman should be spelled womxn, to get away from its origins from the word man and make it “less patriarchal.”

As the cheese-hating kids say today, I can’t even.

Not only is it confusing because that’s not how woman is spelled, the new spelling makes it look like a new cholesterol or blood pressure medication. “Ask your doctor if womxn is right for you.”

If we’re going to change the spelling to womxn, then I insist we change other words too. “Man” will now be spelled m!n, boy will be spelled b2y, and girl will be spelled with nine ampersands: gi&&&&&&&&&l.

One Giant Auction for Mankind

One of the truisms of life is that everything eventually gets sold.

Up for auction on November 1 and 2 (and then continued in two other auctions in 2019) are the private items of first man on the moon, Neil Armstrong, subject of the new movie First Man. Included in the auction of 1,200 items will be Armstrong’s spacesuit from a Gemini flight, letters, items that went with the astronaut to the moon, and even pieces of the propeller and wing from the Wright Brothers’ 1903 flyer.

Armstrong’s parents appeared on a 1962 episode of I’ve Got a Secret. Pay close attention to what host Garry Moore says at the 4:39 mark.

Carol Hall was a composer most famous for the Broadway musical The Best Little Whorehouse in Texas. She also was one of the people behind the ’70s album and TV special Free to Be … You and Me, and worked on Sesame Street. Hall also wrote dozens of songs for artists like Barbra Streisand, Lena Horne, and Tony Bennett. She died last week at the age of 82.

Paul Allen was the co-founder of Microsoft and owner of both the Seattle Seahawks and Portland Trail Blazers. Earlier this year, Allen’s research company found the long-lost wreckage of the USS Juneau. He died Monday at the age of 65.

Peggy McCay was probably best known for her decades-long run as Caroline Brady on Days of Our Lives. She also portrayed Andy’s high school girlfriend on The Andy Griffith Show and Charlie’s wife on Lou Grant. McCay died Sunday at the age of 90.

Oddly, no one knows where the cornerstone is today.

The comic was doing his stand-up act, when Sullivan motioned to him with his fingers to wrap up the act. Mason got irritated and copied the finger movements, and Sullivan thought Mason had given him “the finger.” Sullivan banned Mason from the show for two years, but he was welcomed back in 1966. (For the record, Mason didn’t do what he was accused of, and Sullivan apologized.) Look at all that cheese! Basically, this is a young person’s nightmare ad.

It looks like the cool temps of autumn have finally locked in for the season (he said cautiously), so how about some recipes that scream (or at least whisper) fall?

Midwest Living has an Autumn Beef Stew; Food & Wine has these Chipotle-Roasted Baby Carrots; Bon Appétit has this recipe for Chili Colorado, and our own Curtis Stone has these recipes for the season: Butternut Squash with Sage and Brown Butter and a Shaved Fall Apple Salad.

If that’s not enough for you, The New York Times has a special section of 72 more fall recipes, everything from hearty soups and satisfying pasta dishes to candy apples and rich cakes. You could make a different one every night for the rest of the year and still have some left over for January.

The Boston Red Sox meet the National League winner — which will be decided this weekend — in the 114th edition of the best-of-seven series, airing on Fox at 8 p.m.