I exercise every morning before I begin work. Some mornings I just feel beat, too tired to pump iron or bike, so in addition to my usual yogurt, banana, and cup of morning coffee, I’m tempted to chug down an energy drink to prime my motor. However, knowing how dietary supplements can be adulterated with unwanted and even dangerous contaminants, I’m leery of doing that. In addition, I’ve written that “Energy drinks are in a different class [of dietary supplements]. They often contain caffeine at significantly higher concentrations than coffee and tea, along with other energy-boosting substances, such as guarana, sugar, ginseng, yohimbine, and ephedra … Multiple reports relating the temporal association between ingesting energy drinks and heart rhythm problems, including sudden death, are of major concern.”

More and more people are consuming energy drinks; their market value is projected to increase to more than $60 billion by 2021. About a third of U.S. teenagers aged 12-17 consume energy drinks regularly. The number is even higher – 45 percent — for military personnel. Energy drinks sent more than 10,000 people to emergency departments in 2007. That number had doubled by 2011. The Food and Drug Administration has attributed over 30 deaths to energy drinks.

What is it about energy drinks that makes them dangerous? A new study helps answer that question.

Researchers at the University of the Pacific in California had 34 young (22 years old) healthy volunteers consume two 16-ounce bottles of one of two brands of caffeinated energy drinks or lime juice with cherry flavoring placebo on three successive days with a six-day washout period in between. The researchers measured blood pressure and recorded an electrocardiogram (ECG) every half hour for four hours after drink consumption.

After each heartbeat, the heart requires a rest period to prepare for the next contraction. This time period measured on the ECG is called the QT interval and when prolonged, can increase the risk of sudden cardiac arrest. In the study, caffeinated energy drink A prolonged the QT interval by 6.1 msec compared with placebo and caffeinated energy drink B prolonged the QT interval by 7.7 msec compared with placebo. Once again, the changes may seem trivial, but in susceptible individuals, that increase in QT may be just enough to tip the person into having a life-threatening rapid heart rhythm leading to sudden cardiac arrest and death.

What’s the take-home message? My advice is to avoid consuming ALL caffeinated energy drinks. If you feel tired, your body is “talking to you” and you should listen to it. Rest, or if you must be active, pace yourself. Between consuming plastic and ultra-processed foods, skipping breakfast, and eating eggs, we have enough risks on our plates  —literally! Why add more by consuming caffeinated energy drinks? Avoid them. 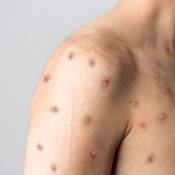