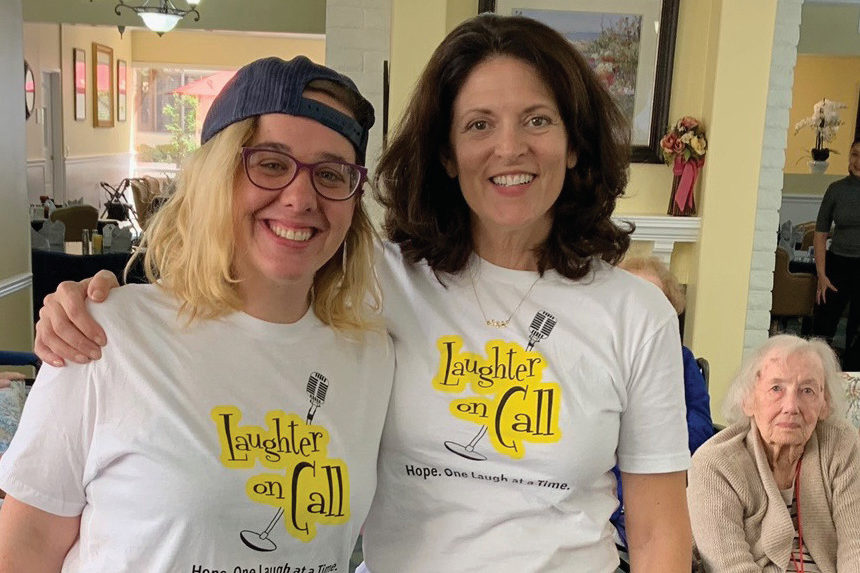 Have you heard the one about the L.A. comedian whose mother has Alzheimer’s disease? Okay, Alzheimer’s is no joke, and this is not a funny story, except that, well, it’s actually a pretty funny story. It goes like this: In 2015, actress, author, and comedian Dani Klein Modisett’s mother was diagnosed with Alzheimer’s. Her mother lived alone in New York City, so Klein Modisett moved her to Silverado Beverly Place, a care facility near her home in Los Angeles. But after about a year, her mom became distant and depressed.

“I thought, ‘There’s gotta be a way to make her laugh,’” she says. Klein Modisett is a comedian, but it’s not that simple. Showing up and suddenly behaving like Carrot Top could be disorienting for Mom. “Unless they’re completely gone, they’re still looking at their child, and there’s still a history there,” she says of dementia patients.

She was brooding over the problem, and aching with guilt, when she had a teary but transformative conversation with … her dentist. And yes, it occurred while she was sitting in the dental chair, her mouth stuffed with cotton.

“I was like, ‘I wish I could just hire a comedian to cheer my mother up,’” Klein Modisett recalls. “And she goes, ‘Why don’t you?’ Typical of L.A. — she’s like a life coach-dentist.”

She soon posted a message on social media: “Looking for a funny person with an interest in geriatrics. Paying gig. Part time.” Within minutes, a friend connected her with a former comedian who wanted to work with seniors. At the first meeting, Klein Modisett’s mom ignored the funny stranger. “Oh, you don’t want to talk to this schmuck,” the comedian said. That word — schmuck — caught her mom’s attention. So the comedian kept saying schmuck, and soon her mom shouted, “schmuck!,” and she began laughing uncontrollably. Within days, her previously withdrawn mother, who had lost interest in food, regained her appetite and was singing and engaging with the people at Silverado.

“It changed my mother’s life,” says Klein Modisett. And other families noticed. “Almost immediately, another family was like, ‘We want that, too.’”

In January 2019, she launched Laughter on Call, a company that provides one-on-one “comedy care” sessions with patients (Klein Modisett’s mother still meets 10 hours a week with a comedian) as well as training workshops for caregivers, family members, and staff at senior centers and healthcare facilities. Comedians also perform interactive sessions with groups of families and patients, which are like improv performances. The comics receive suggestions that lead to characters, scenes, and situations, resulting in laughter and engagement, even among residents with more advanced dementia.

“You can see their faces light up — they engage, laugh, and respond verbally,” says Kathy Greene, Silverado’s senior vice president program and services integration. “It has been transformational to see not only how our residents respond, but its lasting effect.”

The emphasis on improv is no accident. Dementia and improv involve alternate realities, says Klein Modisett, and in both cases, you need to accept that reality.

“There is no point in arguing or correcting,” she says, reciting some frequent pointless rebuttals to Alzheimer’s patients. No, Mom, it didn’t happen that way. No, Mom, it’s Sunday. “Just say yes. Yes, we’re in Coney Island. Yes, we’re in Iowa. Tell me some more things that you love about it. Just go with it. That’s right out of improv and it’s wonderful.”

Klein Modisett chose to make Laughter on Call a company rather than a nonprofit because she believes it’s important to pay comedians for their services, not simply because they’re artists, but because it’s emotionally draining work. “There may come a time when we have a nonprofit arm, so that people who can’t afford it will still have access to what we do, but there’ll always be competition for the artists, and that’s a real priority for me,” she says.

One of Laughter on Call’s investors is Emmy-winning actress Monica Rosenthal, best known for her role as Amy on Everybody Loves Raymond. Rosenthal’s mother suffers from severe memory issues, and with the help of Klein Modisett, a longtime friend, her experiences with her mom are joyful. “It’s all about paying attention, staying in the moment, being patient, and improvising,” she says. At the facility where her mom lives, Rosenthal found a room with costumes such as army uniforms and wedding gowns. The idea, she learned, is to help residents return to their happiest times. Laughter on Call uses the same ­philosophy.

“Dani is a doer,” Rosenthal says. “Laughter on Call is a great idea, but having ideas is easy. Implementation is hard. She is constantly searching out ways to benefit every single person affected, from the patients to the caregivers to the healthcare provider industry as a whole.”

“Looking for a funny person with an interest in geriatrics. Paying gig. Part time.”

That strength and determination surfaced at birth: Klein Modisett nearly died after she was born. “I recently found the letter the doctor wrote saying they’d done everything they could,” she says. As a child, she loved performing, and once she became an actress, she performed on Broadway and appeared in TV shows such as Law & Order. She eventually moved from New York City to Los Angeles and took a UCLA comedy class taught by Shelley Bonus, a former wife of Richard Pryor.

“After the second class, she took me aside and said, ‘Look, I’ve been teaching this class for years and you’re a comedian. You may never do it, it’s a grueling life, but that’s who you are.’” She forged a successful career not only in stand-up, but as an author (including a book on laughter and long-term marriages called Take My Spouse, Please) and comedy coach. With Laughter on Call, she’s now working with the toughest crowds of her career.

“There’s people slumped in their chairs, they’re sleeping a lot — it’s challenging,” she says. “But if you bring that energy, you can reach them.” And it’s not like comedians arrive unprepared, waving a rubber chicken and hoping for a response. They’re armed with information: Families fill out a five-page form on the patient’s interests and background.

“It’s not just that they love ice cream,” she says. “It’s the vacation that went awry — the stuff that triggers a memory.” One of her favorite moments involved a client who’d been a mathematician (“He was pretty far gone, but he could still talk,” she says). She knew that his favorite things included Paul Simon songs and bagels and lox, so she brought bagels and math flashcards and played Simon tunes. When she pulled out the flashcards, she asked, “What’s 12 divided by 4?”

“He was super arrogant. It was so great. Because I thought, he’s still in there, and he thinks I’m an idiot for not knowing that he’s a math professor. I just love that he was able to tap into that.”

Comedy isn’t the only tool for connecting with dementia patients. “Bring their favorite treat,” she says. “Share a cookie and look at each other. Bring music and photographs. Reading to a person is great — whatever they used to love.” It’s trial and error, she says. See what works. And don’t arrive with false expectations. “I’ve sat in rooms where people say, ‘Mom, everything’s fine, everything’s fine,’ and they’re trying to keep mommy propped up. Be present with who and where they are right now.”

Most importantly, she says, don’t be so afraid, or so uncomfortable, that you avoid your loved one.

“People go months without having anyone visit them, because their family says, ‘I don’t know what to do, I don’t know what to say.’ Well, here’s what you do. Bring a muffin, bring your iTunes, bring a book, bring pictures and look them in the eye and smile and talk about your day. And tell crazy stories and engage as if the person is there, because there’s still an opportunity to connect. It just takes a little forethought and a lot of courage.” And, yes, a sense of humor.