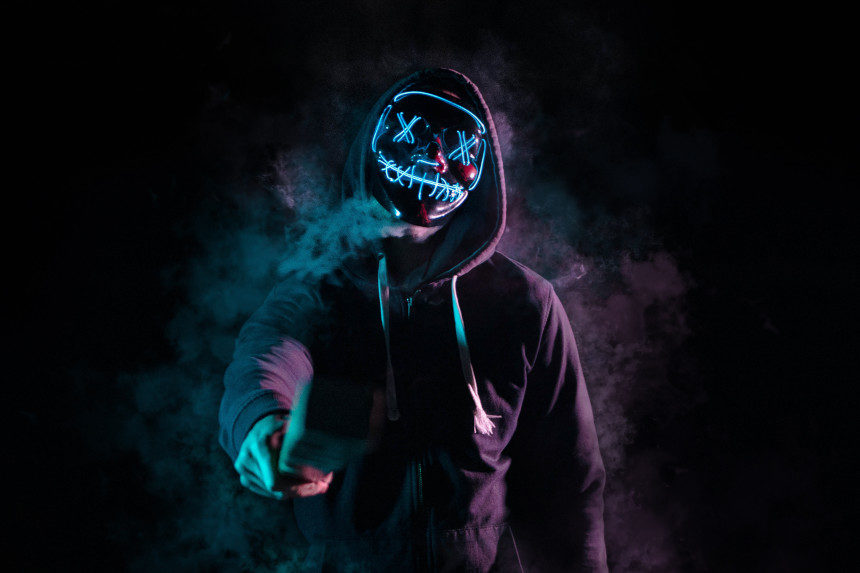 Getting scared at the movies is an American tradition. Ever since the moving pictures added horror (around 1908), we’ve lined up for the thrill ride. And Americans being Americans, we like to find dependable brands, even when it comes to horror. From homegrown, like that original cinematic universe of Universal Monsters, to imports, like Hammer, U.S. audiences have proven that they’ll stick by a reliable source of entertainment. Today, there may be no larger purveyor of big-screen scares than Blumhouse Productions. Founded 20 years ago by Jason Blum, the company has built itself from low-budget thrills to sturdy franchises to genre-bending, award-winning entertainment across genres. But it’s in horror that Blumhouse continues to hang its hat. Here’s how they’ve done it.

Jason Blum built a solid resume before founding his company. He graduated from Vassar College, worked as a producing director for Malaparte (an actor-founded theater company), an exec at Miramax, and an independent producer for Paramount Pictures. His first produced film, 1995’s Kicking and Screaming, was the feature-directing debut of acclaimed writer-director Noah Baumbach (The Squid and the Whale; Marriage Story). By 2000, Blum was ready to strike out on his own and founded Blumhouse Productions. The original mission was to make movies that allowed directors to have full creative control while operating on what’s known as a micro-budget. Micro-budgeted films are made for thousands rather than millions, and when they’re successful, the return on investment can be massive.

Film critic and host of the eponymous podcast The Brandon Peters Show, Brandon Peters, says, “Blumhouse does things the old 1980s way when it comes to horror. . . this super low budget approach is really where you see the talent leap out of the pack as they are able to adapt, overcome and improvise best when the money isn’t there, or make $10 look like a million.”

Forbes film contributor Scott Mendelson breaks down the strategy further. He says, “Blumhouse’s general strategy is to make quite a few films for (comparatively) very little money and then pick and choose which are ‘worthy’ of theatrical release (be it for artistic or commercial reasons) versus VOD, streaming or in a shallow grave. The $3-5 million budgets are essentially what they can recoup if the film doesn’t end up in theaters or a splashy streaming deal, so that everyone gets paid at least scale (with decent backend promises if a movie breaks out) and nobody loses their shirt.”

The trailer for Insidious (Uploaded to YouTube by Movieclips Classic Trailers)

That breakout potential became evident with Paranormal Activity. Oren Peli wrote, produced, and directed the $15,000 film under Blumhouse, who got it released through Paramount; the found-footage horror film made a stunning $107 million at the U.S. box office. Though accounts vary, it may be the most profitable film ever made.

Of course, to sell a film to that large of an audience, you have to have something that grabs their interest. Peters attributes this in part to knowing the audience; he says, “[Blumhouse] aren’t afraid to make movies aimed at a teenage date night crowd and pay attention to that audience’s reception, as opposed to the critics or ‘adults’.” Blumhouse also wasn’t afraid to capitalize on a formula that worked. While they would continue to work on and co-produce films in other genres (like the kids’ comedy Tooth Fairy, co-produced with Walden Media and starring Dwayne “The Rock” Johnson), the company rolled out Paranormal Activity 2 in 2010. It did $177 million worldwide off of a $3 million budget, cementing Paranormal Activity as a franchise and giving Blumhouse a shot at becoming a brand. Peters remarks on how Blumhouse began putting together franchises, again echoing the 1980s; he says, “[The] sequels tend to keep the spirit of what you enjoyed about the original and yet take it in a different and more expansive direction. The Purge goes from Home Invasion to Escape From New York. Paranormal Activity throws out ‘keeping it real’ and does a nifty 1980 set VHS spook show in its third entry, and Happy Death Day 2 U leans heavy on playing with time travel more than slasher in its gonzo second outing. And again…they don’t cost much to make.”

The trailer for Get Out (Uploaded to YouTube by Movieclips Trailers)

Mendelson also notes the power of “the hook” when it comes to selling horror. He says, “The Purge had a great idea (‘a world where crime is legal for 12 hours once a year’), as did Happy Death Day (a young coed has to repeat the day of her murder over and over again until she finds her own killer).”

Though Blumhouse would (wisely, it turns out) remain in the found-footage business with the Paranormal series and other projects, PA3 was joined in 2011 by a traditional-looking, but no less effective horror film in Insidious. The product of the successful director and writer duo James Wan and Leigh Whannell (who made Saw, Saw III, and Dead Silence together), Insidious gets the most of out of its strong cast, talented creators, and $1.5 million budget; it was also popular enough to keep rolling. With the fifth installment of that series just announced, Mendelson calls it “Hollywood’s Most Underrated Horror Franchise.”

After that, Blumhouse kept building successes. While they’ve stayed true to their horror heart, they’ve ventured into other genres and avenues with great results. The jazz-fueled drama Whiplash got lots of award attention in 2014, including three Oscars; that same year, their film for HBO, The Normal Heart, struck Emmy gold. Along the way, they’ve continued to develop horror franchises (Ouija, Sinister) while making prestige films with high-caliber talent, like 2018’s BlacKkKlansman, which was directed by Spike Lee. Mendelson points to that cultivation of relationships as a key to where Blumhouse is today. He says, “What’s (slightly) changed is that they are building a stable of marquee filmmakers (at least among horror nerds) within the Blumhouse label, where it’s not just a Blumhouse movie, but it’s (for example) an M. Night Shyamalan Blumhouse movie (!) The association is so strong that now even when Jordan Peele or M. Night Shyamalan makes a new thriller, everyone assumes that it’s a Blumhouse flick whether they are involved or not.”

Mendelson mentions Jordan Peele, and indeed, his first film with Blumhouse, Get Out, was a major entry in the canon. The 2017 film won a screenplay Oscar for writer/director Peele, and it was so popular that some of its concepts (“the sunken place,” for example) have entered popular vernacular. Mendelson points to the film as a marriage of all the things that Blumhouse does well, including uniting talent, “the hook,” and broader resonance; he says, “Get Out, even before you get into the racial politics, has a primal premise (‘guy goes to spend the weekend with his new girlfriend’s parents and… bad stuff goes down!’) where the specificity (‘Black man spends the weekend meeting the family of his white girlfriend and… bad stuff goes down!’) just adds to the commercial and artistic value.”

Of course, things look different at the movies these days. With the ongoing COVID-19 pandemic, theatrical shutdowns and industry uncertainty are pervasive. Blumhouse, however, has been somewhat ahead of the curve; even as they’ve done huge business in theaters these last several years, they also made inroads into streaming deals. The most recent brings eight pictures to Amazon Films and Amazon’s Prime Video over the next two years under the “Welcome to the Blumhouse” label. Peters, for one, is enthusiastic; he says, “I think the Amazon deal is terrific. [It] appears to be an outlet for more avant garde material and exploring some different unproven filmmakers.”

Assessing the long view, Mendelson says, “I think their investment in TV and streaming is sound, in terms of covering all bases. And considering most of their movies are so cheap, I would argue they are generally prepared for whatever shape the filmed entertainment industry mutates into over the next 12-18 months. Is there still a world where a Blumhouse original opens with $30 million-plus and tops $200 million worldwide? I don’t know, but as long as Blumhouse views those occasions as exceptions to the rule, they’ll be fine.”

In terms of the way that studios like Disney and other have been leaning into releasing their big-budget films on streaming and VOD during the pandemic, Mendelson says to expect a similar strategy from Blumhouse, “depending on how Universal’s deal with AMC (whereby a first-run theatrical release can debut on PVOD (Premium Video on Demand) in as little as 17 days after opening day), we may well see more and more varied movies, from Blumhouse and elsewhere, getting a 21-day theatrical release as glorified advertising for VOD or streaming premieres. If that happens, I’d imagine we’ll see more Blumhouse films in theaters, not less.”

Regardless of where the industry goes, Blumhouse has shown a remarkable facility for savvy deals. After Universal’s stab at reviving their Monsters line in a shared universe collapsed (like Marvel, DC, or The Conjuring) after some failures, Blumhouse got involved. Whannell wrote and directed a new take on The Invisible Man in 2020, which drew critical acclaim and strong box office ahead of theater closures; Blumhouse is already working on new takes on Dracula and the Wolf Man with Universal as distributor. They’re already partnered with Universal in the revival of the Halloween brand, with Halloween Kills, again starring Jamie Lee Curtis, on deck for next year. And that’s while continuing to develop new ideas, new filmmakers, and new deals with other partners.

It’s fair to say that much like Universal in the 1930s and Hammer in the 1960s, Blumhouse Productions has established itself as the go-to name in horror. As one of the most sturdy genre success stories of the 21st century, their facility for attracting talent, concepts, and varied avenues of distribution makes them uniquely suited to survive whatever comes in the next few years. If you suggested to Jason Blum that his company has the best chance to be “the final girl” among all the present purveyors of horror, it’s certain that you’d get a big, if not slightly sinister, smile in return.