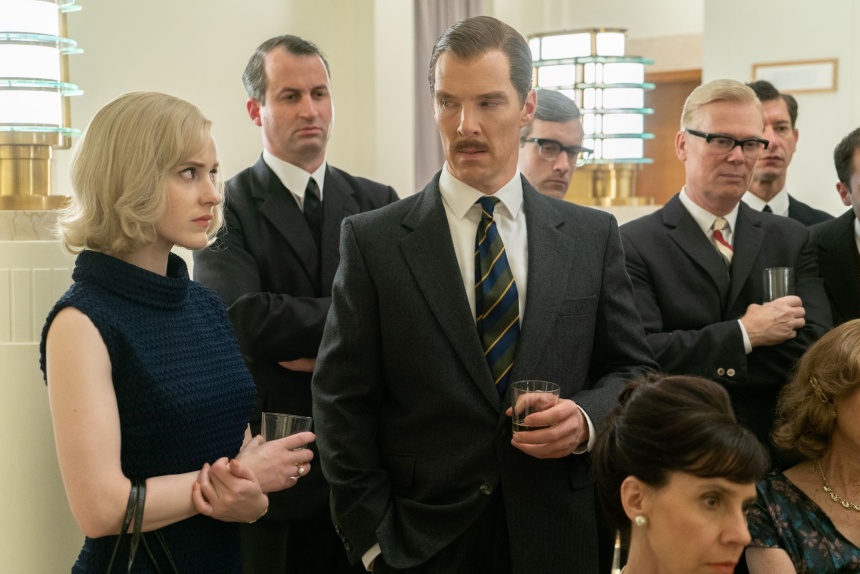 I think movies like The Courier — the true story of a British businessman who risked torture, imprisonment, and starvation to help defeat the Soviet Union’s plans for nuclear domination — are meant to inspire us with the spirit of heroism and humanitarianism.

I mean, here’s a middling salesman named Greville Wynne (Benedict Cumberbatch) minding his own business, when out of the blue British Intelligence, with the aid of a CIA agent (The Marvelous Mrs. Maisel’s Rachel Brosnahan) enlists him to engage in what would become the most consequential spy operation of the 1960s.

He could have said no. He could have said yes just to make them go away. But no. History tells us that Wynne went to Moscow, befriended a Soviet informant worried that his nation was leading the world to Armageddon, and sneaked state secrets to the West.

Would you do that? I’m pretty sure I’d run home to bed and pull the covers over my head.

Cumberbatch’s Wynne does a convincing job of resisting the overtures at the start. After all, he has a wife and a young son. But there’s something burning inside him; something that tells him the fate of the world is more important than his living, his life, and maybe even his family’s lives. Tortured, but resolved, he agrees to set up a fake business in Moscow. And from that moment on, he’s all in. Likewise, Wynne’s opposite number is the most difficult kind of patriot. A high-ranking Kremlin official, Oleg Penkovsky (Russian star Merab Ninidze) could just keep cuddling up to his boss Nikita Khrushchev by day and coming home to his wife and child by night. He’s not even directly involved in the Soviets’ plans to spread their nuclear might to the Western Hemisphere. But he sees catastrophe on the horizon, so he reaches out to the Free World, offering his help in stymying his nation’s ambitions.

In this terse, tense thriller from writer Tom O’Connor (The Hitman’s Bodyguard) and director Dominic Cooke (On Chesil Beach), the stakes grow higher by the minute — a situation made all the more compelling by the fact that either man could, at any time, walk away from this deadly project in complete safety. But they don’t. As Wynne, Cumberbatch knows just how much anxiety to reveal without making us wonder why the Soviets don’t catch onto him immediately. And as the Soviet traitor — a term Oleg uses to describe himself — Ninidze strikes just the right balance between stoic determination and panicky “what have I done?”

As a plucky 1960s CIA agent, Brosnahan brings a disarming chirpiness that suggests Mrs. Masiel turned spook. Her Mad Men-inspired one-of-the-boys spirit is probably true to the era, but she might have been better served summoning a bit of the darkness she revealed in her recent thriller I’m Your Woman.

You might expect the role of Wynne’s wife, Sheila, to quickly fade into the background once her dramatic vulnerability is established. But the filmmakers clearly know they have a good thing in Jessie Buckley, who was so mystifyingly appealing in Charlie Kaufman’s recent I’m Thinking of Ending Things. To Buckley fall two of the film’s most affecting scenes, particularly when Sheila, who knew her husband was up to something but suspected some sort of personal betrayal, is confronted with the noble — and humiliating — truth.

Patriotism and heroism inform every frame of The Courier, a film that comes at a time when those terms have become perilously cheap, too often confused with selfishness and chest beating. It’s good to be reminded of their true natures, even if that means enduring a painful bout of soul searching.