“It was a gift from heaven,” Dave Barrow said.

He and Jack Wallace sat together in the sand on a low rise overlooking the beach. Behind them, parked in the dirt beside the gravel road, was an old Jeep Wrangler; between them was a six-pack of Budweiser with one can remaining. The blue Gulf flashed silver in the midday sun.

Wallace looked at him. “What was?”

“The closing of the bridge. It was a gift.”

For a while, neither of them spoke. They’d known each other for years, and like with many old friends, their long silences were commonplace. The sea breeze combed through the long grass around them as they watched the ocean.

Three days ago, on Monday, a storm had roared through, battering the island for five hours. Not hurricane-­force, nothing like Katrina, which both Barrow and Wallace remembered, or Camille, which was before their time — but enough to cause problems. Roof damage, trees down, an inch or two of floodwater in houses and shops. The following afternoon, the two of them had driven here, to this spot, and as they sat and watched the ocean Barrow told Wallace why he’d decided last night to leave the island. He’d only been here a week, but a week was long enough to make a decision. Marcie didn’t need him anymore, he said — she’d done fine without him all those years he was locked up. She had a life of her own now, and a good business here. So Barrow had asked Jack Wallace to give him a ride to the bus station on the mainland. Barrow was packed up and ready to leave, ready to go back to what he knew how to do.

Wallace had noticed the bulge of the pistol under Barrow’s shirttail as he’d lugged his two travel bags out onto Marcie’s porch, and could easily picture what else was in those bags alongside the folded clothes. Lock picks, Slim Jims, forging kits, things Barrow had probably squirreled away years ago and retrieved after his recent release. Both of them knew what he would go back to doing.

But Wallace stopped him before he could load his bags into the Jeep. He’d asked Barrow to ride with him to their old meeting place instead, for one last talk. When they got there, Wallace said nothing at first, staring south over the shimmering water. Barrow followed his gaze and stayed quiet as well.

Then Wallace told him about the bridge.

That was Tuesday afternoon. Now here they were again, two days later, sitting in the same place in the sand and nursing the last of a six-pack and gazing out at nothing in particular. But this wasn’t a delay before a ride to the bus station, and this time no suitcases were waiting at Marcie’s. This was a meeting just to talk, like they used to do. And to get some things straight.

Somewhere in the distance, behind them, a chainsaw buzzed and whined. There’d been a lot of that these past three days.

“I know about you and Marcie,” Barrow said, interrupting Wallace’s thoughts.

Wallace glanced at him. “There is no me and Marcie.”

“No, I mean I know you dated her, before I met her. She told me that, years ago.” Barrow paused. “I know you still have feelings for her.”

Wallace shook his head. “Nothing happened while you were gone, Dave.”

“I know that. And I knew it two days ago, when I told you I’d made up my mind to leave for good. But I also knew …” Barrow scratched his cheek, the skin smooth and still pale where the prison beard had been. “I knew she’d be taken care of, after I left. Maybe better’n I could do it myself.”

A silence passed. A car rumbled by on the road behind them. When the noise had faded, Wallace caught a whiff of the shrimp fleet, miles offshore. Nothing else on earth smelled like a shrimp boat.

“And then you told me,” Barrow said.

Wallace nodded. What he’d told Barrow was that the storm had caused structural damage to the only bridge between here and the mainland. Barrow hadn’t even heard about it, although that wasn’t surprising. Nobody on this end of the island had heard about much of anything, then or since, with the phone and power lines down. And cell reception was iffy out here at the best of times, much less after the towers were blown around by sustained 70-mile-an-hour winds.

Barrow heaved a sigh. “I don’t know whether I was happy or sad to hear about it. With the bridge gone, and no way out—”

“You had to stay,” Wallace said.

Wallace turned to study his friend’s profile. “And now?”

Barrow broke out a slow smile. “I found myself,” he said. “Or maybe Marcie found me, or I found her. How crazy does that sound?” He rolled his beer can between his palms, letting it clink against his wedding ring. “I know one thing: In these past two days I discovered I needed her. Maybe I always did.”

“Next Sunday’s our anniversary, Marcie and me. Did you know that?” Barrow tipped his head back and took a swallow from the can. “Eight years.”

Finally, Wallace said, “You ain’t had much luck in your life, Dave. You nor Marcie either. Maybe you’re due.”

“Maybe. And maybe I was locked away too long. I didn’t even know how to act, when I got back here to her.” Barrow let out a breath. “Now I can help her. Her folks left her that store, now I can help her run it. Keep the books at least, stock the shelves, make deliveries. Right?”

“She wants to start carrying commercial fishing gear, did I tell you that? Hooks, nets, pulleys. Where do you go for yours?”

“We get that going, maybe you could stop in sometime.”

“I will. I could use better nets.”

“Better’n being a fisherman,” Wallace said, smiling too. “At least you were rich for a while.”

Barrow looked away then, and Wallace felt his smile fade. At least he’d never been in prison.

Twenty feet away, Wallace saw a gray crab lurching its way across the sand, seemingly going nowhere and taking a long time to do it. He watched it awhile — We’re a lot alike, crab, you and me — then went back to squinting at the Gulf. He never tired of that.

After a few minutes Barrow said, solemn again also, “I threw away my tools. I wanted you to know.”

Barrow nodded as if to confirm something in his own mind. “It was a gift, that bridge,” he said again.

For a long time they sat there, the sun warm on their shoulders, the palms around them swaying gently in the wind. In the blue-green distance, a tiny white speck made its way along the knife-edge between sea and sky. A cruise ship probably.

Wallace heard the truck before he saw it — a low growl approaching from the east. He turned and watched the pickup rattle along the gravel road toward them. Its bed contained three tired-looking men sitting along the sides. The truck stopped 20 feet away.

A young man with a ponytail called from the driver’s window: “We got chainsaws. Been clearing trees that fell in the storm. Know anybody who’d need that done?”

“We been doing some of that too,” Wallace said. He leaned back and pointed. “I think Mike Cunningham’s still got a couple oaks down in his backyard. Yellow house, picket fence, a mile west.”

“You boys from the mainland?” Barrow asked.

One of the men in back spat a brown stream of tobacco juice into the dirt. “Yep.”

“So it’s been repaired?”

All the men looked at each other. “What?” the spitter asked.

Ponytail chuckled. “We been over it three times in the past two days, mister. There wasn’t ever nothing wrong with the bridge.”

The words hung there in the air long after the truck had roared away.

Their sandy overlook had taken on a deeper quiet. Foamy, white-tinged waves boiled onto the beach and eased out again. The wind whispered in the tall grass. The palm fronds clattered softly, a sound all its own. The smell of the shrimpers was stronger.

Wallace looked south at the flat ocean. He could feel Barrow staring at him. The white speck in the distance was gone now. The shadows of small, puffy clouds painted patches on the water.

Wallace heard the smile in the voice. The empty silence stretched out.

Without turning, he said, “You want that last beer?”

John M. Floyd is the prolific author of nine books and hundreds of short stories that have appeared in many publications, including the Post, Alfred Hitchcock’s Mystery Magazine, Ellery Queen’s Mystery Magazine, and the annual Best American Mystery Stories. 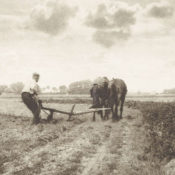