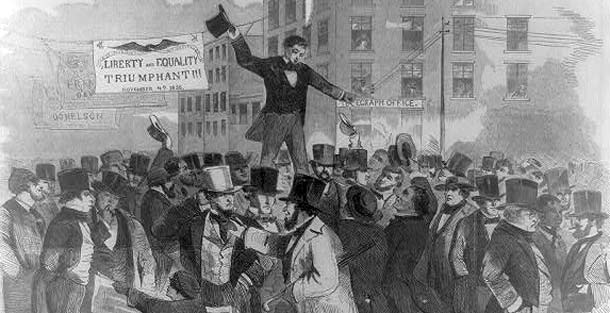 Waiting for the Election Returns in 1856
Library of Congress

Americans were shocked when, during the third presidential debate on October 19, 2016, GOP presidential nominee Donald Trump refused to say that he would accept the results of the presidential election, which he had long claimed would be rigged. Belief in the sanctity of popular elections and acceptance of their outcome are core principles of democracy. We have faith in the electoral process, even if we don’t like who gets elected.

But Americans haven’t always been willing to accept election results. In the 1860s, weeks before any votes were cast, some people were ready to disavow an election: Southern politicians planned to take their states out of the Union if a Republican were elected. As soon as the news arrived of Lincoln’s victory in 1860, the South Carolina Assembly passed a resolution “To Call the Election of Abraham Lincoln as U.S. President a Hostile Act” and declared it was leaving the union. Ten more states followed its example.

But 1860 wasn’t the first time Americans prepared to defy the national will.

Four years earlier, the 1856 election was a three-way contest between Republican John C. Fremont, Democrat James Buchanan, and Millard Fillmore, candidate of the Native American/Know-Nothing Party. Emotions ran high during the campaigning; in Baltimore, for example, the election had prompted “continued and violent rioting during the afternoon and evening,” according to the Post.

A fierce engagement took place between the Democrats of the Eighth Ward and the [Native]Americans of the sixth. Each party was provided with muskets and cannons, and the fight was kept up for over two hours. Some fifty persons were wounded, including a large number seriously. In the Second Ward, the Democrats drove off the Americans. The Fourth Ward Americans came to the rescue, and after a prolonged and fierce fight, retook the polls and drove the Democrats off. The fight lasted over an hour. One man was killed and thirty wounded, several fatally. [November 8, 1856]

The newly formed Republican party opposed the expansion of slavery into the western territories. It promoted the idea of a “Free Society” without slavery or control by an aristocratic class. This policy won Fremont broad support in the North, but the hatred of many in the South, where political leaders assumed Fremont’s election would doom slavery and the southern economy. Through their newspapers, Southerners vilified the North and its ideas of a Free Society without slavery or a planter aristocracy.

In October, just one month before the election, the Post ran an article titled, “The Union: Shall It Be Preserved?” It alerted readers to the secessionist movement in the South, which was stirring bitter resentments against the North and the federal government.

We allude to those Disunion doctrines now openly avowed and advocated by the Secession press in the slaveholding States! These Secession editors evidently are striving with all their might to reconcile the Southern mind to the idea of practical Disunion. They are doing all in their power to stir up bitter feelings against the Free States as Free States. Not content with warring against a particular party, they are warring against the structure of Free Society itself.

Do our Southern readers ask for the proof of this? — let them read the following. The Muscogee (Ala.) Herald says:

“Free Society! we sicken at the name. What is it but a conglomeration of GREASY MECHANICS, FILTHY OPERATIVES, SMALL FISTED FARMERS, and moon-struck THEORISTS! All the Northern, and especially New England States are devoid of society fitted for well-bred gentlemen.”

“We have got to hating everything with the prefix FREE, from free negroes down, and up the whole catalogue — FREE farms, FREE labor, FREE SOCIETY, FREE will, FREE thinking, FREE children, and FREE schools, all belong to the same brood of damnable ‘isms.’ But the worst of all these abominations is the modern system of FREE SCHOOLS. The New England system of free schools has been the cause and prolific source of the infidelities and treason that have turned her cities into Sodoms and Gomorrahs, and her land into the common resting-place of howling Bedlamites. We abominate the system because the SCHOOLS ARE FREE.”

“Repeatedly have we asked the North, ‘Has not the experiment of universal liberty FAILED? Are not the evils of FREE SOCIETY INSUFFERABLE? and do not most thinking men propose to subvert and reconstruct it! … free society in the long run is an impractical form of society; it is everywhere starving, demoralized, and insurrectionary … If free society be unnatural, immoral, unchristian, it must fall, and give way to a slave society — a social system old as the world, universal as man.”

The Post’s editors wanted to alert Northern readers to the South’s plans to defy the government if they disagreed with the results of the election. They cited this 1856 comment from the Baltimore Patriot:

Carolina fire eaters have pointed out in magniloquent sentences, the admirable capabilities of the South for carrying on a defensive war. They have shown how batteries placed in this pass and rifles bristling on that hill side, could work destruction on an advancing foe. Col. [Preston] Brooks has, moreover, advised, in the event of Fremont’s election, that a gallant army of Southerners, equipped with Bowie knife and revolver, shall march in grim procession to Washington, and there seize upon the Government archives and treasury.

Governor Henry A. Wise of Virginia hosted a secret convention of Southern governors in Raleigh, North Carolina in the early fall of 1856. Shortly afterward, the Post ran this item in its October 4 issue.

Preparing for War — The Norfolk (Virginia) Argus states that Gov. Wise has issued through the Adjutant General orders to the commandants throughout the State to thoroughly organize the militia, that it may be qualified “to render effective service whenever Virginia may call for it.”

Fremont lost the election to James Buchanan, but his 1.3 million votes were sizeable enough to keep supporters of slavery worried at the growing support for antislavery candidates.

Four years later, a Republican candidate won the presidency. Southern states promptly withdrew from the Union, and Post readers learned what Governor Wise had been up to in the final weeks before the election:

At a late Union meeting in Knoxville, Tenn., Judge Bailet, formerly of Georgia, stated that “during the last Presidential contest, Gov. Wise had addressed letters to all the Southern Governors — and that the one to the Governor of Florida had been shown to him — in which Gov. Wise said that he had an army in readiness to prevent Fremont from taking his seat, if elected, and asking to co-operation of those to whom he wrote.

Featured image: Waiting for the Election Returns in 1856 (Library of Congress)