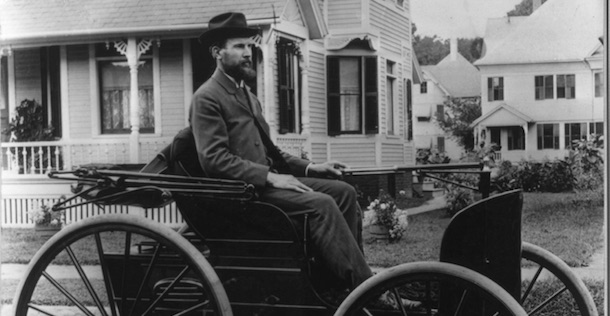 This article from the May 16, 1931, issue of the Saturday Evening Post was featured in the Post’s Special Collector’s Edition: Automobiles in America!

It doesn’t pay to pioneer; not in money, at any rate. Like my fellow pioneers, Haynes and the Appersons, C.B. King and Alex Winton, my name no longer is borne by any car. Only the name of our contemporary R.E. Olds is perpetuated in the Oldsmobile, though he long ago surrendered his interest in the names. Like most of them, I was a bicycle mechanic, and like all of them, a mechanic without technical training.

Why was the development of the automobile left to obscure mechanics without training rather than experienced engineers? Because of the weight of a unanimous and intolerant public opinion that the idea of a horseless carriage was too silly for words. In 1895, when I invited Samuel Bowles II, famous editor of the Springfield Republican, to ride in the Duryea which won the first American automobile race, his reply was: “I appreciate your kindness, but really, it would not be compatible with my position.”

The automobile was an absurdity, therefore it was ridiculous to be seen in one.

It is a mistake to suppose that the automobile was created to supply a demand. The demand was very painfully built up after the machines had been proved, and many of the pioneers foundered. Had I known historically what I was attempting I might have stopped with bicycles. I had the valor of ignorance. If Bishop Wright had sent his sons to engineering school, I wonder if they would have gone on to invent the airplane?

There are three reasons why America was destined to be the home of the automobile — great distances, scarce labor, and cheap fuel. It is surprising only that the automobile was so long delayed. The obvious ideal of mechanical locomotion was the greatest possible freedom of movement, but when Stephenson invented his steam locomotive, it was crudely heavy, while the public roads were bad. So railroads were built especially for the locomotive. In that way the cart got before the horse. Instead of simplifying and lightening the locomotive it was made heavier and heavier and more and more restricted to rails and a private right of way. That in turn fixed in the public mind the fallacy that no mechanically propelled vehicle belonged on the highway.

Hundreds of forgotten men however, did operate steam road vehicles of one kind or another in the century before the automobile age dawned. Nothing came of it because of public hostility. When the automobile era finally opened, the gas car was the Cinderella of the trade. The electric marvels of the trolley car, the telephone, and the Edison lamp had captured the public’s imagination. Until 1900 — and even later — one of the greatest obstacles the gasoline car had to overcome was the general conviction that any day Edison would invent a miraculous electric-powered auto that would sweep the market. Next to the electric came the steam car, because of public familiarity with steam and its 50 years’ advantage in engineering practice. Steam ran the railroads, electricity the trolley cars, while the internal-combustion engine was unknown to the layman.

The Chicago World’s Fair, in my opinion, deserves first credit for the automobile. Just as the Philadelphia Centennial sponsored the bicycle, Chicago stood godmother to the motorcar. In 1890 and 1891, the fair’s promoters advertised throughout the world in many languages for exhibits, offering awards for “steam, electric, and other road vehicles propelled by other than animal power.” Note the absence of any specific mention of the internal-combustion engine.

The First Auto Races gave cars needed dignity and prestige. A thousand experimenters who had been discouraged by ridicule took a fresh hitch at their trousers. I was one of these. What we were able to produce by 1893 was pitifully meager, but 1894 brought enough cars to permit a race in France, won by a steamer, and the next year the first American race was run at Chicago. My third car, begun late in 1893, won that race and a $2,000 prize over Europe’s three entries. It was, in my judgment, the first true automobile combining all modern essentials for the first time. Four Duryeas won all prizes, totaling $3,000, in the second American race on Memorial Day 1896. The same year two Duryeas won the first British road race, London to Brighton, against the best foreign cars.

It doesn’t pay to pioneer, and yet the first American inventor to put money into an automobile venture got his capital back with a profit. He was Edwin F. Markham, a nurse, of Springfield, Massachusetts. I was canvassing for funds to build our first model. Banks were out of the question, of course. The tobacconists of Springfield seemed to be prosperous, and I was concentrating on them this day in the early 1890s. Markham, lounging in one shop, overheard my sales talk. In return for a 10th interest, he agreed to pay bills up to $1,000. If he financed us to a self-supporting basis he was to get a half interest. Eventually he put up $3,000 and got back about $5,000. He lived to see the automobile a commonplace and was very proud of his vision.