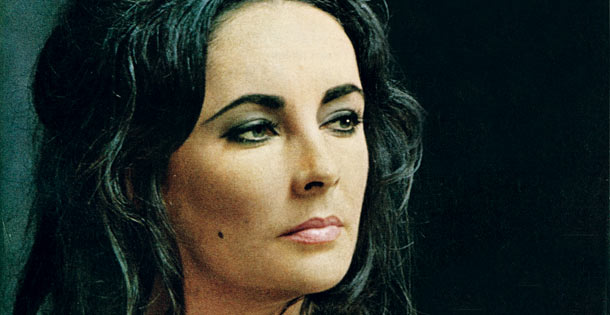 Elizabeth Taylor and Richard Burton had appeared as feuding spouses in the 1965 movie Who’s Afraid of Virginia Woolf?. A year later, they were back at it, making a film of The Taming of the Shrew. Frequently, their quarreling spilled over into real life.

Richard Burton to Liz: “I Love Thee Not”

By Russell Braddon
Excerpt from article published on December 3, 1966
Elizabeth Taylor, wearing no makeup and looking small and relaxed in pink slacks, sat sipping champagne in her dressing room at the movie studios outside Rome. Her husband, Richard Burton, a large, red-bearded, piratical-looking man in a 16th-century costume, was sipping a large vodka and tonic. “Seen the posters for the film?” she asked, pointing to a series of them on the dressing-room wall. The first announced:

Now on location in Rome
ELIZABETH TAYLOR in THE TAMING OF THE SHREW
and introducing Richard Burton.

ELIZABETH TAYLOR, ACADEMY AWARD–WINNING ACTRESS AND SHAKESPEAREAN COACH TO RICHARD BURTON IN THE TAMING OF THE SHREW

“Take no notice of him. He’s only jealous.”

The conversation turned to the new full-blooded Taylor voice, which she had developed, without benefit of voice coach, for the role of Martha in Who’s Afraid of Virginia Woolf? “She can now, at the drop of a hat,” Burton declared, “sound like anything from a ripe old harridan to a boozy old whore.” He saluted her with his large glass of vodka. Glowing with pleasure, she saluted him back with champagne.

“Have a quail’s egg,” she suggested, offering a dish full of them.

Burton was asked how he and his wife came to be starring in a Shakespearean farce under an Italian director, Franco Zeffirelli. He flung himself back in his armchair and began:

“What do you mean, idiocy?” demanded his wife, who knew what was to follow.

Burton slapped her on her stomach. “Look at that,” he invited, and the entire studio looked. “Isn’t that belly disgraceful?”

“… when Franco Zeffirelli decided that he wanted to do The Taming of the Shrew as his first film, he sent a colleague of his to see us. And this chap tells Elizabeth what Franco is planning, and that he wants her — who’s never done Shakespeare in her life — to do the Shrew. So naturally I waited for him to ask me — who had starred at the Old Vic — to do Petruchio. But not a word! Not a hint of a word! Apparently Franco didn’t think I was witty enough.” Mrs. Burton laughed callously. “It was only later, when he was taken to see my Hamlet, which was rather a witty Hamlet — not my fault, but it was — that eventually I got the job. … Everyone assumes, of course, and quite properly, that I was asked first. But incredibly I wasn’t. So we might as well get that clear for a start.”

“Absolutely not true,” Zeffirelli said, coming into the room. “Richard is very gallant to Elizabeth — well, sometimes he is very gallant to Elizabeth — but it is absolutely not true. I asked them both at the same time. Always I thought of them together. And, in the end, we even decided to produce it together. It will be the most artistic Shakepeare picture ever made,” he concluded modestly.

“But not stuffy,” Burton reminded.

“And also, of course, there’s the fact that whilst Elizabeth and I both wanted to do this film, no outside producer, for Shakespeare, would put up the kind of money we can demand.”

Mrs. Burton looked immensely contented at the thought of the kind of money she can demand, even though, as the co-producers, she and Burton had to put up $3 million to pay for their own services.

The Burtons had arrived in Italy with a large entourage, their children, some 200 pieces of baggage, and a mad assortment of pets — “allegedly the children’s, but they’re Elizabeth’s really,” Burton claimed — that were said to include three dogs, two cats, five goldfish, three tortoises, a young rabbit, and a bird. It is a nervous habit of Zeffirelli’s that, when he first meets a person, or even meets again someone he has not seen for some time (like one day), he will admire some part of the person’s apparel. He greeted Mrs. Burton, the day she arrived at the studios, by admiring her earrings — which were of diamonds and indeed wholly admirable.

“They were a present from a director,” Mrs. Burton advised. Then she added sweetly, “It was his first film too.”

“But I think it would be very difficult,” Zeffirelli demurred, “to find something that will top those earrings.”

“No,” she murmured. “There’s a little shop on the Via Condotti called Bulgari …”

“I don’t understand your English accent,” Zeffirelli interrupted hurriedly, Bulgari being in Rome what Tiffany is in New York. “Come and look at the costumes.” But he returned the next day with a bracelet, in enamel and precious stones, that once had belonged to Napoleon’s sister, Elisa Bacciochi. Delighted, Mrs. Burton thanked him and explained that actresses give directors gifts only when their film is completed.

Work began, at the studios, at 9 a.m. — which meant getting up at 6 — and this was one aspect of her work about which Mrs. Burton cared less than passionately.

“Isn’t that wife of mine here yet?” demanded Burton one day. “I swear to you, she’d be late for the last bloody judgment. A quarter of an hour late, in fact, and Liz thinks she’s early.”

Eventually Mrs. Burton arrived, looking composed, uncontrite, and professional. Immediately, Zeffirelli, who directs by playing all the parts and miming extravagantly, launched into his version of how she should act during the morning’s scene — tearing his hair, fighting, spitting and shouting.

“Franco,” she remonstrated, deadpan, “don’t do it all for me, please.”

Mrs. Burton first acted the scene for the cameras, and then — since the microphone couldn’t follow her — did it a second time for sound alone.

“Bravo,” the Italian technicians cheered as she finished. Mrs. Burton giggled, then confessed. “You feel a damned idiot doing that.”

“And to think,” her husband retorted, “that some fool in London once wrote that Elizabeth was overpaid, overweight, and undertalented.”

“Not true,” Zeffirelli assured her, his arm round her shoulder, his eye roving clinically. “You are not overpaid, and you are not ­undertalented.”

“Dear Franco,” she murmured, and kissed him.

Burton slapped her on her stomach. “Look at that,” he invited, and the entire studio looked. “Isn’t that belly disgraceful?”

At last she was stung. “In Egypt,” she observed coldly, “they adore it. The only trouble is, my films are banned in Egypt, so they never get to see it.”

She, Burton, and Zeffirelli discussed once again, finally, what must be done in the next scene, and then indulged in the usual banter about Zeffirelli’s demonstrativeness, Burton’s alleged pleasure in close-ups of Richard Burton, Mrs. Burton’s lateness and ­operations, and Mrs. Burton’s costume, the bodice of which was laced up.

“Franco, I can’t. There’s enough of me showing already. Any lower and my bosom’ll fall out.”

After a long day on the set, they consoled themselves with generous libations of vodka and tonic — and the morning after, early on the set, felt quite unwell. Mrs. Burton looked glowing, but she made it very clear that she felt awful.

After one take she stood in front of her small mirror and dabbed sweat from her brow.

“Pure vodka,” she declared. Right hand supported on left wrist, she painstakingly mascaraed each eyelash; to her evident astonishment, she avoided poking an eye out.
A piece of costume jewelry clattered to the ground in the middle of his last line and ruined the first take. On the second, a bird high in the studio rafters cheeped shrilly. During the third take, Burton forgot his lines. On the fourth, a carpenter dropped a hammer and destroyed Burton’s ­concentration entirely, though not his good humor.

On the next three takes in a row, Burton fluffed his last line; and on the fourth he fluffed everything, but carried on, cheerfully inventing.

“That went very smoothly, I thought,” he declared as he passed the camera. “Shall we use it? Or would you like it in Welsh now?”

“Let’s go to lunch,” his wife suggested. “It’s not going to get any better.”

After lunch it went perfectly.

On the last day at the studios, Mrs. Burton asked Zeffirelli to come to her husband’s dressing room. “Tomorrow I fly to New York,” he told them, “to produce Anthony and Cleopatra at the Met. But I will miss you.”

“We’ll miss you too,” Mrs. Burton told him. “So here’s something to remember us by.” And she gave him a superb cigarette case of heavy gold decorated with a large sapphire and inscribed:

CARO FRANCO — FROM THE SHREW AND HER TAMER.