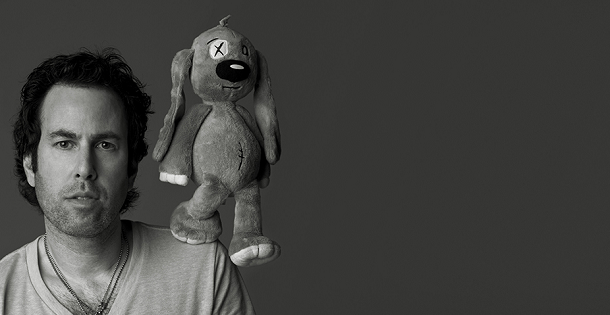 In 1993 Adam Gaynor had a miniature nervous breakdown. He was starting to think he might be crazy for pursuing his dream of being a successful musician. At 30 years old, after working at a pizza joint, a video store, a day camp, and Sports News Network, he found himself as the night receptionist at the famous Criteria Recording Studios in Miami. Gaynor was speaking to his mother on the phone during his crisis: “She said, ‘Adam, this is your dream. You don’t want to wake up at 50 years old and think, why didn’t I try harder?’”

Two years later, in 1995, Gaynor was recruited to join a band that became Matchbox 20, and he spent 10 years touring the world as a rhythm guitarist with the top-charting alternative rockers. His position at the recording studio put him in “the right place at the right time.” Within a few years their songs “3 AM,” “Push,” and “Real World” were radio hits. But these days, when he wakes up, 53-year-old Gaynor has a new dream. Maybe he’s not so crazy after all.

Adam Gaynor believes he can inspire kids and adults to fulfill their own dreams with a message of love and hard work. This is where his company, Creationville, Inc., comes in. The startup is Gaynor’s foray into the world of animated media and merchandise.

Gaynor has big plans, but they all boil down to one mission: “I hope I can create iconic characters,” he says. Gaynor is inspired by the worlds created by Walt Disney and Tim Burton, and he hopes Creationville, with its offbeat monsters, will encourage kids and their parents to dream big and work hard.

The first step is Edgar Pingleton.

Edgar is one of Gaynor’s creations. He is feasibly a rabbit — but possibly a dog —with visible scars and a misplaced eye. Gaynor says, “He teaches kids the idea that it’s okay to give and receive unconditional love from something that’s not perfect. Edgar looks a little worn, like he’s been through a lot of stories in his lifetime, but he still has this happy disposition.”

Gaynor is the CEO and Art Director for Creationville, and he has spent years racking his imagination to undertake his unique vision for the company. This vision includes an arsenal of creatures like Skratch and ChinBoo, an antithetical pair of cute monsters, and Kursed, an animated series about a boy living in a town of the undead. The series will combine pop music with situation comedy in a world reminiscent of The Twilight Zone.

Starting a new venture was, for Gaynor, a decision he had to make about what came after the band: “Do I want to build this company, or do I want to sit and watch Court TV all day?” He knew exactly what he did not want out of his life: parties, indolence, self-destructive behavior, the common trappings of ex-rock stars. “I think no matter where you come from or what is in your past, you have to be accountable for your next move,” Gaynor says.

The Matchbox 20 years were pivotal for Gaynor. It was then that he realized his own potential for success. Gaynor said he appreciates the dedication of career musicians, rockers like Keith Richards and Bob Dylan with “music in their DNA,” but he always felt he had more than music to contribute to the world. Long bus rides with the band afforded Gaynor time to experiment with photo-editing software and flex his creative muscle thinking up stories and characters.

“I know it sounds stupid, but you’re conditioned to a different life,” Gaynor says regarding star treatment on the road. He grew accustomed to getting service and following rules. His schedule was given to him every day as well as his meals, laundry, and anything else he wanted. “If you wanted a goldfish, you’d write it on a piece of paper, and it shows up.” Gaynor says that he wasn’t out-of-touch, but transitioning out of that lifestyle and into one of “going to the post office for yourself” was an enlightening experience.

“The transition is deciding who you are as a human, what you want to do with your life, and realizing the things in your past are part of your foundation while they don’t define you.” Gaynor is grateful to have had the luxury of time to figure out exactly what he wanted to do. One of his greatest takeaways from being in a band played endlessly on the radio was discovering the level of success he can aspire to in all of his pursuits.

Creationville is no exception. Gaynor is thinking big: books, movies, games, and merchandise. He also understands that the media landscape of today is strikingly different than it was 20 years ago. In the recording industry the platforms for exposure have changed. Gaynor says, “It’s all about social media and going viral.” His approach of “being in the right place at the right time” would not necessarily work in 2017, but he still believes talent can and will shine through.

Given his history as a “bad student with trouble focusing,” Gaynor wants to spread his message: “I’m no different than anyone else. If I can achieve something great, there is no reason why anyone else can’t do the same thing.” He stresses that it’s all about hard work and an earnest approach. Gaynor claims he always believed he would be successful. When he was 12 years old he played guitar along to The Eagles’ record, Desperado, and he had an epiphany: he sounded just like the band. Gaynor thought he could have a future in music, and he was right. Now he wants to start all over again. He is eager for Creationville to launch this year, and, as he often jokes, to find out whether he is “a mad genius or just completely mad.”