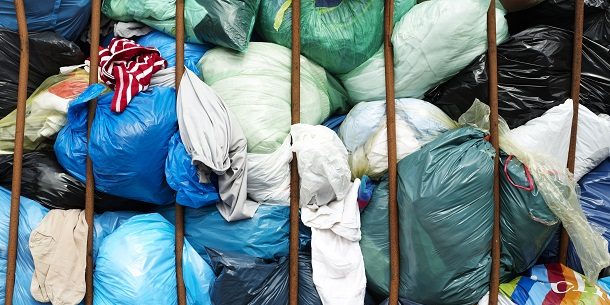 No one sets out to dump half their body weight in clothing into landfills each year, presumably, but somehow it still happens. Rubber, leather, and textiles make up more than 9 percent of municipal solid waste in the U.S. according to EPA estimates. That means the average American throws away about 81 pounds of clothing every year.

“That’s a lot,” says Jackie King, the executive director of the Secondary Materials and Recycled Textiles international trade association. She says this is unfortunate: while 95 percent of used textiles can be recycled, 85 percent land in the trash. One reason for this disparity could be public perception of waste and recycling. Though American recycling rates have more than tripled in the last 30 years, textile recycling has not enjoyed the same popularity as glass, plastics, and paper. “So much of the time, people aren’t aware, they think no one would want something because it’s out of date or has a rip or is broken. They don’t realize it could be recycled,” King says.

King’s SMART represents for-profit textile reuse and recycling firms all over the world. Companies like USAgain and American Textile Recycling Service are involved in collecting, moving, sorting, and recycling all kinds of materials. You might recognize some of these “rag yards” from the donation bins they’ve peppered throughout cities in the last 10 years or so. Even nonprofit organizations like Goodwill Industries and The Salvation Army sell to such companies what they cannot use or store.

The — sometimes illegally placed — clothing donation bins of for-profit textile firms might seem problematic. Even if the bins aren’t blocking the sidewalk, people tend to think of clothing donation as a charitable act that should benefit someone living in poverty, preferably in their own neighborhood. As Elizabeth Cline explains in her book, Overdressed: The Shockingly High Cost of Cheap Fashion, there are far more textile donations to charities than can be resold in-house, and clothing donation should instead be thought of as recycling. According to the Council for Textile Recycling, 80 to 90 percent of donations to charities are sold to recyclers. From there, 45 percent is exported for reuse — mainly in Africa and Asia — and about 50 percent is recycled.

“We want people to think of textiles like they think of paper, glass, and plastics in terms of recyclability,” King says. The reason for this much-needed paradigm shift is that clothing consumption has risen sharply: from 1999 to 2009, U.S. post-consumer textile waste grew by 40 percent.

So-called “fast fashion” can bear at least some of the blame for America’s stuffed closets. The term has been used to characterize retailers like H&M, Zara, and Forever 21, who flood clothing markets with quick-turnaround trends and cheap threads. Marc Bain wrote about the neurological draw to fast fashion in The Atlantic, saying “If seeing items you want and getting a bargain both elicit waves of shopping joy, you couldn’t engineer a more pleasurable consumer culture than the modern, globalized West… First, the clothing is incredibly cheap, which makes it easy to buy. Second, new deliveries to stores are frequent, which means customers always have something new to look at and desire.” And the rise of online shopping presents even fewer impediments to snatching new garments.

Besides providing an unlimited supply of future landfill fodder, retailers have been under fire for pitching unsold clothing themselves. In 2010, a Times article documented trash bags full of apparel that had been cut with scissors outside of an H&M store, including coats and shoes. A similar incident at Eddie Bauer last month prompted a New York councilman to suggest fining the practice. The idea behind destroying and disposing of unsold apparel is that it protects the value of the brand and prevents fraudulent returns.

Trashing good clothing, however, has proven to be a bad look for corporate retail. In 2013, H&M started a garment collection program in which stores give vouchers in exchange for used clothing. Patagonia, The North Face, and American Eagle Outfitters have all launched similar programs that funnel used textiles into the recycling sector and spread awareness of textile waste.

This sort of retail advocacy for textile recycling is refreshing to Jackie King, of SMART, since it advances their mission of keeping clothes out of the garbage. She says there are other things for consumers to consider, however, such as buying for quality instead of quantity. Well-made, durable clothing can stand up to several lives of wear, which means it’s better for reselling and reuse.

As far as recycling goes, textiles made up of one material — 100 percent cotton, linen, etc. — are the easiest for current operations. King says a future could be possible with technology to separate fibers or further streamline the recycling process, but right now the goal is to get people thinking about the end of life for their clothing.

SMART’s associated companies have varying scopes and focuses in the post-consumer textile world. Phoenix Fibers, in Arizona, works largely with denim, turning it into a substance called “shoddy fiber.” This is used in housing insulation, sound dampening, and even prison mattresses. The process for breaking down and repurposing textiles differs from plant to plant. At Phoenix Fibers, it starts with a guillotine, chopping the clothes into workable parts. Next, a proprietary machine is used to extract metal buttons and clasps from the textiles, a seemingly pesky step made easier by equipment developed by the company. After the metal pieces are “liberated” from the fabric, it is sent through a series of rotating cylinders covered in sharp pins that shred the fibers. Phoenix Fibers processes around 2.5 million pounds of material this way each year.

King says that other companies turn shoes into rubberized asphalt and sheets and towels into industrial wiping rags. Whatever the textile may be, in order to be recycled it must be dry and clean — free of stains by solvents or mildew.

With the rise of for-profit rag houses, and the omnipresent opportunities to use charities as middlemen, there is nary an excuse for your 1982 Iron Maiden tour tee to end up in a landfill.