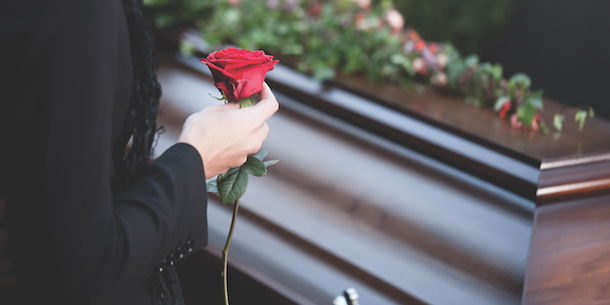 Fond farewell: A funeral offers a way both to relate to our own feelings about death and to give "testimony to the life of the person that has died." (Shutterstock)

It’s understandable if you think traditional funerals are passé. We have been treated lately to stories about shooting a person’s ashes (or cremains, as we in the funeral business call them) into space and placing them into biodegradable burial pods from which trees can sprout. Others advocate eco-­friendly “green” burials, in which unembalmed, shrouded bodies are buried in wicker caskets.

These concepts may grab the attention of readers, but they are not the reality of funeral service. I know this because in my long career as a funeral director, I’ve had a front-row seat to the importance of funeral customs. “When words are inadequate, have a ceremony,” says grief counselor and educator Dr. Alan Wolfelt. “The elements of ceremony — music, symbols, words, actions — help us know what to do when we do not know what to do.”

In mortuary school, the importance of funerals was drilled into us. They “confirm the reality of death,” I recall one teacher saying.

“Without meaningful funeral rituals, the Department of Sanitation could do our job,” said another instructor.

But it was the sentiment of 19th-century British Prime Minister Sir William E. Gladstone that resonated with me the most: “Show me the manner in which a nation cares for its dead and I will measure with mathematical exactness the tender mercies of its people, their respect for the laws of the land, and their loyalty to high ideals.”

That rituals matter is a truth I have come to learn over the years in dealing with grieving families. The value of funerals was re­inforced to me in a deeply personal way as well. When my dearest friend Peter died, I respected his wish not to have a funeral. I’ve always felt that he — and I — had been shortchanged, that the absence of a funeral suggested that his life hadn’t mattered as much as the lives of others. But there was more: I didn’t get the opportunity to say goodbye. Without a funeral, “something is left hanging,” says Rabbi Alvin I. Kass, chief chaplain of the New York Police Department. “People lose the chance for one last time to come together and express their love and appreciation to a person who has played a pivotal role in their life.”

Those who are experimenting with new types of funerals may well believe they are keeping the ritual alive. But the value of ritual comes in part from the tradition — from the sense that the ceremony connects us to those who have come before us and who were honored in the same time-tested way. While people may now want to talk about funerals as “celebrations of life” — and they can be that — no one should lose sight of how much they are also recognition of an end.

“The funeral ritual is a public, traditional, symbolic means of expressing our beliefs, thoughts, and feelings about the death,” Wolfelt says. “It gives testimony to the life of the person that has died.”

Even the most elaborate of funerals, far removed from the small private family funerals that we often see, manage to embrace the traditions of our way of death. The 2013 funeral of former New York City Mayor Edward I. Koch stays with me. It was a template for what a good funeral should and could be: a mix of tributes, tears, and laughter, with a body present. It all underscored what his life had meant to the city and how his death affected its citizenry. At the conclusion of the funeral service, as Koch’s casket was being shouldered down the long aisle of Fifth Avenue’s Temple Emanu-El to the strains of “New York, New York,” he was given a standing ovation by 2,500 mourners, many with tears in their eyes. It was a shared experience, both public and private, of mourning and healing among fellow New Yorkers.

Undoubtedly, funeral customs evolve. Visitation hours have gone from three days to one, and personalization abounds. Perhaps the biggest change has been in the increasing popularity of cremation. Around since the Stone Age, it is merely an alternative to burial or entombment. But the number of cremations has increased substantially. In a report released by the National Funeral Directors Association, cremation surpassed burial in 2015.

But even this practice has become the source of confusion. Many people opt for what is known as “direct cremation” without knowing what it is. With a direct cremation, no services are held. My clients often ask in surprise, “But aren’t we going to see him?” They are often left with the sense that something is missing. In my experience, there is an almost primal need for the chance to say goodbye.

“I see the funeral as a classroom, in that hearts and minds are more reflective,” says Rev. Frank I. Williams, senior pastor of Wake-Eden Community Baptist Church in the Bronx. “There is a proverb found in the Old Testament that states, ‘Sadness is better than laughter, for sadness has a refining influence on us.’ There are some lessons that can only be learned in the context of sadness, grief, and loss.”

At no time in recent memory was the meaning of a funeral more evident than in the aftermath of September 11. Families desperately sought the recovery of any part of their loved ones’ remains and were agonized by those left unidentified. Helen Martinez, from Queens, lost her husband Ed in the tragedy, but remains were recovered. “It meant the world to have a funeral,” Martinez said, stressing that “it was such a relief to have something to hold on to and a place to go.” Martinez kept in touch with a group of September 11 widows whose husbands’ remains were never found and described them as “going through hell.” Rabbi Kass, who spent months comforting families, said, “people want to hold on to every last shred of the life they loved, and remains clearly fulfill that need.”

I’ve been reminded over and over how much funerals mean to people as they pore over every detail, from the choice of clothing to that of a final resting place. It’s as if they are giving a final gift. All the elements that compose a funeral — memorial cards, photo montages, eulogies, the religious service, and the funeral procession — combine to make the funeral a tribute to a life well-lived.

It is for the survivors that funeral directors work hard to make the deceased presentable. Cynics might see this as artificial and a denial of death, but the memory that should remain is not of a person ravaged by illness or a catastrophic death. Countless times, I have seen the look of relief on the faces of mourners as they go up to the casket for the first time. It is from them I’ve heard, with gratitude, the words “she looks beautiful,” or “this is how we want to remember him.” That the deceased looked “so peaceful” was of immeasurable comfort to the survivors.

As Rev. Williams said, “Funerals are as much for the living as they are for the deceased. On the one hand, they offer us a space and time to honor the life of the now deceased, and on the other hand, they remind us of our own mortality — that one day life as we now know it will have a final chapter.”