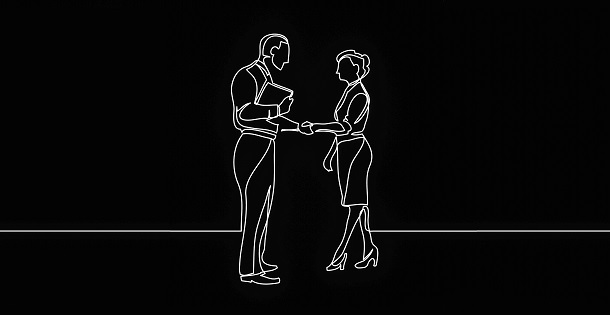 You can sniff out a lie, right?

The deceiver always cracks under pressure or blathers nervously about unimportant details. They shift their eyes to the right.

In reality — although most people feel as though they can tell when they’re being lied to — our ability to determine truthfulness is probably not much better than chance.

Julia Minson teaches negotiation as an Assistant Professor of Public Policy at the Harvard Kennedy School. In one of her classes, Minson conducts an experiment in which four students report to the class on the happenings of their previous day. Two of the students, however, are instructed to fabricate their stories. After interrogating the volunteers, their peers vote on who is telling the truth. In a class of about 60, the students are unable to deliver accurate results. “These are Master’s-level students of policy,” Minson says, “Most people think they can tell a lie from a truth, and they really can’t.”

Even with minimal preparation, it’s fairly easy for most people to invent a believable falsehood. But there is help for the truth-seekers out there. Although you might not be able to discern if someone is telling you a bald-faced lie, you can shrewdly phrase your questions to extract the truth. Especially in stressful situations, the style of your query can determine whether you get an honest answer.

Minson led a series of recently-published studies on eliciting the truth in strategic negotiations — situations like interviews or purchasing a car. People tend to think of asking questions as an opportunity to gather information, but, in reality, the way you phrase questions reveals a lot about yourself. The answers you get could depend on what you’re projecting.

“When you ask questions that are more direct and assertive, it signals to the other person that you’re knowledgeable about an area and you’re not easily fooled,” Minson says. Since negotiations tend to make people anxious, many fall into the trap of asking softball questions when buying a used car or touring the umpteenth apartment in a long search for housing. A tendency for passivity can be escalated by inexperience, too. The bottom line is: if your ask is docile, people might be telling you what you want to hear instead of hard facts.

If the tactic makes you feel a little like Tom Cruise drilling Jack Nicholson in the courtroom in A Few Good Men, that’s because using assertive questions that assume problems is common in legal spheres. It’s all about cornering your “witness” with evidence and forcing them to take a stance. If you give people room to equivocate and eschew the truth, odds are that they will.

The next time you find yourself negotiating, ask the tough questions and bear awkward silences as long as is necessary to get the salesman (or contractor or hiring manager) to spill their guts.

The behavioral science of seeking the truth is a little more complicated between people with established relationships. Since friends and lovers have developed opinions of you over time, they’re less likely to read too much into your intelligence and experience from a single question. Minson says that it is still important to be mindful of how the questions you ask can reveal your opinions and knowledge, though. The way you bring up a new topic to your spouse or child can signal your position on the matter whether you intend to or not.

For impressionable adolescents, just asking questions can normalize behavior. That can be a good thing if you’re asking teens about exercise, but interrogating them unfoundedly about illegal drug use could backfire.

Given the new insight into cut-throat negotiating, does this mean we should all become hyper-aggressive schemers aiming to manipulate others in search of pure honesty? Probably not. A straightforward approach to strategic situations could help you gain an edge, though, as long as you can handle the truth.