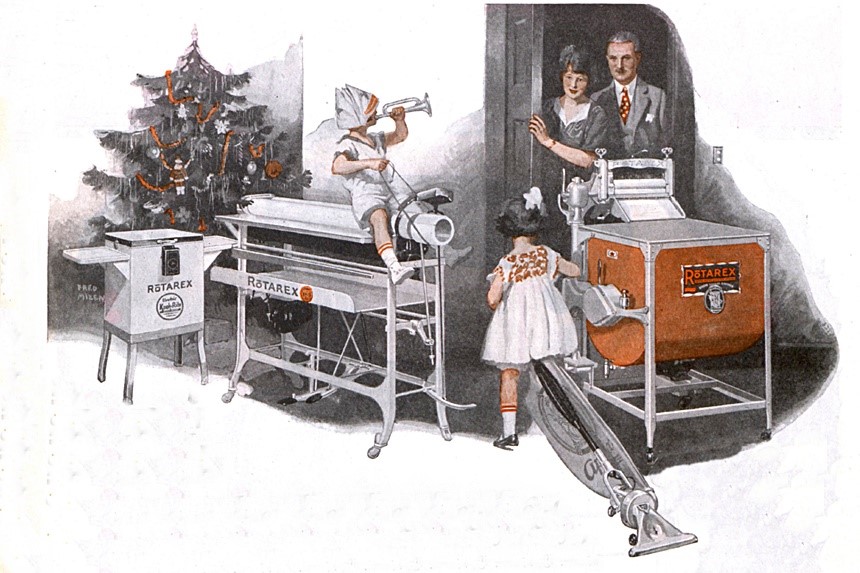 The merchandise that was advertised in The Saturday Evening Post throughout the 1920s tells a lot about the era. The Great Depression had not yet descended upon America, and people were excited to spend their money on the latest cars, home appliances, and fashions.

The first Overland car was produced in 1903, and the last in 1924. This 1920 ad encourages the man of the house to buy an Overland as a gift for his wife, an indication of the growing ubiquity of automobiles, the acceptance of women as drivers, and economic times that would allow a family to own two cars.

Prince Albert was a brand of pipe tobacco introduced by R.J. Reynolds in 1907. If the recipient was half as enthusiastic as the advertising copy, then this gift would have been a resounding success.

Mesh bags were all the rage in the 1920s, the perfect accompaniment to the new flapper style.

Cars were evolving rapidly in this era, and the old touring cars (a car without a fixed roof) were falling out of favor. A Rex Top could be installed at the dealer in a matter of hours.

Along with advances in automobiles and building materials, many new household appliances were making their debut in the 1920s. Whereas a “diamond necklace is nothing more than a handful of jewels,” these electric servants would give your spouse the gift of time. Many of these items were new to homes: the washing machine was patented in 1916, and the first motorized vacuum cleaner was invented in 1907.

Collar buttons, cuff links, and tuxedo sets from Krementz were “of pleasing design, finely made, and above all, correct.” Krementz was the leading maker of collar buttons worldwide, a business that vanished once detachable collars fell out of style.

This ad for Iver Johnson bicycles promoted bikes for boys, girls, dads, young children, and tiny tots. As the automobile became more affordable – and thus more popular – bicycles fell out of favor for adults in the U.S. and were considered to be a children’s toy.

Socks may be the default Christmas gift when better ideas fail to appear, but one can’t argue with the jolliness of the Interwoven Santa Claus.

“But sometimes I wish—how can I say it? He wants so much to please me—only, like other men, he’s just a bit unseeing….I can’t say this to my husband. But I can say it to other husbands like mine: Why not give her this year what she really wants? A Hoover.” [WARNING: Advice may be faulty.]

The Health Builder was manufactured under the auspices of John Harvey Kellogg of the Kellogg cereal empire. They employed Dorothy Knapp, “The Most Beautiful Girl in the World,” to sell the shaking machine.