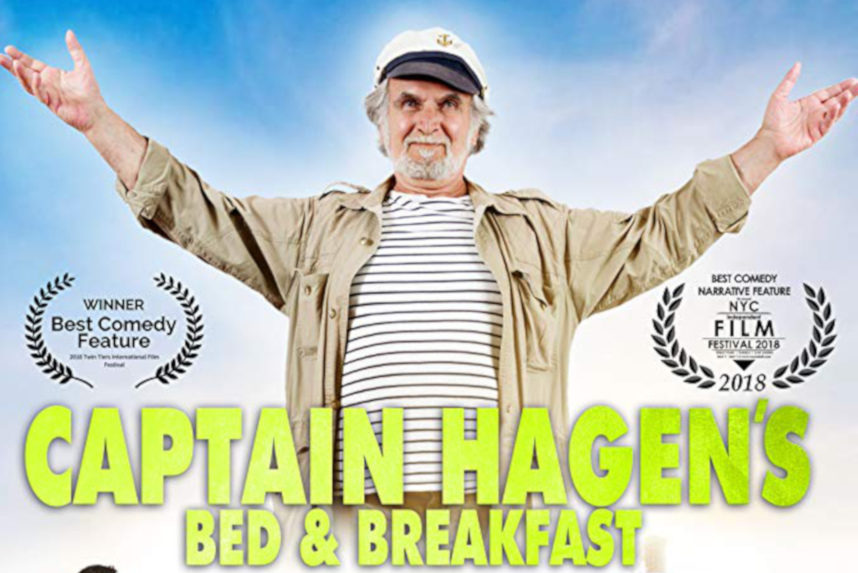 Independent film can be something of a loaded term. With the indie film boom of the ’90s, a number of pictures that represented the independent spirit still had big money or big studios behind them. During the 17 years that Miramax was producing critical darlings like Pulp Fiction, it was nevertheless owned by Disney. With that in mind, the act of actually making a truly independent film becomes all the more impressive. Rafael Friedan has done just that; his film, Captain Hagen’s Bed & Breakfast, is making the major leap from festival winner to iTunes and Amazon this weekend. It’s an achievement that does more than defies the odds; it actually inspires.

Unlike some filmmakers who grew up in front of the television, Friedan himself didn’t have a TV in the house until he was in seventh grade. “But,” he says, “[my parents] took me to the movies a lot when I was younger.” His desire to make films happened later. He says, “Through high school and the first half of college, I spent the summers working as a camp counselor in the Hamptons section of Long Island (where I would later film Captain Hagen’s Bed & Breakfast). After my sophomore year at the University of Pennsylvania, my parents told me it was enough already with the camp counselor thing — I needed to get a summer internship that was career-oriented.”

Friedan was asked to join one of his fraternity brothers who was going to Los Angeles for a film internship. His duties included the usual, like making copies, but he also had the opportunity to read film scripts and write “coverage.” He says, “Coverage is basically like a book report for a script (synopsis + analysis), so that an executive doesn’t have to take the time to read the whole script. This is the part of the job that I enjoyed and that I got very positive feedback from my employers about. They told me I should become an executive at a studio or production company.”

After college, Friedan got a job as an assistant with a production company. The experience helped shape his notions of what he didn’t want to do in film. Friedan ultimately decided that he was going to write his own script, and that experience would drive him further.

Even with some experience in the industry, that makes getting a picture made no less a challenge. Friedan says, “In 2015, I was a filmmaker who had never made a film. I had been living in L.A. and writing spec scripts for a number of years without getting anywhere. Then I saw Mark Duplass’s South By Southwest keynote speech. In it, he said take the resources available to you and write a movie around that, and go make it with whatever money you have.”

Friedan’s late grandmother, feminist icon Betty Friedan, had a house on Long Island that the filmmaker could access. With the setting in mind, he decided to write a comedy centered around a bed and breakfast that could all take place in that one location. Friedan says, “Then I quit my job in L.A., moved to NYC, scraped together a few bucks, put together a ragtag cast and tiny, inexperienced crew, and shot the movie over 15 straight grueling days, while we all lived together on the set.”

The film, Captain Hagen’s Bed & Breakfast, evokes the feel of the indie comedies of the 1990s; it’s the kind of story that you might have expected to see Parker Posey or Catherine Keener in at the time. In the movie, four pairs (a middle-aged married couple, male and female besties, a young couple, and a pair of surfer dudes) stay at the titular location, which is run by an eccentric family. Friedan submitted the film for festival consideration, and it won Best Comedy Feature at both the New York City Independent Film Festival and the Twin Tiers International Film Festival. Friedan says that was one of the best things about making the movie: “The movie plays great to a live audience, and getting to experience that was the most rewarding part of this process.”

However, even with festival wins under your belt, it’s still tough out there for someone making a truly independent film. Friedan points to a number of obstacles, which includes “getting your material seen/read by people with the resources to make movies. There’s so many scripts, so many shorts, so many low budget movies even, it’s hard to get to the top of the stack on anyone’s desk, or even to the bottom of the stack . . . just to get on someone’s desk and not “returned to sender” is the biggest challenge.”

Friedan also talked about the movie with NewFilmmakers of Los Angeles.

Friedan has the chance for the film to make a much wider impact as it becomes available for streaming on iTunes and Amazon today. Streaming has been seen by many as a potential game-changer in indie film, and Friedan recognizes that impact. He says, “It’s a lot easier to make your movie accessible to a lot of people (via streaming), but it’s a lot harder to make money. Whereas prior to streaming, a distribution deal meant a substantial amount of money upfront to the filmmakers, now not only is that rare, but some distributors now charge the filmmaker money to distribute their movie. And with so much content on these platforms now, getting people to watch your movie is tough without a big marketing budget. So even though it’s accessible to a lot of people, it doesn’t mean a lot of people will actually watch it because it’s competing with so many other movies and shows.”

In today’s climate, rentals and viewer reviews are incredibly important. He points out that the reality is that first-weekend views and reviews have a huge impact as to whether the film gets in front of more pairs of eyes and shapes more growth for the film’s audience. As he says, “There’s no studio behind this movie running a multimillion dollar marketing campaign . . . it’s just me.” That’s the definition of a truly independent spirit.