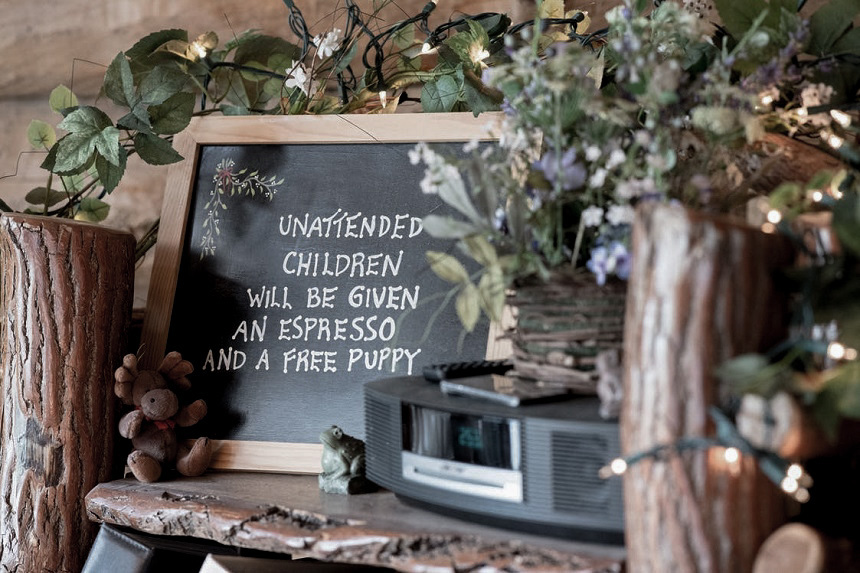 You’ve seen them before, and maybe you’ve even written one (or printed it off with cute, non-threatening clipart to emphasize your good faith): the signs and notes that serve as totally casual reminders for people to behave themselves, essentially. Some are passive-aggressive (“Unattended children will be given espresso and a free puppy”), and some are just aggressive (“Since your MOTHER does not live at this office, please clean up after yourself!”).

While dining at a local establishment, I noticed a handwritten sign on the trash receptacle that read “Please be a SUPERSTAR and don’t throw our trays away!” Of course, everyone knows to avoid tossing plastic trays into the garbage at restaurants, but this sign was implying that someone had been doing just that. Is the sign-maker trying to flatter me into good behavior? I thought. But most of all I wondered: Does it work?

These signs are universally ugly stains on otherwise pleasant spaces, and the behavior advocated by most of them is common sense: watch your children, refill the copier’s paper tray, don’t piss on the toilet seat. In fact, it could be hypothesized that reminding people to do these things — and therefore suggesting that they might not otherwise do them — fosters resentment and possible retaliation. What’s a Type A personality to do?

Adamaris Mendoza is a psychotherapist and communication coach, and she’s been noticing what she calls “common sense signs” more and more. Between restaurants, bathrooms, and taxicabs, Mendoza believes these signs are so ubiquitous that people just don’t see them anymore. The passive-aggressiveness (or whimsical irony, if you like) of some sign-makers is, Mendoza says, a communication strategy similar to that of a lot of social media: capture people’s attention and convince them to do something. There is also a catharsis for the sign-maker because they’ve said their piece, even if it’s ineffective. And Mendoza believes that it probably will be, because “a sign isn’t going to change someone’s values.”

A psychological explanation for whether or not these bite-sized bits of persuasion are effective has been in the works for more than half a century. The reactance theory, proposed by Jack W. Brehm in 1966, describes the phenomenon of “an unpleasant motivational arousal that emerges when people experience a threat to or loss of their free behaviors.” Brehm and many others have studied how and why people rebel against persuasion, demands, and advice for years, and the research has been directed at safe sex and anti-smoking campaigns, political reforms, and water conservation. It can explain why Adam bit into the forbidden fruit and, possibly, why your coworker still leaves their dirty coffee mug on the counter next to your carefully crafted sign advising the opposite.

Attempts to persuade, especially if they convey a restriction on a person’s behaviors, can be met with the boomerang effect, the unintended consequence of a listener — or sign viewer — to think and do the exact opposite of what is being conveyed. This all depends on the message, of course. In a study about sun safety, when the message was framed as a loss (“When you do not use sun protection you will pay costs.”) instead of a gain (“When you use sun protection you will gain benefits.”), participants showed significantly stronger perceptions of threat to their freedom. That threat positively correlated with feelings of anger. Other studies have shown that messaging can work against itself by using controlling language (words like should, ought, must, and need) instead of less forceful terms (consider, can, could, and may). The more a message threatens people’s ability to decide how to behave, the more they are wont to ignore it.

“As a general rule, any communication that generates anger in the target person at the sender or the sender’s message is less likely to be persuasive,” says Timothy Levine, the Distinguished Professor and Chair of Communications Studies at University of Alabama-Birmingham. “It’s hard to sort out ineffective from actual backfire, but being likable is a better bet for persuasion.”

It would be difficult to argue that a sign (especially a wordy, confrontational one) stands much of a chance against our own instincts. So what are they good for? Release, perhaps. The moment of hanging a piquant, articulate message after weeks or months of annoyance, one can imagine, would be an emotional purge. But if the goal is to instill actual behavior change, psychology experts recommend that we avoid robbing people of their own sense of volition while making our requests, perhaps by implying choice. If this isn’t possible, it might not be worth making a sign at all.

I wondered about the “SUPERSTAR” sign and its maker: who were they? Did it work? Was it worth it? So I gave the restaurant a call. Many months had passed, but the employee who answered the phone remembered the sign, although it had since been taken down. He said it was created by a coworker who just liked to draw and make signs while she was bored. He didn’t even remember their having any problem with trays being thrown away. So did it work? “Yeah, maybe?” he said. “I think she just wanted to lighten the mood and create a fun atmosphere.” Basically, it wasn’t that deep.

On a recent return to the restaurant, I noticed a new handwritten sign taped next to the drink machine: “Do NOT order a water cup and fill it with soda! We WILL catch you, and we WILL embarrass you!” Although the threat of humiliation is typically a weak deterrent for me, a shameless writer, I obeyed the warning, because I am also a superstar.