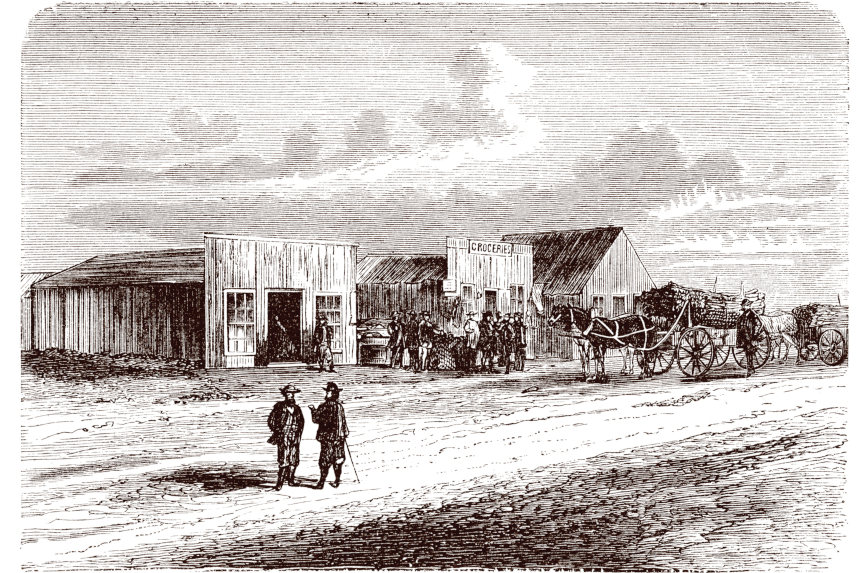 Everywhere American popular culture has penetrated, people use the phrase “Get out of Dodge” or “Gettin’ outta Dodge” when referring to some dangerous or threatening or generally unpleasant situation. The metaphor is thought to have originated among U.S. troops during the Vietnam War, but it anchors the idea that early Dodge City, Kansas, was an epic, world-class theater of interpersonal violence and civic disorder.

Consider this passage from the 2013 British crime novel Missing in Malmö by Torquil MacLeod: “The drive to Carlisle took about 25 minutes. The ancient city had seen its fair share of violent history over the centuries as warring Scots and English families had clashed. The whole Border area between the two fractious countries had been like the American Wild West, and Carlisle was the Dodge City of the Middle Ages.”

So, just how bad was Dodge, really, and why do we remember it that way?

“A gentleman wishing to go from Wichita to Dodge City, applied to a friend for a letter of introduction. He was handed a double-barreled shotgun and a Colt’s revolver.”

The story begins in 1872, when a miscellaneous collection of a dozen male pioneers — six of them immigrants — founded Dodge astride the newly laid tracks of the Atchison, Topeka, and Santa Fe Railroad. The town’s early years as a major shipping center for buffalo hides, its longer period as a “cowboy town” serving the cattle trails from Texas, and its easy accessibility by rail to tourists and newspaper reporters made Dodge famous. For 14 years, the media embellished the town’s belligerence and bedlam — both genuine and created — to produce the iconic Dodge City that was, and remains, a cultural metaphor for violence and anarchy in a celebrated Old West.

Newspapers in the 1870s crafted Dodge City’s reputation as a major theater of frontier disorder by centering attention on the town’s single year of living dangerously, which lasted from July 1872 to July 1873. As an unorganized village, Dodge then lacked judicial and law-enforcement structures. A documented 18 men died from gunshot wounds, and news­papers identified nearly half again that number as wounded.

But the newspapers didn’t merely report that news: They interwove it with myths and metaphors of the West that had emerged in the mid-century writings of Western travelers such as Frederick Law Olmsted, Albert D. Richardson, Horace Greeley, and Mark Twain, and in the “genteel” Western fiction of Bret Harte and its working-class counterpart, the popular yellow-back novels featuring cowboys, ­Indians, and outlaws.

Consequently, headlines about seriously lethal doings in Dodge echoed the make-believe West: “BORDER PASTIMES. THREE MEN BORED WITH BULLETS AND THROWN INTO THE STREET”; “FROLICS ON THE FRONTIER. VIGILANTES AMUSING THEMSELVES IN THE SOUTHWEST … SIXTEEN BODIES TO START A GRAVEYARD AT DODGE CITY”; “TERRIBLE TIMES ON THE BORDER. HOW THINGS ARE DONE OUT WEST.”

One visiting reporter remarked that “The Kansas papers are inclined to make mouths at Dodge, because she has existed only one month or thereabouts and already has a cemetery started without the importation of corpses.” Another quipped, “Only two men killed at Dodge City last week.” A joke circulated among Kansas weeklies: “A gentleman wishing to go from Wichita to Dodge City, applied to a friend for a letter of introduction. He was handed a double-barreled shot-gun and a Colt’s revolver.”

The bad news out of Dodge made its major East Coast debut in 10 column inches in the nation’s then most prestigious newspaper, the late Horace Greeley’s New York Tribune. Titled “THE DIVERSIONS OF DODGE CITY,” it condemned the village for the lynching of a black entrepreneur. “The fact is that in charming Dodge City there is no law,” it concluded. “There are no sheriffs and no constables. … Consequently there are a dozen well-developed murderers walking unmolested about Dodge City doing as they please.”

Conditions of well-publicized anarchy, though they sold out-of-town ­papers, were not what Dodge City’s business and professional men wanted. From the town’s founding they had feared more for their pocketbooks than for their lives. Their investments in buildings and goods, to say nothing of the settlement’s future as a collective real-estate venture, stood at risk. For their common business enterprise to pay off, they had to attract aspiring middle-class newcomers like themselves.

And so, in the summer of 1873, Dodge’s economic elite wrested control of the situation. The General Land Office in Washington at last approved its group title to the town’s land, and the electorate chose a slate of county officers, of whom the most important was a sheriff. Two years later, Kansas granted Dodge municipal status, authorizing it to hire a city marshal and as many assistant lawmen as needed.

From August 1873 through 1875, apparently no violent deaths occurred, and from early 1876 through 1886 (Dodge’s cattle-trading period and during its ban on the open carry of sidearms), the known body count averaged less than two violent deaths per year, hardly shocking. Still, the cultural influence of that infamous first year has colored perceptions of the settlement’s frontier days ever since. Part of the reason was a Swedish immigrant, Harry Gryden, who arrived in Dodge City in 1876, established a law practice, inserted himself into the local sporting crowd, and within two years began penning sensationalist articles about the town for the nation’s leading men’s magazine, New York’s National Police Gazette, known as the “barbershop bible.”

In 1883, a Dodge City reform faction briefly assumed control at City Hall and threatened to start a shooting war with professional gamblers. Alarmist dispatches, including some by Gryden, circulated as Associated Press stories in at least 44 newspapers from Sacramento to New York City. The Kansas governor was preparing to send in the state militia when Wyatt Earp, arriving from Colorado, brokered a peace before anyone got shot. Gryden, having already introduced both Earp and his friend Bat Masterson to a national readership, penned a colorful wrap-up for the Police Gazette.

With the end of the cattle trade at Dodge in 1886, its middle-class citizenry hoped that its bad reputation would at last subside. But interest in the town’s colorful history never disappeared. This enduring attention eventually led to Dodge’s inauguration in 1902 as a staple item in the upscale mass-circulation magazines of the new century, including the very widely read Saturday Evening Post.

With that, the dangers of Dodge became a permanent commodity — a cultural production that was retailed to a primary market of tourists, and wholesaled to readers and viewers. Thereafter, writers catering to the public’s fascination with the town’s violent reputation seemingly tried to outdo one another in lurid generalizations: “In Dodge … the revolver was the only sign of law and order that could command respect.” And: “The court of last resort there was presided over by Judge Lynch.” And: “When one was ‘bumped off,’ the authorities just hustled the body out to Boot Hill and speculated upon what else the day would bring forth in bloodshed.”

Dodge’s local handful of yarn-spinners endorsed such nonsense, and bogus estimates of those interred on Boot Hill ranged from 81 to more than 200. By the 1930s, the town’s consensus had settled on 33, a number that included victims of illness as well as violence — but a best-selling biography of Wyatt Earp, published in 1931 by the California writer Stuart Lake and still in print, boosted the body count back up to 70 or 80. Lake’s book’s success, a burgeoning auto-borne tourism, and the Great Depression’s severe economic effect on southwest Kansas collaborated in wiping out any ­remaining ­local resistance to memorializing Dodge City’s bygone days.

Writers catering to the public’s fascination with the town’s violent reputation seemingly tried to outdo one another in lurid generalizations.

Movies and then television also got into the act. As early as 1914, Hollywood had discovered the old frontier town. In 1939 Dodge got major film treatment. But it was a TV series set in Dodge that ensured its continuing cultural importance. Gunsmoke entertained literally millions of Americans for a phenomenal 20 years (1955-1975), becoming one of the longest-running prime-time serials ever aired. Ironically, because the hour-long weekly program appears to have prompted the “Get outta Dodge” trope, the population of Hollywood’s Dodge was an interesting soap-opera collaborative of reasonable citizens beset with weekly onslaughts of assorted trouble-making outsiders. It was a dangerous place only because of the people who did not live there.

Imaginary Dodge is still hard at work helping Americans chart their moral landscape as the archetypal bad civic example. Inserted into the national narrative, it promotes belief that things can never be as dreadful as they were in the Old West, thereby confirming that we Americans have evolved into a civilized society. As it reassures the American psyche, the Dodge City of myth and metaphor also incites it to celebrate a frontier past brimming with aggression and murderous self-defense.