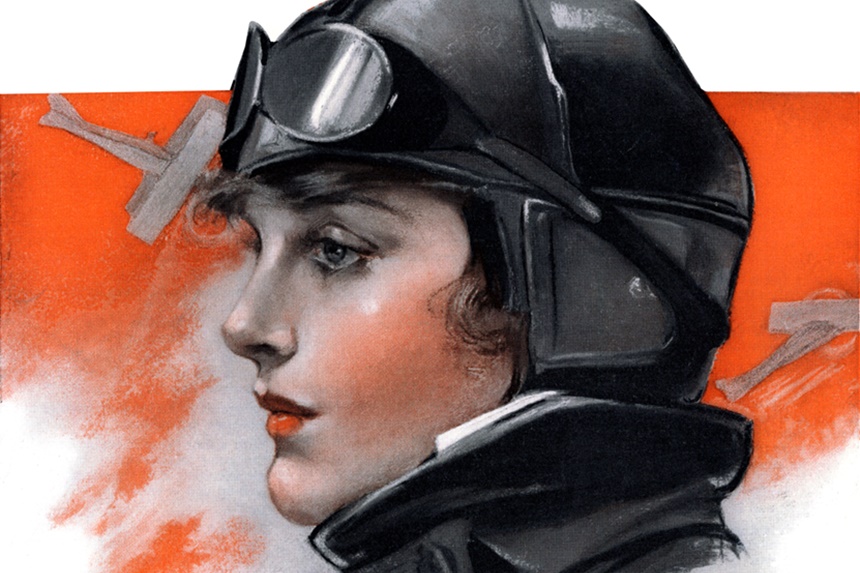 Of all the fascinating characters who created art for The Saturday Evening Post, none was more colorful or interesting than Neysa McMein (1888-1949).

A rare female illustrator in a male-dominated profession, she led a life of adventure and invention. She was an actress, a prominent suffragette, a portrait painter of presidents, an industrial designer of cars, a commercial artist, a political activist, and a public speaker. McMein was friends with everyone from Harpo Marx to George Bernard Shaw. She composed an opera. She rode a camel a hundred miles through the Sahara Desert, where she turned down a proposal from an Arab sheik. When she set up an art studio on West 57th Street in New York, it became a bustling salon for celebrities. Although she was married, McMein was an advocate of free love and open marriage. She had affairs with Charlie Chaplin, Broadway director George Abbott, and author Robert Benchley.

Oh yes, and she was also an honorary sergeant in the U.S. Marine Corps.

Born Marjorie McMein, she reportedly changed her name on the recommendation of her numerologist, taking the name “Neysa” from a racehorse she admired.

Her first jobs were as a millinery designer and an actress. After training at The Art Institute of Chicago, McMein sold her first drawing in 1914. She advanced quickly and within a year, she sold an illustration for the cover of The Saturday Evening Post — the first of nearly sixty Post covers featuring her art between 1916 and 1939.

McMein specialized in pictures of “All-American Girls,” which were very popular with audiences in those days. She was not as versatile as some of the other illustrators at the Post; she largely painted pretty faces against a blank background. However, her images found favor with the public, and McMein’s success expanded into assignments from other magazines such as Puck, Collier’s, McClure’s and McCall’s. When World War I began, McMein turned her talents to making posters for the French and U.S. governments and the American Red Cross. In 1918 McMein and her good friend, the famous author Dorothy Parker, entertained the troops in France. McMein made portraits of the soldiers, drew cartoons for them, and painted insignia on the side of the airplanes of the 93rd Bomb Squadron — quite different from the “pretty girl” pictures she had created for the Post. She went through harrowing experiences on the front, writing, “Since I have lived through air bombing I never will be frightened by anything on earth.”  Back in the U.S. McMein became a major attraction as a speaker at fund-raising drives for the war.

After the war she returned to her career as an artist. McMein was commissioned to create the first portrait of the legendary housewife “Betty Crocker.” In the 1930s, as magazines began turning to photography as a substitute for illustration, she transitioned from an illustrator to a portrait painter. McMein continued to live her life in a social whirl. She was welcomed into the ranks of the group of famous writers and artists known as the Algonquin Round Table. In his autobiography Harpo Marx described that connection:

The biggest love affair in New York City was between me — along with two dozen other guys — and Neysa McMein. Like me, Neysa was an unliterary, semi-illiterate gate-crasher at the Algonquin. But unlike me, she was beautiful and bursting with talk and talent. A lot of us agreed she was the sexiest gal in town. Everybody agreed she was the best portrait and cover artist of the times.

An animated and gregarious hostess, McMein continued to live a fun and lively life, from playing the piano at parties to riding on an elephant in a parade. She entertained friends such as Bing Crosby, Robert Young, and Bennett Cerf, inventing clever word games to amuse her guests.

One of the advantages of a career as an illustrator during McMein’s day was that illustrators worked behind the scenes, with little or no direct contact with a magazine’s readers. Women, African Americans or other groups that might have been denied jobs with a lot of public contact were sometimes able to find gainful employment as long as they could produce good pictures. A person with McMein’s aggressive political and strong feminist views might not have been able to find work in a retail sales position. But McMein was able to lead a boisterous, bohemian, and socially controversial life as readers of the Post admired her “all American girls” on the cover.

Today, few people remember McMein for her lifestyle. She was inducted into the Society of Illustrators’ Hall of Fame in 1984, and is remembered today as a pillar of the illustration establishment.