Are you a Star Trek person or a Star Wars person? You can be both, of course, but if you really think about it, which one do you prefer? I’m Star Trek all the way. The Star Wars story is fine, but I like the Star Trek world more. At least it’s set in the future. Star Wars is set a long, long time ago. Everyone is dead! Also, the restaurants in the Star Wars world don’t look like any place I’d want to eat.

(For the record, I’m also Pepsi over Coke, Mac over PC, and toilet paper over the top rather than from the bottom.)

The ST vs. SW battle took a new turn this week when NASA released pictures that seem to show the Trek Starfleet insignia on the surface of Mars. Sure, it’s probably just some dunes formed by volcanic eruptions and lava flow, but … it looks just like the Star Trek insignia!

The pictures reignited the William Shatner/Mark Hamill faux-feud. Captain Kirk had to weigh in and couldn’t resist getting in a shot at Star Wars, which doesn’t currently have any insignia or logo emblazoned on the surface of another planet. Kirk’s diss prompted a quick response from Luke Skywalker, who said that the formation just looks like a boomerang.

No word yet on what Harrison Ford or Chris Pine think.

The La Jolla, California, cypress tree believed to be the inspiration for Dr. Seuss’s classic environmental book The Lorax has died. Or at the very least it has rotted and fallen over. It was around 100 years old and just suddenly fell over last week (the older I get, the more I find myself just falling over for no reason too).

There’s no definite proof the tree was the inspiration for the story, but Dr. Seuss (Theodor Geisel) lived within sight of the tree and was upset over all of the development happening in the area. Officials are going to try to save what they can from the tree and perhaps plant a new one.

Here’s an interview the Post did with Geisel in 1977.

We all have our pet peeves, those little things that just bug the you-know-what out of us. But I’d like to concentrate specifically on the TV and film pet peeves that drive us crazy. (This is prompted by something someone asked on Twitter, but I can’t find the original poster and I don’t want to spend any more time on Twitter this week, so just trust me.)

I have four big peeves when it comes to television. One is when characters don’t say goodbye when they hang up the phone (you see this a lot on dramas). One person just hangs up on the other. I want the person on the other line to say, “Hello? Are you still there? Hello?”

Another is when something really important happens to the characters when they’re away from home, and then in the next scene you see them entering their homes and saying, “So what are we going to do about this?” What? They didn’t talk about this important thing on the way home?

Number three: When someone just orders “a beer” in a bar, not saying the brand name.

And the fourth is when someone is drinking coffee and the mug or paper cup is obviously empty. You see this a lot on soap operas (or so I’m told by, um, friends who watch The Young and the Restless and are furious at the things Adam Newman is doing).

I was an extra on a 1994 episode of Wings and I had to drink coffee during the scene. There was real coffee in that mug. I was a committed, serious actor.

Gloria Vanderbilt was an heiress involved in the “trial of the century,” a talented artist, and known to most people as the person behind the iconic jeans that bear her name. She died Monday at the age of 95.

Here’s a tribute to Vanderbilt narrated by her son, CNN’s Anderson Cooper.

Franco Zeffirelli directed such films as the 1968 version of Romeo and Juliet, as well as Endless Love, Hamlet (with Mel Gibson), The Taming of the Shrew (with Elizabeth Taylor and Richard Burton), The Champ, and two episodes of the miniseries Jesus of Nazareth. He also produced and directed many stage productions and operas. He died Saturday at the age of 96.

Sylvia Miles was a veteran actress who did a little bit of everything. She received Oscar nominations for supporting roles in Midnight Cowboy and Farewell, My Lovely, appeared nude in the Andy Warhol film Heat, and played the real estate agent who sells Charlie Sheen a condo in Wall Street. She was even the first Sally Rogers in the pilot episode of The Dick Van Dyke Show. She died last week at the age of 94.

Molly O’Neill was an acclaimed food writer and chef, known for her unique looks at American cuisine. She was a columnist for The New York Times and penned many books, including The New York Cookbook, One Big Table, and a 2006 memoir, Mostly True. She won several James Beard Awards and hosted the PBS show Great Food. She died Sunday at the age of 66.

—crime writer James Ellroy, author of the new book This Storm, on not owning a television, never using a computer or cellphone, not keeping track of current events, and writing everything out by hand.

This summer in Texas, you can watch the classic shark movie while floating in the open water. Which to me sounds like watching Airport 1975 while you’re on a flight.

The Ferris wheel was one of the attractions at the World Columbian Exposition in Chicago. And yes, the man who designed it was named Ferris, which is why it should always be capitalized but usually isn’t because it has become a common, generic term (see also: Band-Aids, Kleenex, and Q-Tips). 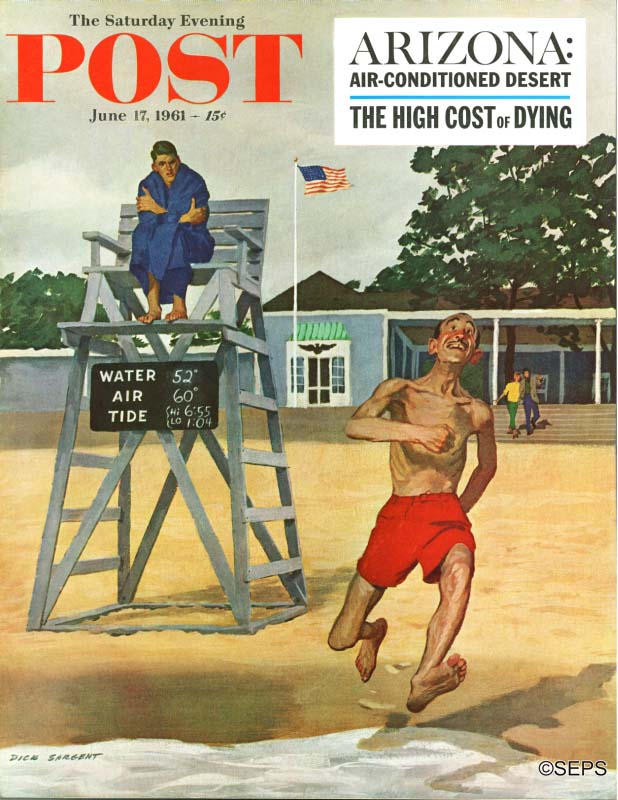 The guy running to the water in this Dick Sargent cover looks really happy, but the lifeguard looks like he just watched Jaws.

The New York Times has an archive of Molly O’Neill’s recipes, including her take on Lobster Chowder, Pistachio-Lemon Bars, and a Poundcake Filled with Fresh Raspberries.

Today is also National Smoothie Day, so it’s a good day to decide to eat a little healthier with this Strawberry Chia Smoothie, a Berry Blue Smoothie, or this Minty Pina Fresca. Which reminds me, I really love Fresca and should start buying it again.

You can also wear them at night.

If you shake someone’s hand this day, make sure they want to shake hands (and whatever you do, make sure you’re actually shaking their hand).