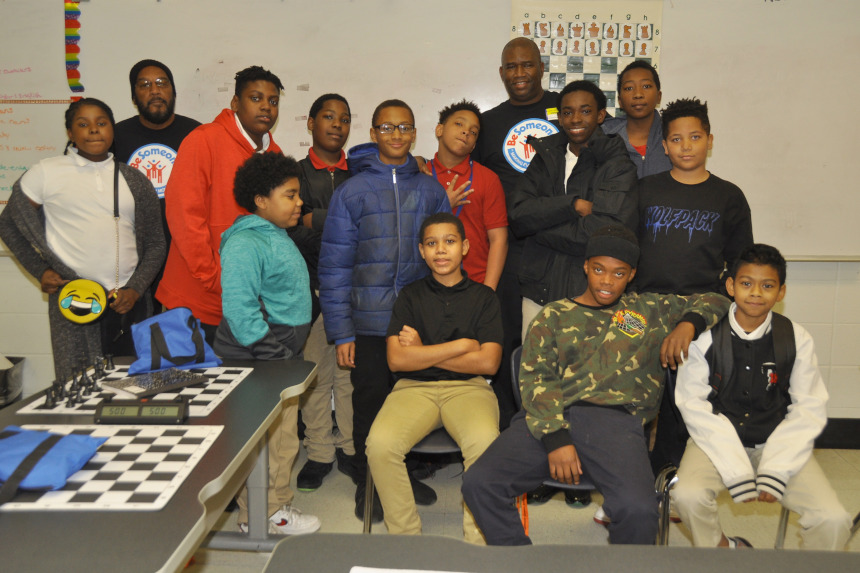 Talk to Orrin Hudson and you’ll hear frequent motivational phrases. “Taking is for losers, giving is for winners,” says Hudson, founder of Be Someone, an organization based in Stone Mountain, Georgia, that teaches chess to at-risk kids. Another favorite for troubled teens: “Think it out, don’t shoot it out. Brains before bullets.” His quip on why failure is part of learning: “Every master was once a disaster.”

As befits a champion chess player — Hudson was the first African American to win the city chess championship in his hometown of Birmingham, Alabama — his sayings are well-calculated. Capturing bishops and knights, to Hudson, is far more than a game. By teaching chess, he’s developing kids’ critical thinking skills and inspiring them to set high goals — to be kings instead of pawns. Every move has consequences, he likes to say, and the loquacious Hudson, a motivational mix of Garry Kasparov, Steve Harvey, and Yoda, has shared that message with roughly 65,000 kids since forming his organization in 2001.

“I’m teaching them that this is a brain game, and you win or lose based on the decisions you make,” says Hudson, author of One Move at a Time: How to Win at Chess and Life. “It’s not where you line up, but where you wind up. Make every move your best move.”

“He’s very charismatic,” says Nataki Montgomery, a longtime Be Someone volunteer whose daughter, a Hudson chess disciple, is now an attorney in New York. “He makes it fun. I’ve seen kids that don’t know anything about chess get really engaged.”

At his camps, Hudson starts with an overview of the game. Sometimes he’ll provide instructions using a life-size chessboard; other times he wanders the room, observing and critiquing as kids play. At one camp he played 59 games at once.

“People watch him and they’re drawn in,” says Montgomery. “He’ll say things like, ‘See what he did? Now this is what I’m going to do.’ People are wondering, What’s the next move going to be? And you’re pulled into the game.”

Hudson’s brother first taught him to play when he was a boy in Birmingham. He was one of 13 children raised by an overburdened mom, and the state moved him in and out of foster homes. By age 14, he was committing petty crimes in a gang. “Mostly we were stealing food,” Hudson says. “One day, we were about to break into this truck and the police came. We took off running. And I thought, This is crazy.”

“He was a white teacher in an all-black high school,” Hudson says. “He taught me chess and purchased me a thick chess book that I read cover to cover. It was the first book I really read. So I started becoming a reader, and started making better grades and doing well.”

By playing chess, Hudson developed discipline, focus, curiosity, and patience. “I owe my life to James Edge,” he says. “He helped me improve my game because he would play me all the time. He would teach me stuff, and I started thinking for myself. Once you do that, good things start to happen. That was a game changer for me.”

After high school, Hudson served in the Air Force as an airplane mechanic and crew chief, and later spent 6 years as a state trooper in Alabama. He was running a used-car business when he saw a news story in 2000 that altered his life. At a Wendy’s restaurant in Queens, New York, five employees were killed, execution-­style, during a robbery; two others were shot and left for dead. The criminals stole $2,400. Even though he didn’t know the victims, Hudson couldn’t shake the cruelty and waste.

“Life has value, and to shoot seven people in the head for $2,400, it ripped my heart out,” he says. “It was a turning point in my life. I said, ‘I’m going to create a program and teach people to put brains before bullets. I’m going to teach young people that there’s a better way.’”

He sold his car business, started the nonprofit, and over the past 18 years, Hudson has helped change the lives of numerous Georgia kids. They are students like Cecil Davis, who credits Hudson for his transformation from goof-off to stellar student after attending his chess camps. Or Aaron Porter, a young man who was nearly jailed for attempted murder. “His father was locked up for 16 years, and he came home, and they got in a fight,” says Hudson. “But the judge gave him one more chance to get his life together.” After working with Hudson, Porter won a state chess championship, despite losing his queen during the match.

“I was so proud because he didn’t give up,” Hudson says of his student, who attended Georgia Tech. “One of the things we teach is don’t focus on what you lost. Focus on what you have and work with what you’ve got. The biggest mistake you ever can make is to give up.”

“He makes it fun. I’ve seen kids that don’t know anything about chess get engaged.”

Hudson calls himself an attitude coach, and he uses frequent chess analogies. Always think three steps ahead, he says. Don’t make the first move that pops in your head. Think before you act. “Most people lose in chess because of greed and impatience, and those are twin killers in business and school and life,” he says.

Montgomery, the veteran volunteer, has relished seeing Hudson inspire others.

“He’s so positive,” she says. “You ask him how he’s doing and he says, ‘I’m fabulous! I’m having a great day!’ You don’t come to his training camp and not get motivated.”

Hudson has received numerous honors from organizations such as the NAACP, the FBI, and Black Enterprise, and in 2018 he was named one of George H.W. Bush’s Points of Light. The awards are nice, but he’s still most passionate about educating, motivating, and instilling confidence in children.

“I tell children, ‘When I look at you, I see me. I was just like you, but here are some things I did differently. And you can too. If I can do it, you can do it. No one is better than you. If we make smart moves, we can get great results.’”