We English speakers are used to seeing the -ward suffix, indicating a direction or tendency of movement, in words like southward, backward, and afterward. But then a strange thing happens with the word awkward. Exactly what direction is awk? And how did the spelling of awkward, with that rare letter sequence -wkw-, become so, well, awkward?

It’s true the -ward in awkward is the same suffix we find in, say, northward. It’s from the Old English suffix –weard, literally “turned toward.”

Awk, derived from the Old Norse afugr, turned up in Old English and meant “turned the wrong way.” In the beginning, awkward meant either “turned or done in the wrong way” or “backhanded,” and it wasn’t the only awk word out there. Awky, awkly, and awkness are all attested in the English language, but they had become obsolete by the 18th century. Today, awk lives on only in the word awkward and its various forms.

The general sense of wrongness that awkward carried made it flexible enough to apply in many areas of life and love, so that today we can speak of awkward dancers, awkward situations, awkward angles, and an awkward load.

Have you read the word awkward enough now that it ceases to look like a real word? In my opinion, that isn’t just semantic satiation; awkward is autological — it’s a word that describes itself, like multisyllabic, noun, and unabbreviated. Awkward is awkward to write and to read.

Though that -wkw- combination is rare in English, it isn’t, I discovered, unique to awkward. It also appears in hawkweed, a plant related to the dandelion and with a similar yellow bloom. 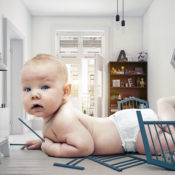