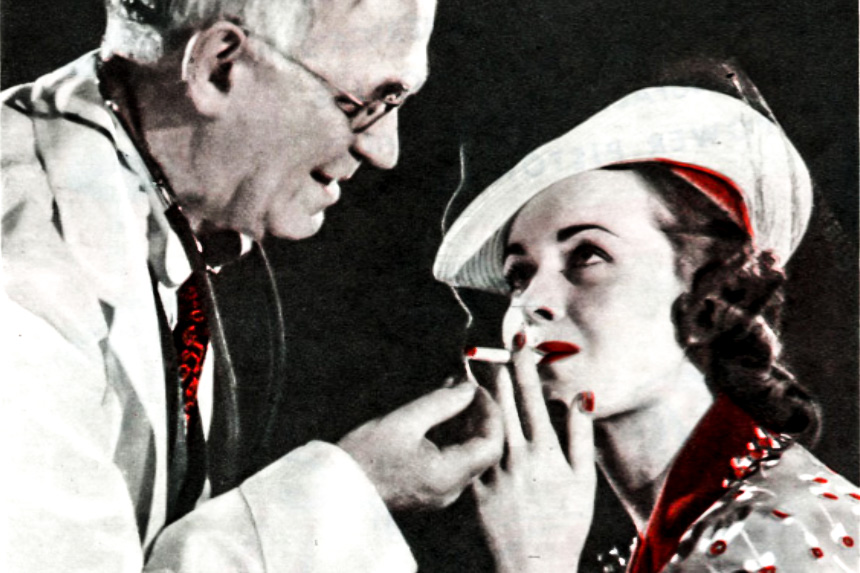 Smoking cigarettes during this time period was as ubiquitous as drinking soda pop. Although a full-fledged public health campaign against tobacco was still decades away, anxiety about smoking and its negative health effects could be found going back to the turn of the century. Big players like American Tobacco Company, Philip Morris, and R.J. Reynolds sought to soothe these fears by using advertisements to marry doctors and cigarettes in the American mind.

Otorhinolaryngologist Dr. Robert Jackler, of Stanford University, and his wife Laurie founded the group Stanford Research into the Impact of Tobacco Advertising, and they compiled around 50,000 original tobacco advertisements, many of them from this magazine. The collection ranges from the absurd to the bizarre, with images of storks taking smoke breaks, cigar parents raising cigarette babies, and children smoking while their parents look on and giggle. Some of the most surreal ads, from today’s perspective, feature doctors touting the benefits of smoking certain brands. In April, Smithsonian’s National Museum of American History opened an exhibit called “More Doctors Smoke Camels” that showcases many of these American artifacts. Jackler says many museum visitors have gawked at the ads and their health claims in disbelief, but these images and their style of persuasion set precedence for all kinds of health-based advertising.

In the 19th century, it was widely believed that smoking could actually cure some ailments. For asthma, bronchitis, hay fever, and influenza, Cigares de Joy advertised “immediate relief.” Similarly, Marshall’s Cubeb Cigarettes could supposedly “absolutely cure” all of those, along with the buildup of mucus known as “catarrh.” Inhalation of smoke had long been a health concern, but well-known European doctors promoted smoking cubeb (tailed pepper), stramonium (jimsonweed), and even tobacco to ease coughing fits. These half-baked remedies coincided with the growing popularity of smoking tobacco as a signal of economic independence and masculinity.

Come the 1900s, everyone seemed to be picking up the habit.

In 1930, Lucky had first made the claim that “20,679 physicians say ‘Luckies are less irritating’” on an ad with a smiling doc offering up a pack of the most popular smokes of the time. American Tobacco Company (the maker of Luckies) hired the advertising firm Lord, Thomas, and Logan to mail cartons of cigarettes to physicians in 1926, 1927, and 1928 with a survey asking whether “Lucky Strike Cigarettes … are less irritating to sensitive and tender throats than other cigarettes.”

In the decades to come, newcomer Philip Morris would claim that their cigarettes were scientifically proven to be less irritating as “eminent doctors report in medical journals.” The company insisted their addition of diethylene glycol — a poison — into their tobacco made it moister and better on the throat, and they sponsored researchers to find as much. In reality, the foundation of their claim was an experiment in which two Columbia University pharmacologists injected the chemical into the eyes of rabbits. Other researchers disputed their results.

Along with its “More Doctors Smoke Camels … ” claim, Reynolds also pushed the idea of the “T-zone test” (for taste and throat), illustrated by a T-shape superimposed on a woman’s smiling face. The diagram was reminiscent of something you might see on a poster in an otolaryngologist’s office. This came years after what Jackler called “perhaps the strangest claim in all of tobacco advertising history”: R.J. Reynolds insisted their cigarettes helped speed digestion by increasing alkalinity (“For digestion’s sake, smoke Camels!”). A 1951 FTC cease-and-desist order prohibited the company from making such claims, but that ad campaign had come and gone.

Two years ago, Dr. Jackler released a paper on a lesser-known advertising strategy of the tobacco industry from the 1930s to the ’50s. In order to court doctors directly, tobacco companies took out ads in most weekly and monthly medical journals, and particularly the Journal of the American Medical Association (JAMA). Since advertisements were often scrapped before the journal’s archives were bound, many of these ads were forgotten, but Jackler’s team compiled more than 500 of them. “Not one single case of throat irritation due to smoking Camels!,” a 1949 JAMA ad reads. “Put your stethoscope on a pack of Kools and listen,” a 1943 ad beckons. Philip Morris flirted with absurdity in a 1942 ad emblazoned with the suggestion “What! — Prescribe Cigarettes?”

“Even though more and more data was coming out about lung cancer and eventually chronic lung disease and heart disease, so much money was coming to medicine journals [from tobacco companies], particularly JAMA,” Jackler says. In 1949, the AMA received 33 times more income from JAMA’s advertising than from membership dues.

According to Dr. Jackler’s paper, JAMA’s editor-in-chief (from 1924 to 1949) Morris Fishbein made a slow transformation from tobacco critic to consultant over the course of his career. In the late ’20s and early ’30s, Fishbein authored books and editorials criticizing cigarette advertising and the medical industry’s advertising practices more broadly. Fishbein developed a relationship with Philip Morris, however, that evaporated his skepticism in the years to come. He maintained correspondence with the company to help them create ads and even authored an editorial defending their use of diethylene glycol after 75 people died from poisoning in 1937. Fishbein ruled the journal with an iron fist throughout the ’40s, squashing dissent against its advertising practices and even ignoring calls from the board of directors to rein it in. When the protest of physicians against tobacco advertising in JAMA grew too large, the journal finally ceased publishing tobacco ads in 1954. The same year, Fishbein took a job with Lorillard Tobacco Company, making the equivalent of about $240,000 a year in 2019 money. As late as 1969, Fishbein publically doubted the link of cigarettes to cancer, calling it “a great propaganda.”

Tobacco ads on television and radio were banned in 1971, and the Master Settlement Agreement in 1998 curtailed other forms of tobacco advertisement. Tobacco companies can still advertise in print publications, although there are far more restrictions for those today. Health claims are out of the question.

A study on tobacco advertisements in magazines in Preventive Medicine found that cigarette ads increased more than threefold in publications like Rolling Stone, Star, and Entertainment Weekly from 2010 to 2014. Of course, e-cigarette advertisements have also taken off in recent years. It is possible to grab a magazine in a doctor’s office waiting room and find a full-color ad spread that calls attention to the “experience” or “taste” of tobacco, but the chance remains unlikely that we will ever again see any featuring the doctors themselves. The 1.95 percent of doctors who do smoke — according to JAMA’s latest numbers — aren’t likely to flaunt it anyhow.