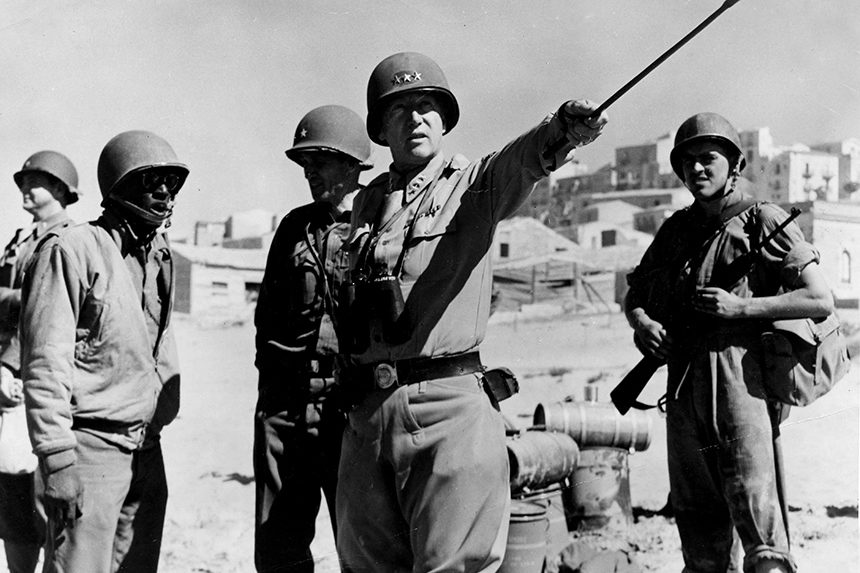 They say the very act of putting a story on film, however true its source material may be, immediately mythologizes it. But what does it do when the figure it represents is already a kind of mythic enigma? That’s part of the intrigue surrounding Patton, the 1970 classic about General George S. Patton, the heavily decorated commander that cut such an important figure in World War II. Here’s a closer look at the celebrated film, which arrived in theaters 50 years ago today.

1. Coppola Got Fired Before Winning an Oscar.

Francis Ford Coppola has a sterling reputation in film, but he hadn’t been around too long when he co-wrote the screenplay for Patton with Edmund H. North. Still, he was seen as an up-and-comer whose films like The Rain People were drawing notice. Nevertheless, the studio wasn’t wild about his concept for an incredibly stylized opening featuring Patton addressing unseen troops while standing in front of a massive American flag. Coppola’s refusal to compromise on the approach led to his dismissal; however, star George C. Scott said he wouldn’t play the title role unless they used the Coppola-North draft. It turned out to be a good call for everyone involved, as the screenplay ended up winning an Oscar.

2. The Opening Became an Instant Classic.

The opening scene of Patton. (Uploaded to YouTube by Movieclips)

Speaking of that opening, that no-nonsense speech set the tone for Scott’s no-nonsense portrayal and got audiences talking. Since that time, it’s been quoted and parodied in everything from sitcoms to animation. There is one line that hit’s close to home, as Patton takes a moment to rail against generals that celebrate the individuality of troops in The Saturday Evening Post. To the best of our understanding, the real Patton took umbrage with a profile from the magazine, possibly one of the “These Are the Generals” series of profiles that ran in 1943. We couldn’t find the exact segment that might have aroused the general’s ire, but it’s a line that’s nevertheless immortalized onscreen.

3. The Film Won a Battlefield’s Worth of Awards.

The film follows Patton from 1943 to 1945, starting with his assumption of command in North Africa to the rebuilding process in Germany. Scott plays Patton with steely conviction and an unwillingness to compromise that put the real general through a cycle of losing and regaining various commands. Patton proves himself repeatedly, particularly during The Battle of the Bulge at Bastogne. The epic approach and Scott’s performance powered the film to 10 Academy Award nominations. It took seven, including Best Original Screenplay, Best Actor (for Scott), Best Director (for Franklin J. Schaffner), Best Film Editing, Best Sound, Best Art Direction, and Best Picture.

Despite the fact that Scott won Best Actor, he refused to accept it. The declination was a matter of principle for the performer, as he had no love for either the voting process nor the entire notion of competitive prizes for acting. However, Scott did accept his acting recognition from the New York Film Critics Circle; according to the book Inside Oscar by Mason Wiley and Damien Bona, Scott’s wife at the time, actress Colleen Dewhurst, said, “George thinks this is the only film award worth having.”

While the film continues to be regarded as a classic piece of cinema, many fans don’t realize that Scott actually returned to the role in a made-for-TV film in 1986. The Last Days of Patton, quite literally, covers the last days of Patton. On December 9, 1945, one day before he was set to return to the U.S. from Germany, Patton was in a car accident that paralyzed him. The film covered various moments of his life in flashback. He died in his sleep on December 21, and was interred at the Luxembourg American Cemetery and Memorial. Patton himself had chosen the cemetery, as he wanted to be buried alongside the men he’d commanded while leading the U.S. Third Army.