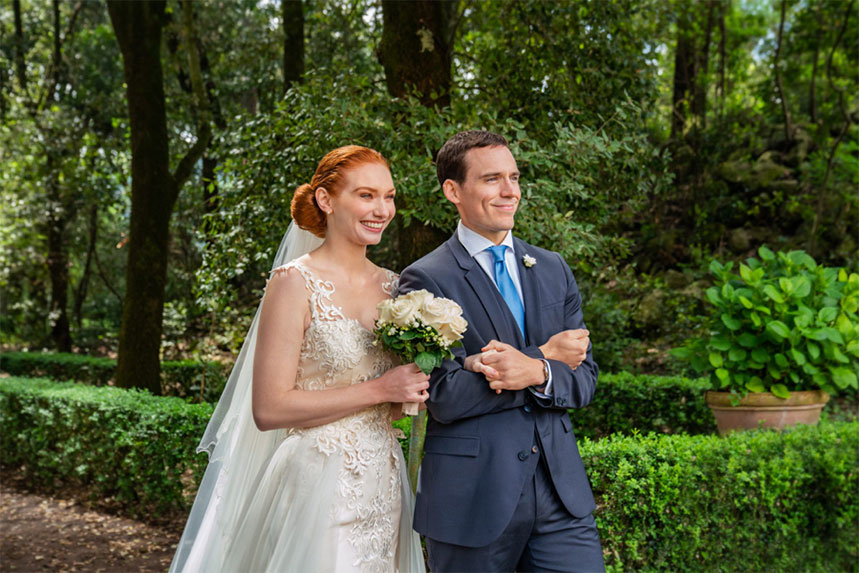 Man, I am so tired of thinking so much. I know movie reviews need to preserve their shelf life, and thus should avoid trading in current events, but as I write this — in the depths of America’s 2020 COVID-19 pandemic — I really, really appreciate any opportunity to turn my brain off and go somewhere else. Anywhere else.

So, at any other time would I award four stars to Love Wedding Repeat, the most frothy of romantic comedies, a film that cribs shamelessly from much better films like Four Weddings and a Funeral and Groundhog Day? Probably not.

But I laughed at Love Wedding Repeat. I liked most of the characters. I was dazzled by the Rome setting. And the story is so unabashedly silly, so proudly implausible, that I very soon lowered my 24-hour force field of dread-fed skepticism and willingly wallowed in its ridiculous excesses.

Sam Claflin (Me Before You), ably filling a role that would once have been claimed by Hugh Grant, plays Jack, the doting brother of a bride named Hayley (Poldark’s Eleanor Tomlinson, whose radiance intensifies with her character’s desperation). The guests have gathered for Hayley’s sumptuous destination wedding in a Roman villa, but there’s one unwelcome plus-one: Hayley’s old boyfriend Marc (mop-haired Jack Farthing), a coke-snorting train wreck who has arrived determined to stop the wedding and claim Hayley for his own.

Distraught to see her old beau and realizing what he’s up to, Hayley enlists her brother to sneak some knockout drops into Marc’s champagne, thus putting the intruder out of commission for the duration. Jack is understandably reluctant, but he forges ahead, determined to protect his little sis.

There’s just one distraction for poor Jack: One of the wedding guests is an American war correspondent named Dina (longtime Daily Show regular Olivia Munn, who’s a lot funnier than this film allows her to be), a woman with whom he fell desperately in love three years earlier but who slipped through his fingers. Much of the film follows Jack as he frantically tries to manage the steadily escalating mishaps surrounding the drugging scheme while also trying to sweet-talk his way back into Dina’s heart.

The wheels come off the plot so thoroughly it’s hard to imagine a more calamitous conclusion — at which point writer/director Dean Craig (Death at a Funeral) abruptly rewinds the action to the point where things began to go wrong and spins out a completely different scenario.

In version two, things still go wrong — but with vastly more satisfying results.  It’s all explained by the film’s narrator (uncredited, but if that’s not Judi Dench speaking someone has cloned Dame Judi’s larynx): “We live in a universe ruled by chaos and chance, where all it takes is one moment of ill fortune for all our hopes and dreams to go down the (toilet).”

In fact, chance — and its essential role in all our personal histories — is the subtext of Love Wedding Repeat. As Jack’s friend Bryan (Game of Thrones’ Joel Fry) puts it, every one of us is as lucky as we can get: If one single moment of history had been tweaked in some other way; if our parents had missed crossing paths by a quarter of a second, we wouldn’t even be here.

Or as that Dench-y narrator says, “Something as seemingly insignificant as where we’re sitting at a table is actually Chance dictating whether love will succeed or fail.”

Now that she mentions it, about 10 years ago someone sat next to me at a table only because there were no other seats available in the room. We’ll be married nine years next October.

Maybe that’s why I fell in love with Love Wedding Repeat. But darn it, now I’m thinking again…